Sport is one of civilization’s most tried and true methods of escape. It is that rare outlet for our emotions and stressors that we can rely on with certitude. For the unending litany of rules and regulations in modern sports, there are really only 3 outcomes: win, lose or draw (except in America, where we don’t believe in draws). Every game, the objective is exactly the same: put the ball in the back of the net. Cross home plate. Find your way into the end zone. It doesn’t matter that you’ve seen it happen a million times before. If anything, it makes it better. Every year the PGA plays The Masters at Augusta National and the familiarity brings further affection, not boredom. For all the talk of Xs and Os and tactical advantages, sports are not about thinking. They are about passion. They are something for us to lose ourselves in, if only for a few hours. Sports are supposed to be apolitical, but on an international stage that can be increasingly difficult. When Iran defeated the United States to knock them out of the World Cup in 1998, the victory meant more geopolitically than it did on the soccer pitch. People rarely remember that the US hockey team’s Miracle on Ice game against the USSR at the 1980 Olympics was the semi-final game and that we still had to beat a fantastic Finnish squad before getting the gold. If you want to argue that the Soviets were much better than the Finns and that is why we remember that game first and foremost you’re entitled to do so. Then again, Finland wasn’t pointing thousands of Nukes at our shores when the puck dropped. Sometimes we can’t get away from the world when we want to.

Euro 2012: Further proof that every international sporting competition is obligated to have insane mascots

It is against this backdrop that Euro 2012 has begun this week in Poland and the Ukraine. For those of you who only follow the football played with pads and helmets, the Euros are the second biggest soccer tournament in the world after the World Cup, and is played every four years between sixteen European nations over the course of about 3 grueling weeks. It’s kind of a big deal. And, in case your primary news source is Sportscenter, it is worth mentioning that Europe is in extreme economic turmoil at the present. Greece’s anemic economy and government-in-limbo have weighed down the already weak European markets and the looming threat of their leaving the euro zone and switching back to the Drachma from the Euro has the entire world wearing diapers and rubber pants. Add to that the fact that the Spanish banks are about as reliable as a Jaguar X-Type being driven by an sixteen year old, along with the fact that Germany’s Angela Merkel is reprising her role as Scrooge McDuck and we’ve got a seething cauldron of enmity and potential disaster.

On top of all this, the tournament is being played in Poland and Ukraine. In a lot of ways, Poland and Ukraine remind me of Appalachia here in the US. Both areas are characterized by high levels of poverty and aren’t fully integrated into the society around them. Each region also has severe issues related to drug dependency and is ethnically homogenous. It is worth mentioning that Poland is certainly better off economically and geopolitically than the Ukraine, but both nations have not fully recovered from being under Soviet rule for much of the 20th century. As a result, especially in the Ukraine, women have been forced to find a means of subsistence any way they can, which includes entering the world’s oldest profession in large numbers.

Sociologist Olha Balakireva estimates that there are currrently around 50,000 prostitutes actively working in the Ukraine1. Coupled with the lesser amount of sex workers in Poland (estimates vary from a somewhat unbelievable 3,300 to 20,000) and the massive influx of tourists during Euro 2012, the amount of prostitution in the area is supposed to soar over the next month. Prostitution is illegal in the Ukraine, but the laws aren’t actively enforced by police. Arresting sex workers wouldn’t change the problem much anyhow as prostitution is a misdemeanor in the Ukraine and results in a fine of 200 Ukrainian Hryvnias (about $25). Prostitution is legal in Poland, but the use of brothels is not and sex work is not recognized as a legitimate profession by the Polish government. 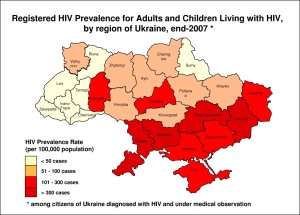 Regional map of HIV prevalence in Ukraine (registered cases only)

The problem isn’t so much the fact that there is prostitution in the Ukraine, but how that prostitution manifests itself and the utter lack of any regulatory measures in place. It is estimated that 1 in 5 Ukrainian sex workers are under the age of 18 and that 3 in every 10 is addicted to drugs. That combination of active drug addiction and unregulated prostitution is a perfect breeding ground for HIV and the epidemic has been skyrocketing since the mid-nineties. With 1.3% of their population living with HIV, the Ukraine has the highest percentage of the virus of any European country. And, just as it has in every place it has touched, HIV in the Ukraine takes a slightly different shape than elsewhere. While in the US the primary modes of transmission are currently male-to-male sexual contact and heterosexual contact, injection drug use plays a much bigger role in the Ukraine. While only about 10% of all recent HIV infections in the US were caused by IV drug use, that percentage increased fourfold in the Ukraine, where it is the leading cause of infection. Heterosexual sex is a close second, resulting in about 38% of HIV incidence in the country, with a staggering 19% being transmitted from mother to child during pregnancy.

Now, as Euro 2012 gets underway, the worlds of commercial sex trade and HIV infection are colliding in a dangerous way. Olha Balakireva, the Ukrainian sociologist cited earlier, says that in places like Kiev and Donetsk, 30% of sex workers are living with HIV. Between the two cities there will be 10 matches played over the next three weeks, including the final, set to be in Kiev. The pressure on sex workers to forego the use of condoms while with clients will be immense. Whether it comes in the form of higher rates or physically abusive clientele, it will happen. It’s the fetid underbelly of the free market. No matter what shape the marketplace takes, there are always going to be those willing to undercut their competition with lowered prices and extra services, even if the product they’re selling is themselves. What we’re dealing with is a new wrinkle to a problem as old as civilization. I know tomorrow’s soccer matches are going to be 90 minutes plus extra time. I also know that the goalies will be wearing different colored jerseys than their teammates and that if Sergio Ramos shoves his studs into the back of Mario Balotelli’s calves when he’s inside the box it’s going to be a penalty and a shiny red card. I know that people will contract HIV in the Ukraine and all across the globe tomorrow. For now, it’s as certain as the ball is round. Let’s hope it doesn’t stay that way.