Home › US Politics › 2016 Election › Stronger Together? Hillary & The Democrats Think So

Stronger Together? Hillary & The Democrats Think So

For as long as I can remember, the Republican Party has always laid claim to the mantel of being the party of morality and that vast assortment of social mores that constitute “traditional American values.” To be sure, they weren’t in sole possession of America’s moral compass, but they at the very least managed to project themselves as the arbiters of the nation’s ethical center. Whether it was Ronald Reagan speaking to the promise of America as that shining city on a hill or George W. Bush espousing the values of “compassionate conservatism” and the need for the United States to serve as the lodestar of liberty for the rest of the world, the GOP had always at least paid lip service to the fight for unfettered freedoms and the bountiful prospects for opportunity that Abraham Lincoln once called the inestimable jewel of our nation. Democrats could try to co-opt the Horatio Alger myths and the Judeo-Christian values that form the core of our national ethos, but for the past half century they have always been rebuked by an opposition party occupying the moral high ground with an armory’s worth of rhetorical weapons and religious surrogates. All of that is changed now.

With her nomination speech last night, Hillary Clinton put an exclamation mark on Democratic National Convention that inverted what has long been seen as an incontrovertible truth in US politics. Along with the astounding oratory of other Democratic leaders like Joe Biden, Michelle & Barack Obama, and her presidential husband, Hillary showed that, for all their virtues and vices, patriotism and morality were not the lone province of the Republican Party and that all of the boundless aspiration and optimism of the Reagan years had jumped over to the other side of the aisle. At a time when much of the country is struggling financially and the specter of terrorism looms over us in as menacing a manner as ever, the message from Democrats was not to scream that the sky is falling, but to exclaim that the sky is the limit, while simultaneously acknowledging that we will not be able to touch it overnight. As Clinton said in her nomination speech last night, quoting Lin-Manuel Miranda’s astounding musical Hamilton, the mission of the Democratic Party will be one of “planting seeds in a garden you never get to see.” 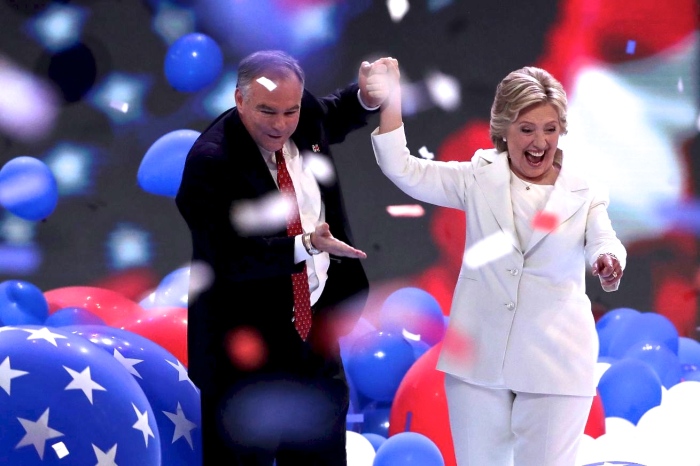 This was a stark contrast from the GOP Convention last week, where the overarching message was not so much that America was still that shining city on a hill, but that roving bands of homicidal Muslims, immigrants and minorities had started breaking shop windows and setting that city on fire. I watched all 4 nights of the RNC from start to finish, and the only things that could have been construed as consistent themes of the convention were the belief that Hillary Clinton should be incarcerated, the idea that America had gone to hell in a hand basket and the assertion that Donald J. Trump was the only person who could fix it. If there was any semblance of hope or optimism that went beyond the ominous repetition of how Donald Trump was going to make America great again, I must’ve missed it. In the end, it was little more than a carnival without the calliope music and with a second-rate, gold-plated Mussolini impersonator as its ringleader.

There will certainly be plenty of lines from Hillary’s speech last night that get played in campaign ads and the media from now until November, many of them pointing out the unfitness of Donald Trump for the Presidency. Whether it’s lambasting his claims that he knows more about ISIS than US generals do or pointing out that, “a man you can bait with a tweet is not a man we can trust with nuclear weapons”, Hillary made abundantly clear, just as speakers from President Obama and Senator Sanders to Michael Bloomberg and Retired General John Allen did earlier in the convention, that we cannot trust a man like Trump as our Commander in Chief. However, the one I will remember longest and which I think is best representative of this Democratic National Convention and the trajectory of the Democratic Party in general came towards the beginning of Hillary’s nomination speech, after she had talked about her experience as Secretary of State informed her view of how other nations see us.

“Don’t let anyone tell you that our country is weak.” Clinton said. “We’re not. Don’t let anyone tell you we don’t have what it takes.We do. And most of all, don’t believe anyone who says: ‘I alone can fix it.’” This projection of American strength and embrace of collaborative action over demagoguery and authoritarianism is at the heart of the contemporary Democratic Party. In a certain way, it’s an extension of President Obama’s “You didn’t build that” speech from the last presidential election, but with better optics. Instead of pointing out—correctly I might ad—that public infrastructure and funding enables business development and encourages entrepreneurship, Hillary essentially replaced government with the American people writ large and swapped American business owners with Donald Trump and his ilk. With this phrasing, moderate Republicans and independents who might have voted for Romney or McCain in the past and who bristled at the notion that they “didn’t build that”, may well be able to identify with the idea of working together to fix out nation’s ills, especially when the alternative is the leadership of a guy like Donald Trump.

The Clinton campaign must spend a good deal of its time fighting back against spurious accusations from Donald Trump and his surrogates and they must go on the offensive to point out the very real danger of his policies, but if they want to win The White House this November, they will do so with the sort of positive, proactive and unifying message that was constant across all 4 days of the DNC. And, if Hillary follows through on her pledges and keeps hammering home her vision for a stronger America, it will be damn hard for Trump to stop her.

Like Loading...
‹ Extremism Begets Extremism: Why The GOP’s Fear Mongering Around Terrorism Makes Everyone Less Safe
Wetting His Dog Whistle: Donald Trump Jr. On The Campaign Trail In Mississippi ›