Against my better judgement, and any consideration of my mental wellbeing, I have watched virtually every minute of this year’s Republican National Convention.What I have seen has not disappointed so far as spectacle is concerned, but has managed to calcify the sense of dread I feel concerning the future of American government. There are plenty of instances that I could cite as the foundation for this sentiment—Chris Christie leading a call and response witch hunt against Hillary Clinton, the mother of a victim of the attacks on Benghazi spouting passionate falsehoods about her son’s death, Laura Ingraham finishing off her speech with a brief sieg heil to an ecstatic crowd—but none of them can properly convey the feelings of quiet astonishment and horror that I felt while watching it.

For 3 days thus far, and surely for a 4th later tonight, this fractured, populist permutation of the Republican Party has been whipped up into a frenzy by a hodgepodge of right wing talking heads, conservative celebrities, Tea Party politicians and the entire Trump family. There has been an almost complete absence of discussion around policy and, as has been Trump’s wont and custom, fact-driven narratives have been replaced wholesale for ones devoted to arousing feeling. In the absence of the last remaining vestiges of moderation in the Republican Party, this year’s convention has been overrun by hoards of parasitic political ticks, bloated with venal ambition and held aloft on a fetid current of self-aggrandizement and bile.

Newt Gingrich. Chris Christie. Rick Scott. Mike Pence. Donald Trump. These men are the lowest common denominator in American politics. They are gutless, spineless vessels of enmity and egotism whose political philosophies are based wholesale on bluster and unyielding ignorance. In listening to Gingrich’s unhinged screed against the forces of peace and restraint on Wednesday night in which he reintroduced the canard of weapons of mass destruction into our political dialogue and prophesied the nuclear obliteration of our nation’s big cities, I was reminded of the words of one of our nation’s most brilliant, yet under-appreciated orators, Adlai Stevenson, who once said with regards to matters of national security, that emotion is no substitute for intelligence and that rigidity is no surrogate for prudence.

There is no denying the fact that we live in an oftentimes terrifying world. Due in large part to a series of foreign policy blunders from successive Republican and Democratic White Houses, the world is facing a globalized terror threat in Daesh who, while rooted firmly in the tradition of Islamic extremism first popularized by the Taliban and Al-Qaeda, does not discriminate in who they target for destruction. Unlike their ideological forebears who largely avoided carrying out attacks against solely Muslim targets or bombing Islamic holy sites, Daesh has proven time and time again that they have no regard for any human life that does not stand firmly behind their black flag.

As an organization, Daesh traffics in base fear and human discord because they know that against a people that are calm and united they have no chance of victory. In Iraq, that meant playing the Sunni minority and the Shia majority against each other to foment a civil war and weaken the state to the point where they could take over. In Syria and Libya, it meant predatory exploitation of already existing conflicts, using military weakness and tribal balkanization to enter through the soft underbelly of those countries and converting the disaffected along the way. In Western Europe, Asia and America, they have one primary goal: recruitment. 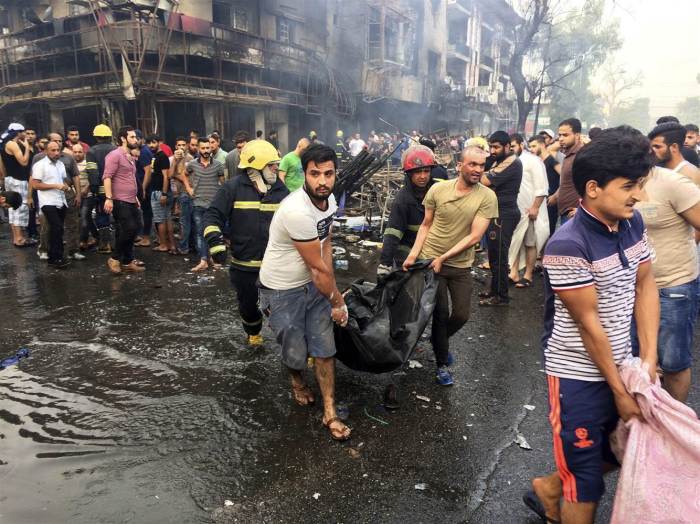 Iraqi citizens carry away the 2 dead bodies away from an Daesh attack in Baghdad earlier in July that killed over 200 people.

With each terrorist attack in Brussels or Paris or Istanbul, Daesh not only succeeds in their short term goal of creating chaos and killing westerners, but sets in motion their long term goal of heightening their global profile and driving the citizens of developed nations into the open arms of extremist groups in their own countries. A moderate and unified West does little to build the ranks of their organization, especially when Daesh spend their spare time brutally murdering and marginalizing many of their fellow Muslims in the Middle East. But, if they can stoke the flames of Islamophobia and bigotry high enough that ostensibly free nations are banning the Koran and banning burqas and threatening to place a nationwide ban on all of the world’s 1.6 billion Muslims, then they become capable of recruiting increasingly disillusioned and radicalization-ready Muslims all across the globe.

If Donald Trump is allowed to win the Presidency in November, he and all of the hate mongering politicians who have been speaking at the Republican National Convention will become the greatest recruitment tool that Daesh could have hoped for. All of this harping on the necessity of saying the word “radical Islamic terror” as much as humanly possible and embedding a very visceral fear of Islam in the hearts and minds of the Republican faithful do absolutely nothing to make us safer. On the contrary, this ignorant and purposeful coaxing out of Islamophobic sentiment and the doubling down on the idea of America as some sort of Christian theocracy creates a form of holy trench warfare where American citizens and soldiers are flung into a no man’s land where any permanent gains are made inch by blood-soaked inch.

We cannot give into fear. We cannot allow ourselves to be led into an unwinnable war by our brain stems and our spleens. If Daesh seeks to divide us, we must do everything in our power to remain united—not just at home, but abroad in halls of Western European parliaments and the streets of Middle Eastern nations, where our relative distance from the carnage led by Islamic extremism should enable us to be a tempering force in this fight. It is only with a steady hand and a reasoned mind that we can hope to defeat Daesh and be a positive force for change in the Middle East and across the globe. We need our balance most when the earth shakes, not when it stands still. Right now we need leadership that can serve as a stabilizing influence in America and across the globe. Good luck finding any stability in Cleveland tonight.

Like Loading...
‹ Fear and Loathing (But Mostly Just Fear) At The RNC on Opening Night
Stronger Together? Hillary & The Democrats Think So ›