The Persecuted Majority: A Letter to Governor Pence Regarding The Indiana Religious Freedom Restoration Act

It is with an abundance of gratitude in my heart and relief in my bowels that I write to congratulate you on your decision to sign the Indiana Religious Freedom Restoration Act. I must say that all of this talk of the gays and their supposed rights has given me the most wretched indigestion, which has in turn prohibited my enjoyment of the wife’s excellent pork tenderloin sandwiches. In my advancing years, I have found my capacity for consuming deep fried foods diminishes greatly when agitated, a condition which I invariably find myself in whenever the homosexual agenda forces itself upon my home state. As I’m sure you know, you’re in good company in Washington as Senator Inhofe recently proposed a federal version of the religious freedom restoration act that Indiana and many other morally aboveboard states have enacted. I must say, when I heard that news all of the valves in my intestinal tract and nether regions burst open in celebration and last night, for the first time in weeks, I was able to indulge in seconds of my wife’s cooking without fear of pyloric reprisal.

There is no doubting the fact that the family values which have guided America to her perch of unparalleled prosperity and freedom are under attack today as never before. All across the country, we are increasingly being made vassals under the socialist jackboot of our “Christian” president, Barack Hussein Obama. Even here in a God-fearing, blue collar state such as Indiana, the tyranny of sin-riddled equality has encroached upon our freedoms to an alarming degree. Naturally, there are many causes to this moral disintegration—lack of prayer in schools, UN Agenda 21, Common Core, the NAACP—but, principle among them is the fact that the citizens of The Hoosier State have been prevented from exercising their religious freedoms by an oppressive, secular government. I will remind you that this nation was founded by devout Christians—men of unshakable faith who treated The Holy Bible with the reverence it deserves and shaped our constitution in its image. Today, like never before, the Christian principles of our founding fathers are under attack by those who would demean and cheapen what it means to be an American citizen by allowing the nation’s religion to be denigrated by sodomites and godless queers.

Did you know that today, in Indiana, only 4 in every 5 residents identifies as a Christian? Only 4 in 5! How in the hell are we supposed to protect ourselves when every fifth Tom, Dick and Harry on the street could be some sort of heathen or infidel, hellbent on the destruction of Christian society? Just the other day, a brown fella came into my hardware store with one of those damned beehive wrap thingies on his head asking me if I had any propane torch kits for sale and naturally I told him no. I mean, what if he’d have gone out to the Nativity scene outside the First United Methodist Church and set fire to the face of the Baby Jesus? I couldn’t have lived with myself knowing I sold an implement of destruction to some deviant I don’t know from Adam. Hell, he could’ve been a member of that ISIS or what have you, and I am not going to stand idly by while a bunch of radical Islamists try to establish Sharia Law in Franklin, Indiana—no, sir. 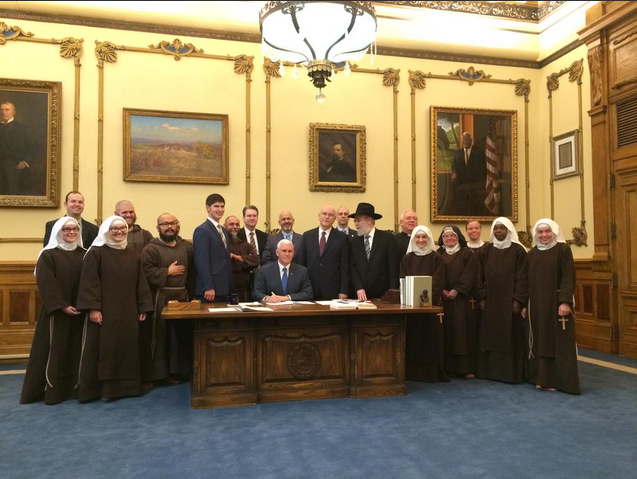 However, as loathe as I am to admit it, the main threat that will be tempered by the Indiana Religious Freedom Restoration Act comes not from Islam, but from a domestic terror that threatens to unravel the moral fabric of our society. I speak of course, about the radical gay conspiracy to force the unholy perversions of the homosexual flesh upon our children and create a nation of godless pederasts, bull-dykes and cross-dressers who will besmirch Old Glory with their sins. It is the only good and Christian thing to do to allow the citizens of Indiana to refuse service to these peddlers of filth. After all, until this act came across your desk, old Jim down at the drug store’s been legally obligated to sell condoms and prophylactic medications and what not to the queers that come into his place of business, which is essentially the same as having the government put a gun to your head and force you to condone the homosexual lifestyle. Not to mention the fact that there’s this little Nancy who sits near me all the time at the counter down at the Flying J—always wearing these skin tight jeans with spangly stuff on the rear with his hair done up like a damned cockatiel—I tell ya, I can hardly stand to eat beside him. Heavens knows the little bastard distresses me something awful, which of course wreaks havoc on my digestive system and the next thing you know bits of my country fried steak are banging around my insides like loose change in a washing machine.

Anyways, that’s enough about my bowels for one letter. Once again, I must thank you Governor Pence for your wisdom and courage in signing the Indiana Religious Freedom Restoration Act. And, if you ask me, any company that wants to leave our fair state because they support gay rights can get out and stay out. Their money’s no good here.

Like Loading...
‹ Reasonable Accommodation: The Supreme Court Case That Will Decide Whether Or Not Mentally Ill Lives Matter
Black Protests, White Coverage: How The Mainstream Media Distorts The Uprising in Baltimore ›