Home › Law › Reasonable Accommodation: The Supreme Court Case That Will Decide Whether Or Not Mentally Ill Lives Matter

Reasonable Accommodation: The Supreme Court Case That Will Decide Whether Or Not Mentally Ill Lives Matter

There are no surer guarantors of the extraordinary than a story which is prefaced by a explanation of how ordinary things had seemed in its beginning. Ask survivors of the attacks on the World Trade Center or Pearl Harbor to describe their experience and they will almost invariably comment on how it started out as a day like any other. And yet, the details of those unremarkable few seconds or minutes before the arrival of the catastrophic become seared in their memory—tattooed on the undersides of their eyelids so that they can’t help but see them as they try to sleep. We remember these things in part because we hardwired to do so, our brains being designed to experience more cellular activity in the centers for emotional processing during negative events—but also because it provides a necessary contrast from the horror and trauma of what we endured shortly thereafter. It is the light through which we process our own darkness.

I have little doubt that Heath Hodge, a social worker who was the supervisor for the counseling staff of an assisted-living group home for the mentally ill in San Francisco, has an all too acute awareness of the comparative normalcy with which the events of August 7, 2008 began. As he was doing his usual rounds and conducting welfare checks on the residents in the home, Hodge didn’t receive a reply from Theresa Sheehan, a woman in her mid-50s who suffers from Schizoaffective Disorder. After calling her name again and not getting a response, Hodge used one of his own keys to enter the room where he found his client lying on her bed with an open book perched atop her face. At first, Sheehan didn’t respond to the social worker, but before long she became irate and leapt from her bed—at least, as much as a morbidly obese fifty-something can leap—yelling at him to get out of her room and threatening him by saying she had a knife with her. Hodge didn’t see the knife at the time, but he still took all of the necessary precautions, emptying the group home of its other residents and then went about filling a section 5150 form, which is the California Welfare & Institutions Code for involuntary commitment.

5150s are not out of the ordinary. In fact, they’re really quite common and, short of a 187—which is the California police code for a homicide—5150s are more a part of the popular imagination than any other piece of law enforcement jargon(1). Involuntary commitments are an increasingly regular occurrence in California and across the rest of the country as police officers are often placed on the front lines of the battle against severe and persistent mental illness in a deinstitutionalized America. Over the past 60 years, the shift from inpatient treatment of mental health issues to often underfunded and insufficient community-based treatment has seen the number of state run psychiatric beds drop from 339 per 100,000 citizens to 14 per 100,000 citizens—the same number of beds per capita as in 1850. As a result, police departments across the country are increasingly being called on as the first responders to mental health crises—a job for which they are often not adequately trained to perform. In some cities, the amount of time that police spend on mental health related cases exceeds that of burglaries or felony assaults, while large police forces like the LAPD have reported spending over 28,000 hours a month on calls related to people suffering from mental illness. In 21st century America, dealing with mental illness is every bit as ubiquitous a part of police life as is issuing traffic citations and answering domestic violence calls, which makes what happened with Theresa Sheehan all the more condemnable. 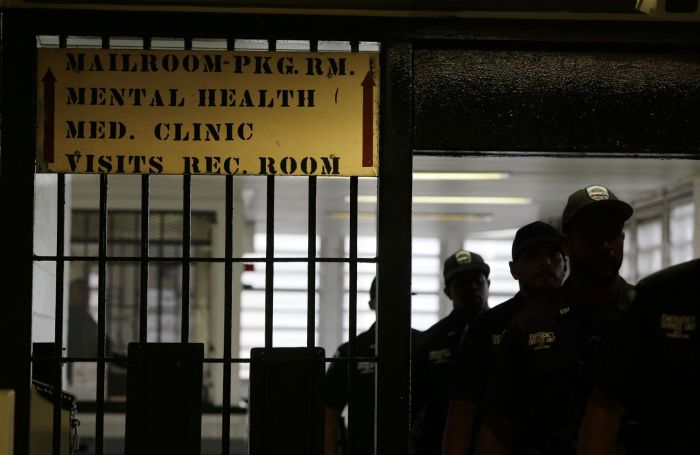 In a deinstitutionalized America, the police are often the first line of defense in the fight against mental illness                (AP Photo/Julie Jacobson)

While he was filling out the involuntary commitment form for Ms. Sheehan, Hodge made sure to check off the boxes indicating that the woman in question was gravely disabled and a danger to others, but did not check the box that would indicate that she was a danger to herself. With all of the other residents gone and Sheehan holed up in her room with no stated intention to leave, Hodge used the the non-emergency line to contact the police, believing that there was no imminent risk of her inflicting self-harm or leaving the room to harm others. Shortly thereafter, Officer Katherine Holder and Sargent Kimberly Reynolds arrived at the house and were briefed by Hodge as to what had taken place. Showing them the completed 5150 form, he ran down the events that had transpired and explained that Ms. Sheehan was a schizophrenic who had been unmedicated for the past year and a half and who had verbally threatened to stab him when he entered her room.

Wanting to ascertain for herself whether or not Ms. Sheehan met the criteria for involuntary commitment, Sargent Reynolds went to her room and, with Officer Holder and Mr. Hodge in tow, knocked on her door. When there was no answer, Hodge opened the door for them, at which point Ms. Sheehan got up from her bed and picked up a small bread knife that she had bought at the supermarket and began walking towards the officers. Holding the knife relatively steady and without making any stabbing motions, Sheehan yelled at the officers, telling them to leave her alone and informing them that she didn’t need their help. The officers then drew their guns and backed out of Sheehan’s room, shutting the door as they left. At that point, the officers called for backup, which arrived with alarming alacrity, with one officer arriving at the scene less than a minute after the call was made. The first officer to arrive was directed to the back of the building to guard the 2nd story window should Sheehan—a 5′ 5”, 250 lbs woman who had made no secret of the fact that she didn’t want to leave her room—try to escape. As the first assisting officer went to monitor the rear of the building, two more officers showed up to guard the front. However, even with all exits guarded, no one in imminent danger and a mentally ill subject who simply wanted to be left alone in her room, Reynolds and Holder busted into Sheehan’s room for a second time.

With guns drawn, the officers encroached on Sheehan’s personal space as she was clutching onto her bread knife and screaming at them “to go away” and “leave me alone.” Sargent Reynolds responded to Sheehan’s pleas by liberally spritzing some pepper spray in her face, causing Sheehan to exclaim that they were blinding her. It was then that the officers shot Sheehan 4 times in the torso and right arm, causing her to crumple to the ground. Then, as she lay on the floor of her own room, Sargent Reynolds shot Sheehan for the 5th and final time, her last bullet striking the wounded woman in the face. As a fitting coup de grace, one of the three backup officers, Constantine Zachos, ran into the room and kicked the bread knife out of Sheehan’s hand. The “threat” had been neutralized.

This week, the Supreme Court will hear this case and judge whether or not the officers in question violated Theresa Sheehan’s 4th amendment rights protecting her from unreasonable search and seizure, and to determine if they violated Title II of the Americans with Disabilities Act in failing to take Sheehan’s mental illness into account when attempting to arrest her. To any rational, compassionate person, the answer to both of these questions would seem to be an unequivocal yes. In her testimony, Sargent Reynolds explicitly stated that she did not consider Ms. Sheehan’s “psychiatric disability” when she forced her way into her room with Officer Holder—a statement which is about as blatant a rejection of the ADA’s requirement that officers provide reasonable accommodation for an arrestee’s disability as can be imagined. At the same time, it should be patently obvious to anyone with even a passing acquaintance with the constitution that breaking down someone’s door against that person’s wishes, without a warrant, without warning and with guns drawn is a violation of the 4th amendment. 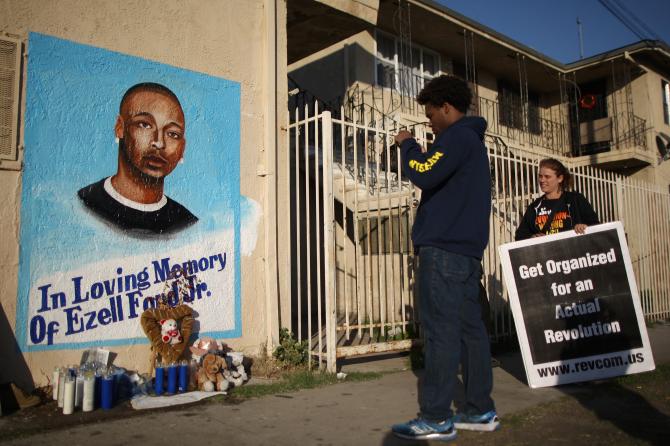 Ultimately, what is at issue in Sheehan v. San Francisco can be found in one simple question: do the severely and persistently mentally ill have the same rights as the rest of us? Surely, most of you who are reading this have seen, or at least heard of, the video of an unarmed mentally ill Skid Row resident being shot and killed by officers or the video of Kajieme Powell, a mentally ill Ferguson man who was shot dead by police outside a convenience store as he was screaming out, “Shoot me! Shoot me! Shoot me now motherfucker!” Just last week a video was released of Jason Harrison, a Texas man who, like Theresa Powell, suffered from Schizoaffective Disorder, and was shot by police with nothing more than a screwdriver in his hand. Unlike, Sheehan, Harrison did not survive his attack.Oftentimes, the racial animus of many white police officers towards people of color coincides with their unjustified fear of those who suffer from mental health issues. However, unlike the shootings of men like Eric Garner, Michael Brown and Tony Robinson which have triggered the #BlackLivesMatter movement and a groundswell of advocacy and activism, the police killings of the mentally ill have not produced a similar effect. There has been no surge in grassroots support for those who have been murdered for the crime of suffering from mental illness. Such news, like that of the mentally ill man in Michigan who was surrounded by police and shot 46 times for holding a penknife, often elicits sympathy and astonishment, but rarely action. With Justice Stephen Breyer not taking part in Sheehan v. San Francisco due to conflict of interest with his brother, who had ruled on the it at an earlier stage, the chances of Theresa Sheehan losing her case are disturbingly real. But, regardless of the court’s final ruling, it is up to all of us to speak for those who, perhaps more than any other subsection of America, cannot speak for themselves. It is up to us to let the world know that #MentallyIllLivesMatter too.

(1)  If you’re a child of the 80s or a metalhead of any stripe, the term probably sounds familiar because Eddie Van Halen was so taken by it that he named his band’s 7th album 5150. On the other hand, if you’re just a millennial or a country fan, it might be ringing a bell because Dierks Bentley released 5-1-5-0 in 2012, a song which contained the chorus, “5-1-5-0, somebody call the po-po” because some pretty young thing was just so damn pretty she drove him insane.

Like Loading...
‹ Mountaineers Are Seldom Free: Union-Busting in the West Virginia Mine Wars
The Persecuted Majority: A Letter to Governor Pence Regarding The Indiana Religious Freedom Restoration Act ›