Home › US Politics › 2016 Election › The Fringe Candidate That Wasn’t: Jack Fellure & The Inexorable Rightward Drift of the GOP

The Fringe Candidate That Wasn’t: Jack Fellure & The Inexorable Rightward Drift of the GOP

It’s half past six on the morning of November 7th, 2012. The sun has finally crept up from under the Atlantic and begins to shine down on the city of Boston. There, in the cradle of Colonial America, sits a distinctly American man, born of an American faith and in possession of a truly American surfeit of wealth. Protected by the prodigious shadow of his family tree and drowning his sorrows in a glass of chocolate milk, Mitt Romney could be forgiven for wishing the sun would take its boisterous luminance elsewhere—perhaps to the shores of Lake Michigan so that it could lift up the curtain on the night Barack Obama and his 65 million supporters were hoping would never end. However, much to the chagrin of the 61 million people who cast their votes for Romney, President Obama still had another hour to revel in his victory before the sun rose and cast its light on the vast sea of problems he would be faced with over the next 4 years.

Halfway through its journey from Boston to Chicago, the sun rose over the Appalachian Mountains and—in doing so—over the tiny town of Hurricane, West Virginia. There on the morning of November 7th, 2012, a 79 year old retired engineer named Lowell Jackson (Jack) Fellure was getting up in the bedroom of his little orange brick split-level, ready to send in the paperwork that would officially kick off his campaign for President of the United States in 2016. One look at Fellure’s official statement of candidacy to the Federal Election Commission tells you pretty much everything you need to know about his chances of electoral success. Using what appears to be—based on the font and the off-kilter placement of his answers in the form’s fill in the blank section—a typewriter, Fellure declares his 2016 candidacy to the FEC the day after the 2012 elections, something no sane or self-respecting Presidential hopeful would do. In the form’s header, using what I can only assume are ink stamps, Fellure has placed an image of a rather ornate looking Bible on the left side and a monochrome American flag on the right. Sandwiched in between those two bits of clip art is the letterhead for Jack Fellure’s “Presidential Campaign Headquarters”, which is actually just a PO Box at the Hurricane Post Office.

A Jack Fellure for President button from the 2012 Election

However, with the mailing of that form to the FEC, Jack Fellure became the first person in America to declare their candidacy for the 2016 Presidential elections and, technically, the frontrunner to win The White House in 4 years time. His fortunes could only go downhill from there. The election in 2016 will mark Fellure’s 8th consecutive run for America’s highest office and there is nothing outside of the candidate’s arguably delusional mind to suggest that this attempt would be any more successful than the previous 7. During his first 6 gos at the White House, Fellure ran as a registered Republican, but in 2011, Fellure switched things up by seeking the nomination of the unbelievably still extant Prohibition Party. It took 2 ballots, but Jack Fellure earned the first political victory of his life when the Prohibitionists who had assembled in the smoke-free conference room of the Holiday Inn Express in the former sundown town of Cullman, Alabama chose him as their Presidential nominee.

Carrying the Prohibition Party mantle on his back, Fellure did better in 2012 than he had in any of his previous elections, but that isn’t saying much. Despite having party backing, Jack was only able to get on the ballot in Louisiana, where he received 518 votes—the lowest of any candidate to be nominated by a recognized political party. Fellure’s showing was so lackluster that his vote total was nearly doubled by Jeff Boss, the nominee for the NSA Did 911 Party (yes, it’s an actual thing), who is in all likelihood a paranoid schizophrenic who claims that the NSA carried out 9/11, paid over 50,000 people $20,000 to keep quiet and currently orchestrates an elaborate web of espionage where NSA agents poison almost all of the restaurants and coffee makers in America. So, if a mentally ill man—a man who believesthat everyone working at the Staples in New York City’s Union Square is being secretly paid off by the NSA and that the only reason the baristas at Starbucks put people’s names on their cups is so they can record everyone they’re poisoning—received nearly twice the votes that Jack Fellure did the 2012 election, it would stand to reason that Fellure’s campaign platform would be just as, if not more, detached from mainstream politics in America. It is not.

The truly terrifying thing about Jack Fellure’s campaign for President is not that it’s a bunch of paranoid psychobabble, but that it is almost identical to that of the right wing of the Republican Party. Fellure’s entire campaign is based around what he believes is a strict adherence to the 1611 Authorized King James Bible, which is really only outré for its insistence on a particular, antiquated printing of The Bible. Other than his fetish for Early Modern English, Fellure’s ideological framework is not terribly dissimilar from many of his fellow GOP candidates for president. On a now defunct website promoting his 2012 campaign, Fellure outlines his campaign platform and his views should sound familiar to anyone with even a passing knowledge of the Tea Party’s policy positions. 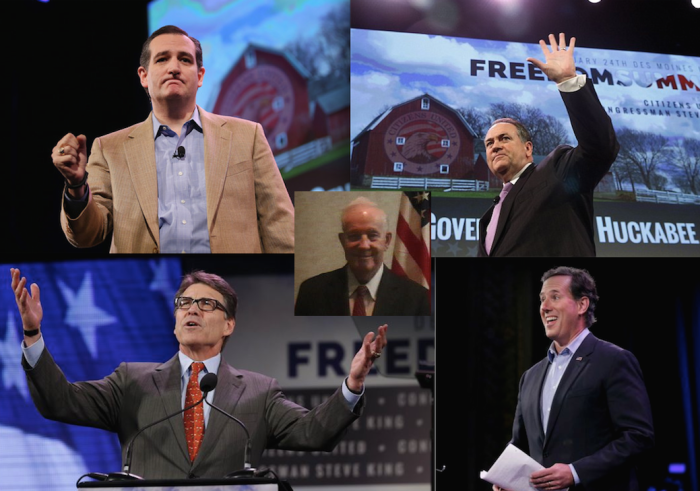 Jack Fallure also states that he is against: “Abortion, and especially paying for abortions with government funding…The Liquor Industry which is a detriment to our nation. Alcohol is America’s number one drug problem…Allowing Anti-American organizations, such as the American Civil Liberties Union and the Communist Party to continue their destruction of this nation…Moving our jobs and industrial production to foreign nations…The continued moral destruction of our society by the television and entertainment media…[and] The New World Order, Pornography, and Gun Control.”

Sure, there’s an extra helping of crazy sprinkled over parts of his platform, but by and large, Jack Fellure’s policies are interchangeable with those of “legitimate” presidential candidates like Mike Huckabee, Rick Santorum, Ted Cruz and Rick Perry. In fact, some of Fallure’s policies—like advocating lowering taxes on working class Americans and acknowledging the often overlooked fact that alcohol causes far more deaths, hospital visits, violent altercations and health issues than other illegal drugs—are beacons of sanity compared to most mainstream Republican candidates. This isn’t to say that Jack Fellure is fit for to be the leader of the free world, because he’s not. Given his age—he’s 83 now—I don’t think the man’s fit to lead anything more mentally taxing than Friday night Bingo down at the First Baptist Church. Then again, I would say the same thing about most of the Republican hopefuls in 2016, so maybe old Jack’s got a shot next November after all.

Like Loading...
‹ Monsters of Our Own Creation: How Nigerian Corruption & Climate Change Gave Rise To Boko Haram
Standing Firm In The Face of Progress: Opposition To Same Sex Marriage in Alabama ›