The War on Drugs Won’t Go Quietly, So Let’s Get Loud

Anyone who knows me well will likely be familiar with the fact that objectivity is not exactly my strong suit. However, I like to think that I normally manage to approach issues that I am passionate about with something resembling courteous restraint. I may want to methodically deconstruct whatever flimsy argument you bring to the table with an uneven mix of statistical analysis and blistering rhetoric, but I will do my damnedest to do so with something like civility towards you when I do so. Now, as is the usually the case when someone starts off by telling you what he or she “normally” does, I am about to provide you with a prescient exception to the aforementioned behavior.

By way of preface, I feel it important to mention that have been in recovery from drug from alcohol addiction for roughly three and a half years. As is the case with most recovering addicts and alcoholics, being a person in recovery makes up a large part of who I am and is every bit as responsible for where I am today as the wonderful parents that raised me and the teachers who taught me. So, it should go without saying that drug and alcohol treatment are areas of particular sensitivity for me. If you step to me with an ignorant, Nixonian view on addiction and alcoholism I will not hesitate to verbally eviscerate until you begin questioning how it was that someone as profoundly stupid as yourself could have gotten dressed in the morning without getting your dick caught in your zipper. When it comes to attitudes towards addiction I do not suffer fools lightly.

This morning, I happened to find myself in a stately hotel ballroom, surrounded by a motley assortment of law enforcement professionals at a conference focusing on drug control. The crowd was about 90% male and 95% white, with an average attendee hair length of about 1¼ inches. Of the men, half looked like extras from The Bourne Legacy, while the other half looked like bit characters in a Cormac McCarthy novel. The women were all dressed like elementary school superintendents. When I walked in to the ballroom, there was a man providing a presentation on drug treatment in corrections. With his authoritarian presentation and dickish veneer, it was clear that he was, or at one point was, a law enforcement official. As he was verbally assaulting the audience, he pointed at a continuum that was projected on a screen beside him. 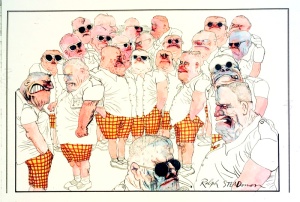 On one side of the continuum was “treatment”, with a bunch of soft, evidence-based and cost effective interventions for substance abuse. On the other side was “accountability”, or, as it’s been known since Hammurabi first took a man’s eye in the name of justice, punishment. This man, who actually had the brass to say that the War on Drugs wasn’t a failure, informed his audience that it was their job to apply enforce accountability measures to make sure “real addicts” might be diverted to treatment while nefarious imposters got locked up where they belong. Over and over again, he stressed this dichotomy between legitimate addicts and drug abusers who knew better. According to him, if you could stop using illegal drugs while you were being drug tested, you weren’t an addict and were just trying to game the system. This man even said, with an air of wistful resignation, that he would lock everyone up if he could, but that they just didn’t have the money.

In light of these comments, I think it might be prudent for make a few observations. I’m a social worker who has experience counseling people struggling with addiction and alcoholism. I have completed hundreds of hours of graduate level training related to counseling and have spent years of my life working at various halfway houses and mental health clinics to hone my skills. I am by no means excellent, but I am good at what I do and, at the very least, competent. Now, do I, as a social worker, go to the DEA and try to tell their agents how to properly search a house for illegal drugs? Do I give CIA agents advice on how to carry out extradition efforts in central Colombia? No, no I don’t. And do you know why?

Because it’s not my fucking job! I have no background or training in shaking down meth labs in rural Indiana so I don’t go about insisting that the local police implement the plans I might think are appropriate. And yet, this testament to the unwavering ignorance of humanity feels it incumbent upon himself to stand up at a national conference and lecture people on who or what an addict is and how we should treat them? Well, law enforcement isn’t normally so fluent in nuanced debate, so let me make my feelings clear in language they might understand. Step…the fuck…back. You people have had 40 years to prove in no uncertain terms that the only thing you were remotely good at doing regarding addiction is finding a way to demonize and criminalize sickness and despair. Since 1971 the amount of incarcerated Americans has increased seven-fold from 350,000 then to 2.3 million today. The War on Drugs has cost us a trillion dollars and has ruined the lives millions of Americans.

If you want to play cops and robbers with drug smugglers, then go right ahead. I don’t think anyone in this country is too fond of Mexican drug cartels and no one would be crushed if narcotics were kept out of the country. The prescription drug epidemic in this country has been fueled in large part by pain clinics and unscrupulous docs who hand out Oxycontin like they were skittles and I would love it if you cracked down on them. That’s what you do. Treating addicts and alcoholics is what we do. And if someone is not addicted, but is still using or selling, then we still treat them. It might not be drug treatment. It may be mandatory job training so they can actually find a job with a living wage and avoid going back to dealing. It might be general mental health counseling or community service. It will not be barbed wire, three hots and a cot. You had your chance and you created the largest sustained prison population in the history of the planet. It’s our turn.