What do you suppose is the going rate for convenience? If you ask pharmaceutical giant and AIDS profiteer Gilead Sciences, the rate for an HIV+ person is somewhere around $29,000. The FDA announced yesterday, amid the media din accompanying the Republican National Convention and Hurricane Issac, that they had approved Gilead’s new “quad” HIV drug Stribild for sale in the US. It’s colloquially referred to as a quad drug because it is a combination of four different HIV medications into one easy to take pill. Gilead also currently manufactures the combination drugs Atripla and Truvada, which currently retail for a modest $22,000 and $13,000 a year. Atripla is a mixture of three HIV drugs, while Truvada is only comprised of two, so it appears that Gilead tacks on an extra $8,000 per annum for each drug they can cram into a pill-cap. The folks at Gilead will try and frame this as progress in the fight against HIV, but what it really represents is swollen pockets for their shareholders and fewer HIV positive Americans with access to life-saving medication.

I have on multiple occasions gone over the reasons for my disgust with Gilead Sciences on this blog1, so I will try to spare you the tedium of repetition as best I can. But, for those of you completely unfamiliar with Gilead and it’s history, there’s really only one number you need to know: 1.98 billion. That’s the amount of money Gilead made in the 2nd quarter of this year alone off of their HIV medications. To put that in perspective, Gilead made as much money off of HIV drugs in 3 months as the 2011 Gross Domestic Products of the African nations Liberia and Guinea-Bissau, combined. Those two countries have a total population of 5.4 million, while Gilead employs about 4,600 people. The amount of money Gilead makes off of HIV is staggering. These people are Gordon Gecko in a white lab coat. 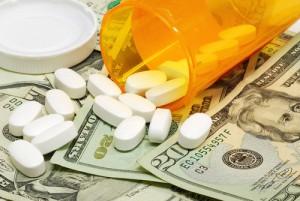 Let’s take their new wonder drug Stribild as an example. Stribild is a combination of four drugs, two of which are old and two of which are new. The old ones are Emtricitabine and Tenofovir, which are the two drugs already being combined in Gilead’s HIV drug Truvada. The other two drugs, Elvitegravir and Cobicistat, are fresh out of the pipeline. The current annual cost for Truvada hovers around $13,000, while Elvitegravir runs at $5,870. Cobicistat is too new to have an estimated price, but the yearly cost of Norvir, an HIV drug manufactured by Abbot Pharmaceuticals and belonging to the same family of drugs, is $3,400. When you add all of those pills together, it comes out to $22,270 a year. Yet, Gilead is marketing their quad drug at between $28,500-29,000. We will be paying these people around $6,500 a year for the luxury of having to take one pill a day instead of three. Each time someone rolls out of bed in the morning and pops their daily dose of Stribild, they will essentially be setting fire to a $20 bill as well.

You may optimistically think that here is the possibility that Gilead is spiking the price of Stribild because the drug is just that much more effective than medications already out on the market. Of course, that possibility is not reality. In recent clinical trials, Stribild was found to render viral loads undetectable in 88-90% of patients after 48 weeks. By comparison, Atripla was found to virally suppress 84% of patients after 48 weeks while the combination of Truvada, Reyataz & Norvir was successful with 87% of those studied. The differences between the three regimens are not significant and certainly not worthy of a $6,500+ price hike. So, maybe it reduces side effects in a way that would vastly improve the client’s quality of life? The San Francisco Chronicle has reported that Gilead found reduced anxiety, dizziness and abnormal dreams in clients who took Stribild when compared to Atripla. However, the FDA discovered an increased number of kidney issues in patients taking Stribild over current HIV medications, with four patients experiencing kidney failure and a fifth developing a rare kidney disease.2 If anything, the side effects from Stribild sound worse than those for existing medications. So, why is Gilead setting the price for the drug so damn high? Because they can.

Gilead is the alpha and the omega of HIV drugs. There’s no one who comes close to approaching the type of market dominance they have. Sure, there are other corners of Big Pharma with a hand in the game, but they’re just treading water next to Gilead. Things got so bad a few years ago that heavy hitters Pfizer and GlaxoSmithKline actually merged their HIV drug divisions in an attempt to keep up. When two of the largest drug outfits on the planet have to team up to stand a fighting chance at keeping pace with your earnings, you know you’re doing pretty well for yourself. And Gilead Sciences knows how well they’re doing. Since they have a virtual monopoly on the market for combination HIV medications, they can price the things any way they please. What’s the federal government going to do? Say, “no, we’re not going to buy your overpriced meds” and let hundreds of thousands of Americans with HIV suffer? They need these medications to live and there’s no real competition in the market for their ADAP/insurance dollar.

Let’s get one thing straight before I end my anti-pharmaceutical tirade: Gilead Sciences is not in the business of helping people. They are in the business of getting filthy f**king rich. Every year there are thousands of HIV+ Americans on ADAP waiting lists as a direct result of pharmaceutical greed and government neglect. Gilead’s new quad drug isn’t going to make that go away. As a matter of fact, it’s going to nurse to problem to health. For $100 million you can provide 4,545 HIV+ folks in this country with Atripla for a year. Do you know how many people you can supply with Stribild for the same amount of cash? 3,448. They’re both combination HIV meds. There is virtually no difference in their efficacy in clinical trials. So the only tangible difference is that the new drug can only treat 75% as many people as the already exorbitantly priced old drug.

When you type “Gilead Sciences” into Google, the first sentence listed underneath the domain name is: “Gilead is committed to ensuring that a drug’s price is never a barrier to access.” Yeah, because $29k a head is just chump change, right? Well, maybe it is to their CEO John C Martin who makes $43 million a year for running a company that cares more about profits than patients. I don’t mean to be all doom and gloom, but if you’re counting on the Gileads of the world to end the AIDS epidemic, you’re in for a prolonged and painful disappointment. But, if you’re looking to make a little money and have no qualms making it off of the suffering of others, you could do a lot worse than buying up some Gilead stock. Something tells me their profits are going to keep moving on up.

Like Loading...
‹ Muzzling The Ron Paul Revolutionaries…For Now
Jill Stein: Activism, Populism and a Bid for The White House ›