At it’s most basic level, incarceration is exchange between an individual and the society in which he or she lives. Before the advent of the carceral punishment, this exchange was pretty direct and tangible. Steal a loaf of bread and you’d have your hand chopped off so others would know you were a thief. Make a cuckold of your spouse and you’d be branded with hot irons to let everyone know of your adulterous ways. This sort of punishment was quite literally an eye-for-an-eye and, even though it is a rather barbaric way of going about things, it was also a pretty straightforward transaction. In recent times, as the prison cell has largely replaced the stocks and the gallows as society’s preferred mode of punishment, this exchange has gotten more nebulous in nature and tenacious in its grasp on those who break the law. Ostensibly, after serving their time in the correctional system, those who have committed crimes are released as free men and women. Their time served, these ex-felons will have—to use the preferred parlance of much of the political class—paid back their debt to society. And yet, for millions of Americans, the debt that they owed to society will have generated so much interest, that they will be forced to go on paying it well after they have been released from prison and often, for the rest of their lives.

On November 24th, outgoing Kentucky Governor Steve Beshear issued an executive order that mandated the immediate restoration of voting rights for all Kentuckians convicted of a nonviolent felony upon their release from prison. At the time of Beshear’s order, Kentucky was one of only three states in America—along with Iowa and Florida—that did not automatically restore suffrage to residents who had committed a felony and served out their sentence. With a few strokes of a pen, Governor Beshear restored the the right to vote for roughly 140,000 formerly incarcerated Kentuckians. But that was a month ago. In the 31 days that have passed since that executive order was issued, the political landscape of the Bluegrass State has shifted dramatically to the right and Kentuckians are quickly discovering that some of their civil liberties have been lost in the shuffle. 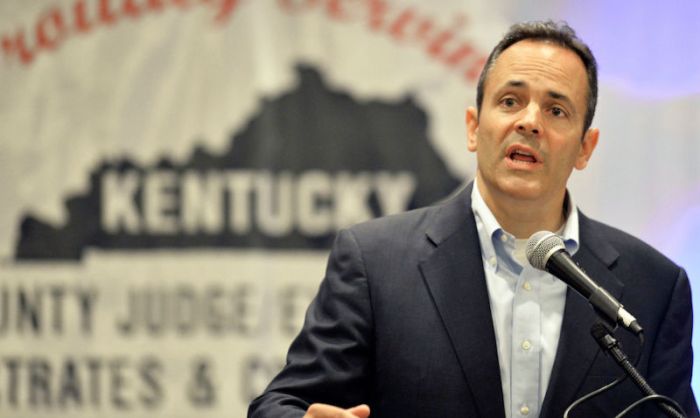 Within 2 weeks of taking office, Matt Bevin had disenfranchised 140,000 Kentuckians

In what a amounts to his first major actions as the newly elected Governor of Kentucky, Tea Party darling Matt Bevin has taken it upon himself to embody the spirit of Ebeneezer Scrooge by issuing executive orders cutting the minimum wage for state employees by almost 3 dollars an hour, removing the names of county clerks (like Kim Davis) from state marriage licenses, and revoking the just recently granted voting rights of ex-felons in the state of Kentucky. Put another way, within a little over a fortnight of his inauguration, Bevin had pilfered almost $6,000 from the annual salaries of the many employees of the state of Kentucky who are making minimum wage, allowed state employees to refuse to sign marriage licenses because they think homosexuality is the devil’s work, and had taken away the right to vote for over 4% of the state’s population.

Now, it’s easy enough to understand why a callous wretch of human being like Matt Bevin would slash the minimum wage for state employees, but why would he be so keen on taking away the vote from Kentuckians who had paid their supposed debt to society through the hellish social construction that is prison-industrial complex? The answer, like the answers to most questions surrounding disenfranchisement in the United States, lies with voters of color. In Kentucky, as is the case in many US states, blacks and latinos are disproportionately represented in the state’s prisons and jails, which means that taking the vote away from ex-felons will have a much bigger impact on those populations. As it stands right now, more than 1 in 5 black Kentuckians are barred from voting due to prior felony convictions, a rate which gives it the 2nd highest black disenfranchisement rate in the nation behind Florida.

In answering questions about his decision to strip the vote from 140,000 of his constituents, Bevin tried to frame his motivation as being purely procedural. “I have been a vocal supporter of the restoration of rights”, Bevin recently remarked, adding that suffrage for ex-felons, “is an issue that must be addressed through the legislature and by the will of the people.” It’s a lovely sentiment, except for the the fact that it’s complete and utter garbage. As was evidenced by his executive order to allow county clerks an avenue through which to refuse to sign same-sex marriage certificates, Bevin clearly doesn’t feel as if the legislature and the voters need to address all issues—just the ones he doesn’t much care for. And, as he acknowledged during his campaign, bills around felon voting rights get routinely blocked by Republicans in the state senate. Given how much he’s disliked among the rank-and-file of his party and how adept he is at pissing people off, Bevin probably couldn’t even get a felon enfranchisement bill passed if he wanted to…which he doesn’t.

At the end of the day, these executive orders are only a sign of much, much worse things that are coming down the pike for most Kentuckians. There is no reason to believe that Matt Bevin won’t do everything in his power to destroy the healthcare infrastructure that has been built up by the Affordable Care Act and cast hundreds of thousands of his constituents off of the rolls of the insured by dismantling Kynect—the state’s healthcare exchange—and rejecting Medicaid expansion. However, the onus for all the pain and suffering that will be visited upon the state of Kentucky doesn’t just lie with Matt Bevin and his supporters, but also with the hundreds of thousands of progressive & centrist Kentuckians who stayed home on election day and with Democratic Party leaders in the state who ran an uninspired, lackadaisical campaign. Kentucky liberals didn’t use their vote in 2015 and, as a result, 140,000 Kentuckians won’t be allowed to vote in 2016.