Last Tuesday, after enduring all of the fallacious bluster I could from the GOP debate in Colorado, I switched over to The World Series, hoping that a little fall baseball could serve as a salve for the aneurysm I could feel percolating beneath my skull. I should’ve known that, even in an off-election year, I would be inundated with campaign advertisements as it’s near impossible to escape to political circus on TV during primetime in late October. Because the Cincinnati market picks up huge swaths of northern Kentucky, most of the ads concerned the soon to be vacated governorship of Kentucky—a battle that not only places the political soul of the Bluegrass State at stake, but one that could prove to be a fatal blow to the state’s wildly successful Affordable Care Act rollout and medicaid expansion plan, which has provided health insurance to over half a million Kentuckians, the majority of whom are part of the state’s working poor. However, it was not the ads for the highest profile gubernatorial race in the country, but for the nation’s most controversial marijuana legalization initiative, that got my attention.

The spot that was on when I flipped over that night featured Oscar Robertson, Cincinnati’s most famous athletic son not named Pete Rose, talking about the benefits of medical marijuana’s use in pain management. In the ad, The Big O urges viewers to vote yes on Issue 3 and help those in Ohio suffering from alzheimer’s, arthritis, glaucoma and other chronic diseases by making medical marijuana available to them. It’s a laudable statement and one that’s backed up by a good deal of research showing it to be a safe treatment for chronic pain (particularly nerve pain), eating disorders, nausea (i.e. for those undergoing chemo or AIDS patients having difficulty putting on weight), and several other medical issues. What Oscar Robertson somehow forgets to mention in this ad are the facts that a) this is a ballot initiative for legalizing the sale of marijuana for personal use and that b) Robertson is a principle investor in 1 of 10 investment groups which make up the organization ResponsibleOhio and stands to make an ungodly amount of money off of marijuana legalization through the ownership of 1 of only 10 state-sanctioned marijuana growing facilities to be allowed under the law. 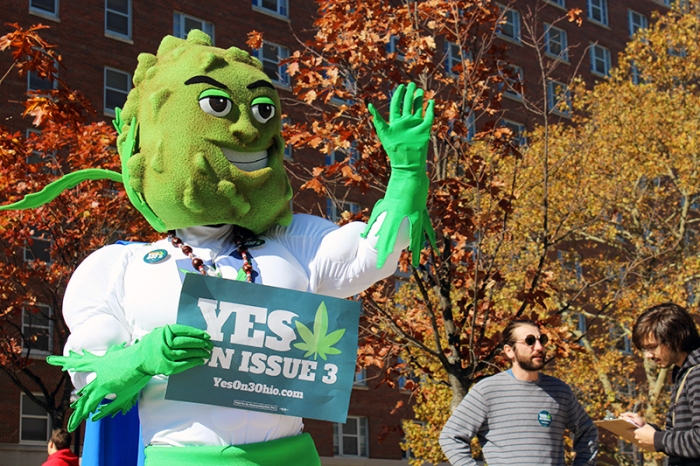 Most of the critiques of Issue 3—especially those coming from legalization supporters on the left—focus on the second unmentioned fact listed above, but before I get to the charges of oligopoly and the corporatization of the legalization movement, I’d like to address the 1st fact, which more explicitly deals with weed as opposed to greed. At the present moment, 23 states and the District of Columbia have laws on the books legalizing the use of medical marijuana, while 4 of those states and DC have legalized it for recreational use. In each previous case of recreational legalization, the state or district in question had medical marijuana legislation in place before it made use of the drug legal for recreational purposes. In Ohio, there are no established medical marijuana laws, which allows for ResponsibleOhio and those who support Issue 3 to conflate two very different arguments.

In another of their ads, ResponsibleOhio tells the story of a young girl and her family who were forced to move from Ohio to Colorado in order to provide her with the medical marijuana that was necessary to treat her severe epileptic seizures. It is a touching story and most voters, unless they had hearts of stone, would support the use of cannabidiol (a non-psychoactive derivation of marijuana) for children who would otherwise endure terrible suffering. However, when watching the ad, viewers may well take away the false conclusion that it was the broad legalization of marijuana that led to an environment where children in need could get the care they deserve when, in fact, one has little to do with the other. Currently, the administration of varying amounts of cannabidiol to children with severe epilepsy and other debilitating conditions is legal in 17 states, including such vociferously anti-drug reform-minded states as Utah and Alabama, along with Ohio’s immediate neighbor to the south, Kentucky. This being the case, it would certainly seem like wedding medical use of marijuana to recreational use can only unnecessarily lessen the chance of the former’s passage (which, according to one poll taken in March, is supported by 8 out of 10 Ohioans), while making the latter look more palatable to voters who are on the fence about recreational legalization.

As for the charges of oligopoly that have been leveled at the supporters of Issue 3, I don’t have too much to say on the construction of the ballot initiative itself or the ways in which it will outlaw small-to-medium sized growers and concentrate an estimated $1.14 billion dollars annually in the hands of a few dozen investors—investors who have put more than 8 times as much money into this campaign as was spent in Colorado’s successful legalization bid in 2012. If you care to know more about the nuts and bolts of that aspect of Issue 3—and the flawed “anti-monopoly” constitutional amendment proposed by state legislators in Issue 2 in response to it—I encourage you check out the coverage from the Cincinnati-based independent paper CityBeat and Ben Woffard’s excellent article for Rolling Stone on the topic.

However, I do believe that more should be done to highlight some of the investors who will own these 10 growing facilities so Ohioans can know exactly who it is that they will be making millionaires tens of times over, should Issue 3 pass. A lot of time has been spent on the more high-profile investors, such as Oscar Robertson and former boy band star Nick Lachey, but I’d like to finish up by taking some time to look at some of their less well-known partners and the man responsible for the campaign itself.

The Investors (at least, the more unsavory ones)

Like many pro-legalization Ohioans, my vote on Issue 3 will not be an easy one, but I cannot in good conscience support a initiative that creates an oligopoly–a Big Weed, if you will–where a handful of wealthy men and women are making millions upon millions after millions of citizens have been locked up and cast off for doing the same. It is a shame that Ohio is having to vote on two separate issues–medical marijuana legalization and recreational marijuana legalization–as if they were one. To those voting for Issue 3 because you or your loved ones desperately want to access to marijuana for issues ranging from severe epilepsy and chronic nerve pain to cancer and eating disorders, I understand your choice and would likely do the same if in your shoes. However, to all of you Ohioans going to the polls tomorrow who consider yourselves left wing (I’m looking at you Bernie supporters), voting for this initiative will require a substantial amount of cognitive dissonance. Better to wait until 2016 and legalize weed the right way–as Colorado and Washington and Oregon have done–than do a big thing badly this year.

Like Loading...
‹ Different Genders, Different Pasts: The Two-Spirit Identity in Native American Life
You Have To Win At Home: How Kentucky’s Governor’s Race Was Decided in The City, Not The Country ›