Home › US Politics › 2016 Election › I Want To Provide Independent Coverage of the 2016 Presidential Primaries, But I Need Your Help

I Want To Provide Independent Coverage of the 2016 Presidential Primaries, But I Need Your Help

Since I started Virally Suppressed over three and a half years, I have done my utmost to provide my readers with investigative journalism and sociopolitical commentary that is engaging, enlightening and empathic. I have probably failed in this endeavor about as often as I have succeeded, but it is my hope that, in the effort, you’ve been able to find reporting here that you were unable to track down anywhere else. In running this site, it has been my goal to illuminate the lives of the underrepresented and overburdened people in America and abroad. Whether it’s been visiting with those being denied the fundamental human right to clean water and air in West Virginia, Appalachia and Detroit or covering the racial injustices in Ferguson and Baltimore, I always try to allow the people I meet to speak through me, to let them tell as much of their story as possible without me mucking it up in the translation.

I bring this up, because it is for this reason that I’ve started an IndieGoGo campaign—Primary Sources: The Making Of The President 2016—to allow me to report on the 2016 presidential primaries on the road. Certainly, I could cover this election season from my home in Cincinnati, using the vast trove of campaign reports and video that crop up every day, but doing that wouldn’t be in keeping with the basic mission of this site and it wouldn’t result in reporting that was all too different from what you find in the mainstream media. Instead, I want to cover the presidential primaries not to focus so much on the candidates themselves as on the people who support or are disillusioned by them.

Now, certainly, I will spend a lot of time talking about the goings on of the various presidential campaigns, but in this project I will try to frame those events through the eyes and minds of folks I meet along the way. I don’t want to waste your time or mine by highlighting every absurd, xenophobic comment uttered by a Donald Trump or a Ben Carson. As far as I’m concerned, the CNNs and the Buzzfeeds of the world already have those bases pretty well covered so there’s not much need for me to throw in my 2 cents worth of hot takes. By the same token, I also have no desire to stoke the already roaring fires of discontent between the supporters of Bernie Sanders and Hillary Clinton with inflammatory invective or lopsided coverage in favor of one side or another. However, in an age where our society is more divided and ideologically rigid than ever and our Twitter feeds and Facebook pages have been tailored to largely reflect opinions we generally agree with, I think it’s truly important to take a hard look at all perspectives, no matter how personally repugnant, in an attempt to take the temperature of where we are as a nation.

The reason why I’m writing this now instead of simply going out and reporting the primaries is that this type of reporting is not something I can do from the economical comfort of my apartment or the coffee shop down the street. In order to reach out and engage the voters in these early primary states to see the problems they face and the issues they’re passionate about, I actually have to go where they are—and that costs money. If you look around my site, you’ll notice that there are no banner or pop-up ads to be found, nor is there any sort of subscription fee. Virally Suppressed is a free site and I very much want to keep it that way. That being said, if I’m going to cover the presidential primaries, I’m going to need financial help to so. Hence, the IndieGoGo campaign. 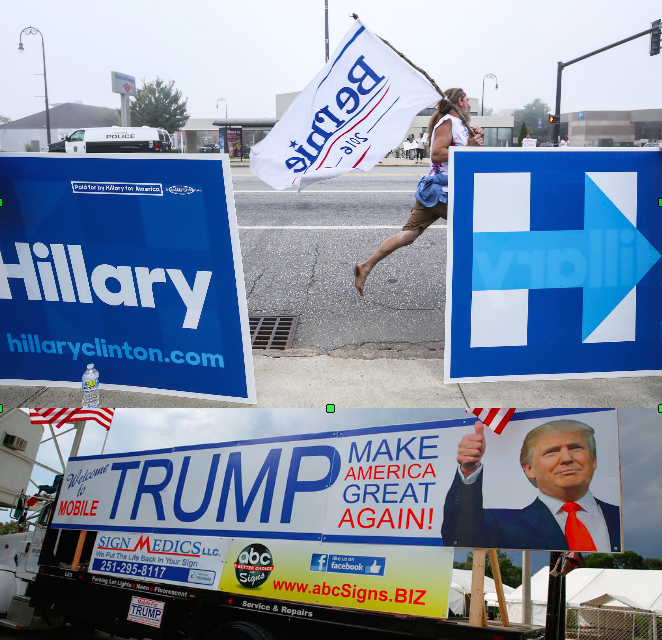 Above: A flag-waving Bernie supporter runs by a pair of Hillary signs. Below: Donald Trump on a flatbed truck (Photo credits: Cheryl Senter/The New York Times & Sharon Steinmann/AL.com via AP)

The $1,500 goal of the campaign is, I think, fairly modest and all of it will be going to gas, lodging and other expenses related to the trip. You will not being paying me for access to the articles so much as providing me with the money I need to be able to write them in the first place. And, the articles aren’t all you’ll receive for your donations. The campaign features a number of perks that range from vintage memorabilia from past presidential races to the ability to commission me to write on a specific issue or candidate while I’m out on the trail. If you can’t donate any money to the campaign, I hope you’ll consider sharing the Primary Sources IndieGoGo page with friends on Facebook or Twitter. Raising awareness can be just as important as raising cash and anything you can do helps.

As of November 1st, I will have officially resigned from my current day job as a case manager and will begin writing full time, with the primaries being my main focus. It has long been a dream of mine to be able to hit the road and cover a US presidential race and this is me, in effect, pushing all my chips into the middle of table. Regardless of how much money I’m able to raise, I will stay out on the campaign trail reporting until every last cent of it is gone. How long I’m able to stay out is in large part dependent on how much support I get from my readers. So, if you value the independent journalism you see on Virally Suppressed and want to see it continue throughout the 2016 primary season, I encourage you to visit the IndieGoGo page for Primary Sources: The Making Of The President 2016 and lend me your support.

Like Loading...
‹ Say It Ain’t So Joe: The Unfortunate Prospect of a Biden Presidential Campaign
Different Genders, Different Pasts: The Two-Spirit Identity in Native American Life ›