I’ve always found it strange that the melting pot is go to metaphor for politicians and public figures looking to expound upon the merits of America’s diverse populous, when all a melting pot does is mix ingredients about until they’re all indistinguishable from one another. Actually, it’s not so much that they’re all indistinguishable from one another so much as they’re indistinguishable from the most potent and prodigious ingredient in the pot. If you’re making a big batch of beef stew and you start off with two pounds of stew beef and a quart of beef broth, the final product is going to taste like beef, regardless of what else you throw in with it. You can add chopped carrots and potatoes and onions to your heart’s content and all you’ll end up with is a lot of steak flavored vegetables. It doesn’t matter what you throw in that pot, it’s always going to end up tasting like beef rather than the other way around.

In the early portion of the 20th century, Henry Ford established a number of different tools to facilitate the “Americanization” of his largely Mediterranean and Eastern European workforce, one of which was the Ford English School, a place where foreign workers could be divested of their own customs and inculcated in American language and culture. In these schools, immigrant workers not only learned the English language, but were forced to adopt dominant, white cultural mores in every aspect of their lives from table manners to spending habits. Upon completion of the program, all of the workers were included in what amounted to a graduation pageant, where all of the immigrants walked off of a “boat” on one side of a stage wearing their native dress, down a gangplank and into an actual, giant melting pot, which was being pantomime stirred by the school’s faculty with giant oars. After all of the workers were in the pot and the teachers had mock-mixed its contents enough, they all walked out the other side, dressed in traditional American garb and waving Old Glory back and forth like their life depended on it. They had been reborn in the image of their bosses and, more perhaps more importantly, their money. E Plurbus Unum – Out of Many, One. 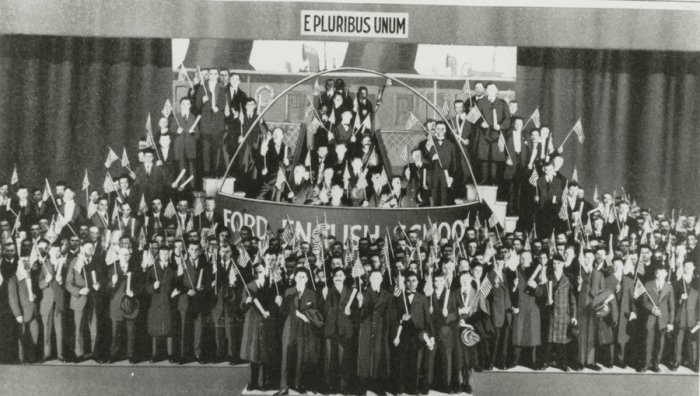 A batch of immigrant workers graduating from the Ford English School, in and around the proverbial melting pot

With this as prologue, it is doubly ironic that the modernist monstrosity that was once hailed by Detroit’s automakers and politicians as the city’s saving grace, would be called “The Renaissance Center.” The word renaissance comes from the Latin renasci, which translates literally as “to be born again.” It was The Renaissance Center’s grand ambition to be the hub of The Motor City’s rebirth. Just as Henry Ford had refashioned culturally distinct immigrants as white bread Americans and transformed the city of Detroit from a mid-sized shipping town into the very hub of the American Dream, the Renaissance Center would rejuvenate Motown and lure back all of the middle-class whites who had abandoned ship for the seclusion and safety of the suburbs. In fact, they would out-suburb the suburbs, building a massive, futuristic office park on the banks of the Detroit River, with a majestic central tower of reflective blue glass and enough shopping and security guards to bring even the most negrophobic housewife and her kids into the city.

None of that happened. There was no renaissance; there was no rebirth. What the city of Detroit got was a continuation of the slow, inexorable rot that has been eating away at them for the past 50 years, and a gargantuan glass phallus in the heart of their city as an ever present reminder of their grandiose failure. Standing more than 100 feet taller than any of Detroit’s other skyscrapers, The Renaissance Center sticks out like a sore thumb in the city’s skyline, only it doesn’t look so much like a thumb as it does a massive modernist dick reaching up towards the heavens. In addition to the central tower, The Renaissance Center is comprised of six other smaller towers, all of which are interconnected and intended to create the feel of a city within a city, a concept that serves only to undercut the notion that this complex could resurrect The Motor City or, at the very least, stave off its collapse.

Walking along Jefferson Avenue, staring at its gaudy, modernist exterior, it’s hard not to feel as though you’re looking at the architectural representation of America’s mid-life crisis. With all its sparkle and all its flash, it almost seems as if The Renaissance Center was designed to distract the world from the city’s ever-increasing frailties—a last gasp misdirection play to try and keep visitors from noticing the uninhibited blight that has been slowly suffocating Detroit since the 1960s. The only problem is, it’s kind of hard to revitalize a dying city when both government and business leaders think that building a waterfront fortress you never have to leave is the best way to fosterwidespread economic growth.

When it was completed in 1977, The Renaissance Center was the tallest all-hotel skyscraper in the world. A public-private venture funded predominantly by Henry Ford II and championed by Mayor Coleman Young, The Renaissance Center was, at the time, the latest in a series of last great hopes to restore Detroit to its former prominence. During a ceremony celebrating the opening of The Renaissance Center, Ford sounded an optimistic note, saying that he, “personally feel[s] Detroit has reached the bottom and is on the way up” and expressing his belief that the Motor City could once again return to the salad days of the 1940s. What Mr. Ford failed to realize, and what any alcoholic or drug addict can attest to, is that when you hit rock bottom there’s normally a pneumatic jackhammer and a shovel on the ground waiting for you when you get there. 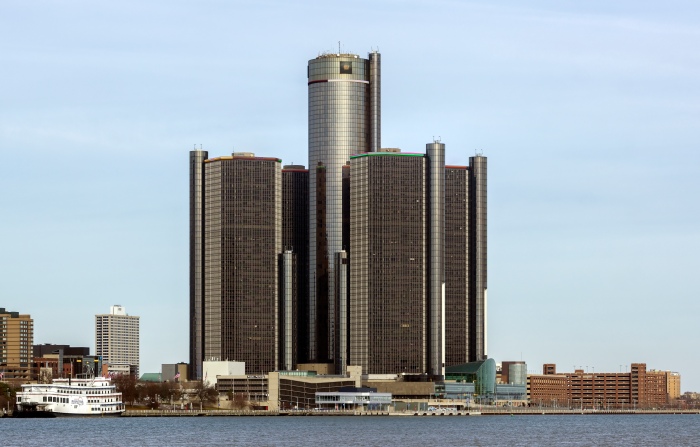 At the time of Ford’s self-proclaimed bottom in the mid 1970s, Detroit had just lost about half a million residents over the preceding quarter century and was sporting a population of around 1.3 million, while the number of manufacturing jobs in the city had been slashed in half over the same period to a then anemic 153,300 workers. Fast forward to the present day and the picture gets exponentially grimmer. As of 2013 (the last year for which we have census data) Detroit’s population is less than 700,000 and the number of manufacturing jobs left in the city sits at about 30,000.  The last time Detroit’s population was this low, Woodrow Wilson was in office, the assembly line was a newfangled invention and The Chrysler Corporation didn’t even exist yet. To say that Henry Ford II’s prediction concerning Detroit’s future was wrong would be to do a disservice to just how wrong he was. Ford was the anti-Cassandra: a man descended from the gods of his time who didn’t know a damn thing about what the future would bring, but who had the ear of everyone around him.

F. Scott Fitzgerald infamously wrote that there are no second acts in American lives, a sentiment that he may or may not have actually agreed with, but one which has certainly lived on in the popular imagination if only for the purpose of using it whenever someone proves the axiom wrong. Whether it’s a politician who fell from grace for having improper relations with a staffer in a Burger King bathroom and is now running again for office or an athlete returning to the field after being suspended a season for injecting himself with a cocktail of performance enhancing chemicals, the quote is always brought up when discussing a second act on the upswing. There is nothing the American people like more than being the arbiter of a celebrity’s fitness to re-enter the public forum, to be able to absolve the rich and the famous for their misdeeds and take their rightful place as the better man or woman in an imagined relationship, their personal integrity sitting in their back pocket as a trump card if they should relapse and shuffle off their newly won good graces for a return to sin.

If you have wealth, connections and the capacity to be desirable, there is no limit to the number of acts your American life can have. However, if you’re born into poverty and blight, there’s a pretty good chance you won’t even get a first act. In Detroit, the metaphorical theater you would have performed in was probably bulldozed back in the 70s to make way for an 8-lane interstate highway or set ablaze on Devils Night, the holiday on Halloween Eve where arson-enthusiasts from Detroit and the surrounding area come together to torch abandoned buildings. According to a US Census survey conducted from 2008 to 2013, 38.1% of all Detroit residents were living below the federal poverty level, a fairly arbitrary cutoff point used by government organizations to determine which citizens are broke enough to warrant certain benefits. In 2013, the federal poverty level for a family of four was $23,550, a number I imagine the Department of Health and Human Services came up with using a game of Yahtzee and about half a kilo of Moroccan Hash that they took from the DEA’s rainy-day supply because only a profoundly drug-addled brain would think that a family of four living on $24,000 a year should be classified as living above the poverty line.

Despite these absurdly low poverty thresholds, the numbers coming out of Detroit are stunning, especially in relation to the rest of America.From 2008 to 2012, about 10.9% of families in the United States were living below the poverty level. In Detroit, over the same period of time, that number was 33%. Put another way, a family living in Detroit is 3 times as likely to be living in poverty as another family picked at random from the entire United States. Of course not everyone in the Greater Detroit area is struggling. Head a dozen or so miles north to the predominantly white confines of Oakland County(1) and you’ll find most families living quite comfortably with a median family income of over $84,186 and only 7.2% of families living in poverty. As it turns out, there was a renaissance in Detroit over the past few decades, and it took place tens of miles away from The Renaissance Center in the suburbs. As it turns out, white-skinned European immigrants are more than welcome to come into the melting pot, but black folks aren’t.

Like Loading...
‹ A Heads Up Play: Chris Borland’s Early Retirement & What It Means For The Future of Football
Mountaineers Are Seldom Free: Union-Busting in the West Virginia Mine Wars ›