Home › History › But The Hate Remains The Same: Reconstruction & A Changing Of The Guard in Southern Politics

But The Hate Remains The Same: Reconstruction & A Changing Of The Guard in Southern Politics

History is not a linear thing. It is not neat, nor is it ramrod straight. It’s beginning is theoretical; its end, unknowable. History—like the rotation of the earth, the orbit of the moon and the life, death and rebirth of everything in the organic world—is cyclical, every movement and countermovement nothing more than a variation on previously expounded upon themes that adapts to the times in which it finds itself. Incapable of fully remembering the past and retaining the lessons learned from it, humanity relegates itself to an infinitely repeatable history where progress has a nasty habit of doubling back over on itself. This is how we find ourselves living in a world where Israel memorializes the victims of the Holocaust byconfining the Palestinian people to ever-shrinking and war-torn ghettos, while the descendents of the Germans who carried out the Holocaust are launching massive “anti-Islamisation” protests all across the country. This is how we wind up celebrating the 50th anniversary of the Voting Rights Act by simply trying to keep it from being destroyed.

With the nature of the 24-hour news cycle and the proliferation of punditry disguised as journalism, it has become difficult for Americans to conceive of the nation’s political landscape as being anything other than the polarized, regionally defined mess that it is today.  However, the truth of the matter is that the bifurcated, ideological rigidity that pervades much of the United States is a recent development. For instance, the American South—a region that has become the most aggressively pro-GOP part of the country—has actually been the province of the Democratic Party far longer than their Republican rivals. From Ulysses S. Grant’s emphatic defeat of Horace Greeley in 1872 until Barry Goldwater’s limited victories in 1964, the Republican party failed to carry a plurality of deep south states in a single Presidential election. That’s 92 straight years that the Democratic Party dominated down in Dixie, more than two times the length of the current Republican streak in the old Confederacy(1). Whether we’re at the beginning, middle or end of the present cycle of Republican control is the subject of conjecture and speculation. That an end to their reign will eventually come is incontrovertible, and in order to understand what that end might look like, we must look back to the past.

This Republican campaign poster shows the candidates for President in 1872 surrounded by their “proper company.” Republican Ulysses S. Grant is flanked by Washington & Lincoln while Democrat Horace Greeley is lumped in with Jefferson Davis and John Calhoun.

The election of 1872 would prove to be the beginning of the end concerning America’s initial test-run with black suffrage. The Civil War was 7 years gone by then and the Federal occupation of the South was incurring more and more resistance from ex-Confederates chomping at the bit to restore the white supremacist law and order that they were so accustomed to. Black southerners were still being elected to local, state and Federal offices at the time, but the protections around them (and the 15th Amendment) were beginning to crumble. Slowly but surely, Republican governments in the deep south began to flip Democratic against a backdrop of institutionalized violence and lynching by the Ku Klux Klan and ordinary white citizens. By the time the 1876 election rolled around, every state in the old Confederacy save South Carolina had installed Democratic governments, and with them, the first wave of laws aiming to eliminate black suffrage and enforce a regime of slavery by another name. However, the greatest blows to black suffrage wouldn’t come from the corridors of old Confederate capitol buildings and courthouses, but from the smoke-filled rooms of Washington, where the Supreme Court would set up the pins of injustice for the party elites to knockdown.

In 1876, the United States Supreme Court provided their decision in United States v. Cruikshank, one of the first cases (along with The Slaughterhouse Cases and Bradwell v. Illinois) that forced the nation’s highest court to explicitly deal with the 14th amendment. The issues in Cruikshank centered around the Colfax Massacre—or the “Colfax Riot” as it is known to white revisionist historians—wherein at least 100 black (and 3 white) Louisianans were murdered after a white paramilitary group with the ingenious sobriquet of the White League attempted a violent coup of the recently installed, biracial Republican government. The bulk of the black men who lost their lives in the massacre did so after the “battle” had ended and white flags of surrender were raised, with white paramilitary members shooting them down in cold blood. Many black men were killed as they were fleeing from the church. Even more met their end after they had been taken prisoner and their good ole boy captors had gotten liquored up. Regardless, Federal troops were soon sent in by President Grant to reinstall the Republican government and protect what was left of Colfax’s black citizenry. 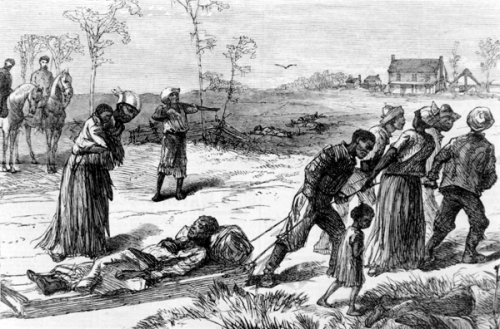 After initially indicting 97 white men for their roles in the massacre, 9 were charged, not with murder, but with violating a section of the Enforcement Act of 1870 that prohibits individuals from conspiring together to withhold from another citizen any rights guaranteed to him under the Constitution or Federal law. Of the 9 that were charged, only 3 would be convicted and see their cases tried before the Supreme Court where—in one of the worst decisions in the history of the American judiciary—all 3 would have their convictions reversed. In writing the majority opinion of the court, Chief Justice Morrison Waite stated that all Americans were citizens of both the United States and the state in which they lived, with each government being responsible for a distinctly different set of rights. Using this rationale, the court ruled that it was not within the purview of the Federal government to enforce laws against private parties—such as murderous, racist paramilitary groups like the White League—and that they could only prosecute “state action”, while the individual states were left to mete out justice regarding private actions.

Having more or less handed over the duties of enforcing civil rights legislation to the states themselves in Cruikshank, the Supreme Court unofficially rendered the 14th and 15th amendments moot in any state that didn’t feel like enforcing them. Unsurprisingly, the election of 1876 was characterized by unprecedented levels of racially-motivated voter fraud, with white Democrats in the South threatening blacks with violence if they dared to vote andpulling tricks like ballot-stuffing and placing the silhouette of Abraham Lincoln—symbol of the Republican party—next to Democratic candidates names to fool illiterate blacks into mis-voting. Through a mixture of corruption, intimidation and outright violence, Democrat Samuel Tilden won a plurality of states in the deep south in the election of 1876, but—in the closest presidential election in our nation’s history and the only one to have the losing candidate garner over 50% of the popular vote—Tilden ceded the presidency to Republican Rutherford B. Hayes in exchange for removal of all remaining Federal troops from the south.

All in all, the Compromise of 1877—as the deal would come to be known—was a tremendous success for white supremacist Democrats in the South and an unmitigated failure for Republicans, blacks and civil rights advocates. In exchange for giving up a single term in The White House to a man whose most significant action in office was sending in Federal troops to help break up The Great Railroad Strike of 1877, the Democratic party had put the final nail into the coffin of Reconstruction, ushering in the era of Jim Crow and winning control of everything below the Mason-Dixon Line for almost a century. In 1964, the political tides began to turn in the South. Blue seas turned to red as Goldwater and his conservative acolytes spread their discriminatory message throughout Dixie, while President Johnson, a true, blue son of Texas, signed away southern loyalties with civil rights legislation that undid the damage his party had done 4 score and 7 years prior. One historical rotation ends. Another one begins.

(1) It was less than 40 years ago that Jimmy Carter handily carried the South against Gerald Ford, winning 10 of the 11 states that had formed the Confederacy (Virginia narrowly went for Ford).