Home › Social Justice › Race › The Whiteness of My Discontent: How Privilege Affects The Way I Protest

The Whiteness of My Discontent: How Privilege Affects The Way I Protest

My whiteness speaks volumes, but I cannot hear them. It tells the world around me that my life matters—that the shedding of my blood and cracking of my bones will bring with it consequences denied to darker-skinned men. In my oaten hue lies the scales of my nation’s justice, blurry-eyed and peering out from beneath the oxidized folds of its blindfold to protect me. My whiteness is its own lawyer. One which does not cross-examine or close, but which whispers of its own accord to those who share my whiteness a few soft words – it could have been you – that make all the difference. My whiteness reflects back at me wherever I go. From the halls of Congress to the billboards lining the highway, my whiteness is affirmed and encouraged. Quietly, it reminds me that this country was made for me. That when the founders said all men they meant white men. White men with property gained through a genocide of smallpox blankets and musket balls, borne on the lash-ridged backs of Africans made American against their will and without their freedom.

In my whiteness lives 400 years of memories. Suppressed, ready to be sloughed aside and reasoned away as the products of a different place and a different time that does not belong to me as I know it does. Clinging onto the peculiarities of my family’s history, my whiteness tries to absolve itself of guilt—claiming innocence behind the veil of immigrant’s songs and a Yankee background. My family never had slaves…it assures me, as if that means something. As if, by dint of the lottery of my birth I can separate myself, my hands unsoiled by the blood of racial hatred and iniquity. The wealth that was piled from the bondsman’s 250 years of unrequited toil did not quarantine itself in the south, nor did it confine itself to the coffers of the children of slaveowners and Confederate soldiers. It circulates amongst all of us and the wealth I inherit will be no different that the wealth inherited by a white child of Dixie. There is no geography to the hate and fear of my whiteness. 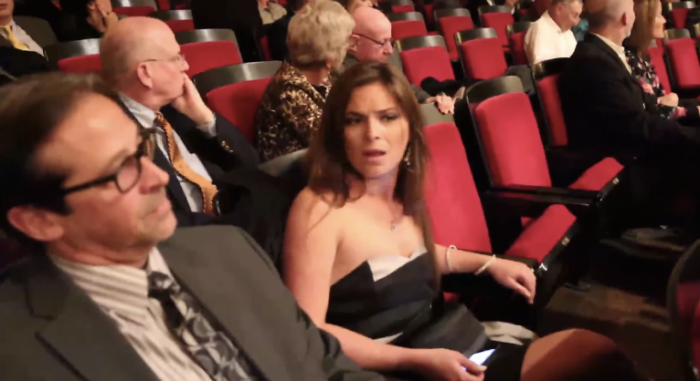 A concertgoer at the St Louis Symphony expresses her displeasure with a flash mob of protestors singing a “Requiem For Mike Brown” Photo Credit: Rebecca Rivas/The St Louis American

New York City—St. Louis—Cleveland—San Francisco—these cosmopolitan hubs of the north are spilling innocent black blood just as much today, if not more, than their southern counterparts. The racism of the north grows from the same tree as that of the south. They grow as burls, not branches—lumpen deformities that gain life from roots soaked in the blood of that strange fruit that hangs from Poplar trees and rests face down for hours in the hot August sun. All around the tree stand the sentinels of my whiteness—little stormtroopers for the status quo sweating underneath gas masks and body armor, filling up with animus and rage. They may shoot rubber bullets and gas canisters at me and the mixed crowd of protestors about me, but they do so in the service of my whiteness. They do so without my consent because my whiteness is not just my whiteness, but all whiteness. It incapsulates every one of us, from Klan members and Afrikaner nationalists to Unitarian ministers and community organizers. Strain your ears and you might be able to hear the crackling voices of the few calling for justice and equality, but it will only be as a murmur drowned out by the many’s din of brawling hate and depraved indifference that has saturated whiteness for centuries.

What shall I do about my whiteness? I cannot give it back, nor can I hide behind it. I cannot let it be my shield or my crutch or my emergency chute from the struggle. It must be with me always. It must be with me not in pride or in fear, but in understanding. I cannot be of service to my black and brown brothers and sisters if I feign ignorance of my privilege and my past because it is precisely that privilege and past that we are fighting against. The privilege of my whiteness is a part of me, but it does not define me, just as the incessant discrimination faced by those in the black community does not define them. My role is not to smother this privilege, but to expose it to the naked light of day and to force more racially moderate white men and women to confront it in themselves. I can raise my hands up and scream, “don’t shoot” and I can go to die-ins and help shut shit down, but my true worth comes in those un-extraordinary everyday moments away from the front lines when someone I know tells me black folks need to get over it or says that the Mike Browns of the world would still be alive if they hadn’t done something wrong, because it is in those moments that I can hoist a mirror up to their face and make them see how wretched their hate and ignorance looks in their eyes.

This is not my movement. I am simply blessed to be a part of it. I am an ally—someone who is there to lend support and passion, not guidance and direction, to a fight that isn’t about the equitable distribution of wealth or upcoming elections, but about the worth and protection of black life in America. The hashtag is not #AllLivesMatter, because we don’t need to hold rallies and block off highways to stop the wanton murder of young white men by law enforcement. It is #BlackLivesMatter, because once every twenty-eight hours, we as a nation are reminded of how little value our nation’s police officers place on black and brown life. My whiteness does not need a hashtag or a movement. The state-sanctioned destruction of black life does and I must support it as best I can.

Like Loading...
‹ Other Voices, Other Towns: Conversations With Complete Strangers
The Wall Street Woodcutter & The Trees: A Look At The Passage of the Cromnibus Bill ›