Home › Social Justice › Race › The Men in the Plastic Masks: How Anonymous Complicates Protests in Ferguson

The Men in the Plastic Masks: How Anonymous Complicates Protests in Ferguson

A movement without organization is little more than a ship without a rudder. Take an idea—any idea, no matter how noble or just—and let it loose upon the world in great numbers without anyone to guide it and it won’t be long until that idea veers off course and devolves into a chaos that will either bury or bowdlerize it. In order to effect social change, your actions cannot be spontaneous and reckless. There must be method to your cause’s madness or else it will be picked apart by both the existing power structure and the pockets of self seeking “activists” looking to exploit public suffering for personal gain. Rosa Parks did not simply step onto a bus in Montgomery, Alabama and decide that she was going to challenge Jim Crow by refusing to sit in the back. No, Rosa Parks’s action was the culmination of years of planning and struggle by black advocacy groups like the Women’s Political Council to desegregate the city’s buses and it came 9 months after a 15-year old girl named Claudette Colvin was jailed for acting in spontaneous defiance and refusing to move to the back of the bus for a white person. Most of us only know of Rosa Parks’s act of civil disobedience because Dr. King and the NAACP decided that they needed an impeccable representative for the movement—someone who was older and well-respected in the black community—and Colvin simply did not fit the bill. Parks was chosen to be face of the Montgomery Bus Boycotts because it was agreed upon by the leaders of the Civil Rights Movement that she gave them the best shot at achieving their goals.

After a few days and nights in and around Ferguson, it has become clear to me that the same sort of organization that characterized the Civil Rights Movement and Black Power movement in America or the Black Consciousness Movement in South Africa is not here. That is not to say that there aren’t extraordinary people fighting day and night for permanent, transformative change in their communities—because there are—but rather that the leadership and organization of groups in Ferguson is much more fragmented. For instance, last night I was over on the campus of Harris Stowe State, the region’s only Historically Black University, for a peace rally being put on by the Young Citizens Council of St. Louis when I received a text at 6:30 pm saying that there was going to be candlelight vigil for Mike Brown outside of the Ferguson Police Department in 90 minutes. This presented me a bit of a problem as the Ferguson PD was almost half an hour away from Harris Stowe and the peace rally hadn’t even started yet, it would be impossible for someone to attend both events in their entirety.

Weighing my options and looking around at the sparse attendance at Harris Stowe, I decided to leave the Peace Rally early and drive over to Ferguson for the candlelight vigil. Encouragingly enough, the vigil went along pretty well. At a little after 8 o’ clock, roughly 75 of us took our lit candles out into the middle of South Florissant Road and held them aloft as we tried to observe 4.5 minutes of silence, in homage to the 4.5 hours that Ferguson Police let Mike Brown’s body lie in the road after he had been killed by Officer Darren Wilson. Complete silence wasn’t really achieved as there were a few people on the fringes of the vigil that were conversing or, in one man’s case, screaming at the top of his lungs for no reason whatsoever, but all-in-all it could be considered a success. The problems only really began happening once the vigil was over and all plans for concrete action had been exhausted.

It was at this point that the fractious nature of the Ferguson protest movement, at least on this night, made itself apparent. One group of people of people ended up leaving the area and heading over to the Canfield Green Apartment Complex where Brown was shot to hold a rally away from the prying eyes of the media, while another group began marching up and down S. Florissant, eventually posting up in front of the police station and obstructing traffic with no real rhyme or reason to their actions. A third group, of which I was a part, just sort of stood on the sidewalk in the freezing rain, looking out at the shenanigans in front of us and swapping stories while we waited for something to happen. 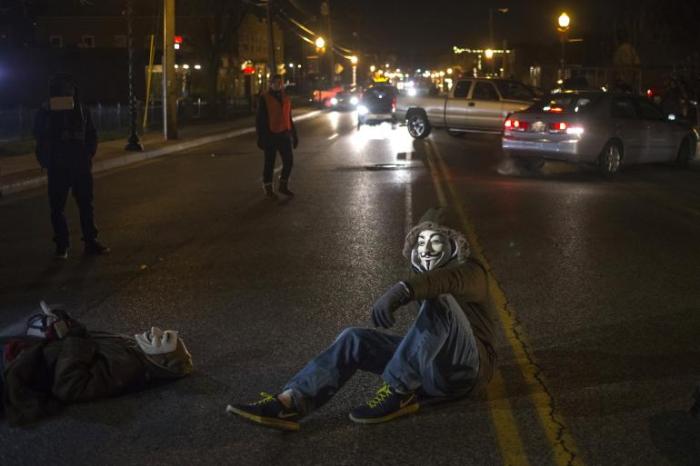 Of the protestors who were hellbent on bringing all traffic outside the police station to a standstill, a good number of them had on those creepy, cream colored Guy Fawkes masks that have become the international symbol of association with the group Anonymous. For those who aren’t familiar with the group, Anonymous is a leaderless collective of “hacktivists”  that is essentially the personification of the internet. Started in 2003 on the imageboard site 4chan, Anonymous was originally only about getting “lulz”, a term that’s essentially shorthand for pranking someone. In 2008, they began to wage war on the Church of Scientology after they tried to take down a now infamous video of Tom Cruise acting like a delusional banshee at an International Association of Scientologists awards show.

Scientology’s principle crime, in this instance, was having the audacity to interfere with the group’s lulz, but over time the conflict morphed into something greater and led Anonymous to take on the more overtly political stances with which it is now commonly associated. In the past several years, Anonymous and its legion of hackers have taken on PayPal for refusing to accept donations for Wikileaks, supported the Arab Spring and Occupy movements in America and abroad, and gone after high profile criminal justice cases like the rape of a young woman by local high school football players in the town of Steubenville, Ohio. Most recently, they have been lauded by many for exposing white supremacist members of the Ku Klux Klan who have been actively supporting Darren Wilson.

Now, I am not terribly familiar with hacking culture and cannot offer much in the way of a substantive opinion on the relative merits of Anonymous’s online activities. However, I am an activist and a writer who has participated in and written about enough protests and social movements to permit myself to say my piece with regards to Anonymous’s physical presence in Ferguson while keeping a clear conscience. To this end, I feel it necessary to express my concern that Anonymous will do far more more harm than good when the grand jury’s decision is released in the coming days and to ask any Anons who are reading this to exercise caution and restraint should they come to Ferguson.

With no clear leadership on the ground, the protest movement in Ferguson is at great risk of being driven off course by individuals and groups who do not have the movement’s best interest at stake. Anonymous, by their very nature, is first and foremost among these groups because they are a completely decentralized outside force. While I’m sure there are members of Anonymous who live in the Greater St Louis Area, the vast majority of Anons do not live there and thus have little emotional investment in building coalitions that will work through nonviolent means to improve the health, wealth and well-being of the black community in places like Ferguson. Last night, as I stood on the sidewalk watching several young men in Guy Fawkes masks wander aimlessly into traffic and do the Macarena on the double yellow line of S. Florissant, I was struck by the realization that there was a decent chance someone like them would light the fuse that sent Ferguson spiraling out of control.

My one plea to any members of Anonymous who show up for the protests and rallies in Ferguson and all across St. Louis County would be this: take off your masks. On the internet and the realm of hacking I’m sure there are a million reasons why keeping your anonymity is crucial, but in our physical world, wearing those masks serve only to distance you from your humanity. Much like the safety of anonymity emboldens people to unleash torrents of hate speech in the comments section of online articles and on Twitter, those masks enable us to feel above reproach and apart from our fellows. To see someone is to know someone and when I look at a protestor in their full Anonymous get-up, all I see is a cipher. I cannot build community with someone when I don’t know their face or their name and I can’t trust someone who doesn’t trust the world enough to let it know who they are. I never know what to expect from a member of Anonymous and perhaps that’s the point, but I’d at the very least like to know unequivocally that they are on our side—that they don’t think this is a game. I guess we’ll find out soon.

Like Loading...
‹ Country Club Problems: The Dangers of Driving While Black In St Louis County
When Hope Is Engulfed In Flames: Ferguson On The Night of The Darren Wilson Grand Jury Decision ›