Home › Film & Event News › No Justice, No Peace…But We Do Have Photos: The Turn on the Water Detroit Rally

No Justice, No Peace…But We Do Have Photos: The Turn on the Water Detroit Rally

Today, I made the drive up I-75 from Cincinnati to the Motor City to attend the March & Rally to Turn the Water On in Detroit, which was put on by National Nurses United, Robin Hood Tax USA, Moratorium-MI.Org and a host of other great progressive organizations. I will have an article up that touches on the rally and Detroit’s Water Crisis in greater detail in the next couple of days, but I just wanted to post some of the photos that I took during the march as an appetizer and briefly say how thoroughly impressed and emboldened I was by the people of Detroit and the people of Michigan who I saw out in huge numbers today. While some of the crowd could be attributed to folks taking a break from the Netroots Nation convention going on right now at the Cobo Center, I would say that probably 3 out of every 4 people I talked to at the march was from Detroit or Ann Arbor or Flint or anywhere in the great state of Michigan, which is a testament to how passionate and broad the grassroots movement for social change is there. I hope you enjoy the photos.

Like I said, this was a big honkin’ rally.

You might not be able to tell, but the salt and pepper profile in the middle there belongs to Mark Ruffalo, who made some very brief remarks at the rally, saying that he was only there because cameras seem to follow him places. Thank you for all of your support Mark, and I officially forgive you for starring in Just Like Heaven.

A friendly reminder to Emergency Manager Orr and Governor Snyder: The People of Detroit own the water in this city, not some undemocratically appointed corporate stooge.

Couldn’t have said it better myself.

Where there’s a big protest, there’s a police presence to match.

Who doesn’t love a reverend with a tambourine?

Watch out for them Ragin’ Grannies. 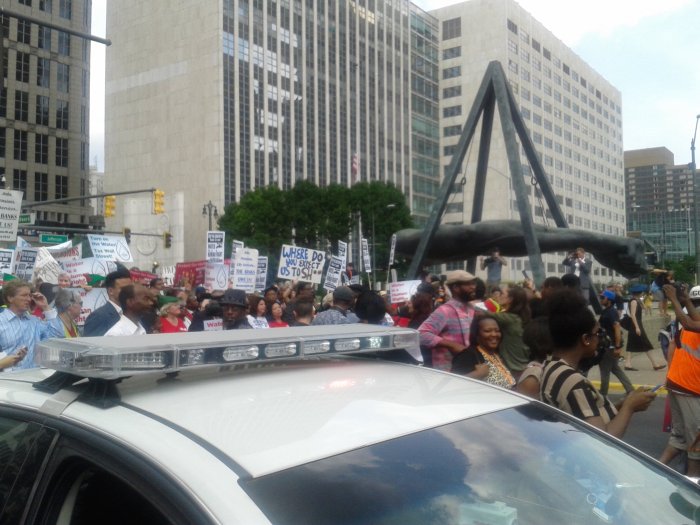 Like Loading...
‹ Fractured Communities: How Fracking Is Widening The Gap Between The Haves & Have-Nots in Rural Ohio
Let Them Drink Pop: Detroit’s Water Crisis & The Fight For Basic Human Rights in The Motor City ›