As a sports columnist for The Cincinnati Enquirer, you are entitled to publish a wide array of opinions concerning St. Louis Rams and University of Missouri defensive end Michael Sam. For instance, it would be perfectly reasonable for you to express the belief that last year’s SEC co-Defensive Player of the Year was drafted in the 7th round of this year’s NFL Draft, just 7 spots from the bottom and the ignominious distinction of being labeled “Mr. Irrelevant”, because his game projects very poorly to the professional level. At 6′ 2” and 261 lbs, Sam is caught in the no-mans-land of the NFL “tweener,” a designation reserved for those players who are too small to play defensive end, yet lack the quickness and maneuverability required of a linebacker. Considering his pedestrian scores at the NFL scouting combine and lackluster performance at the Senior Bowl, the argument can be made that Sam simply doesn’t have the physical tools to excel in the NFL like he did at Mizzou. Those are all sound criticisms that are bolstered by empirical facts and the opinions of men and women who know far more about football than I do, and they would have made for an informative and interesting column. 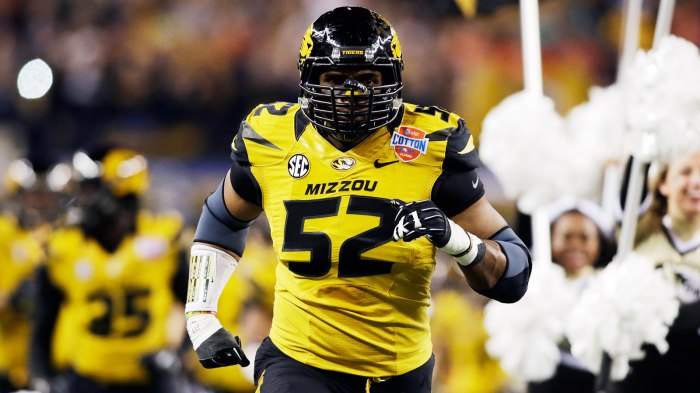 Michael Sam, running onto the field before his last game at the University of Missouri

Your article concerning Michael Sam in this Monday’s edition of The Cincinnati Enquirer, titled “Dolphins/Don Jones Exemplify Troubling Trend”, was interesting and informative as well, but perhaps not for the reasons you intended. It was interesting that The Enquirer would publish an article in which one of it’s employees defends the right of multi-billion dollar enterprises and sports team owners to discriminate against American Indians (Washington Redskins owner Daniel Snyder), African Americans (LA Clippers owner Donald Sterling) and women (Augusta National Golf Club), and it was informative in the sense that you have made clear in a very public forum that you should stick to writing about what happens inside places like Paul Brown Stadium and not outside of them.

In your editorial, you take umbrage with the way in which the Miami Dolphins handled the extracurricular activities of their employee, defensive back Don Jones, who felt it incumbent upon himself to tweet out “omg” and “horrible” when ESPN broadcast Michael Sam’s reaction to being drafted that included a kiss between Sam and his boyfriend. In response to these actions, the Dolphins—who are still trying to shed the ill-repute that came with the revelation that guard Richie Incognito and several other Dolphins had routinely subjected their teammate Jonathan Martin to homophobic slurs, “inappropriate physical touching,” lewd sexual remarks about his sister and a plethora of racist epithets—decided to fine Jones and mandate that he go to sensitivity training before he was allowed back onto the team. It was at this point in your article that you remarked, without even the slightest hint of irony, “Do you punish Jones for what he tweeted? To the extent the Dolphins have? I mean, sensitivity training?”

Yes, Paul Daugherty, sensitivity training. As in the place an employee is sent by his or her employer after he or she makes offensive or culturally insensitive remarks at the workplace or, in this case on Twitter. The last time I checked, broadcasting to the entire world your contempt and disgust for a display of affection between two gay men qualifies as being insensitive. Of course, the argument you put forth in your piece is that these remarks are not insensitive or, at the very least, are insensitive, but widespread enough to prohibit censure. “Jones isn’t a radical,” you tell us. “Lots of people think the way Don Jones does. Do they all need to be re-educated too?” Yes, Paul Daugherty. Yes they do. Just because a large mass of people hold a common belief does not mean that that belief is societally acceptable. In the not so distant past, lots of people thought it was “horrible” for a black man to be in a loving relationship with a white woman. The soil underneath thousands of trees in our nation is still stained with the blood of the strange fruit that hanged from it because for centuries we as a nation tolerated and encouraged the belief that interracial marriage was unacceptable. Some Americans still cling to this hateful belief, but after more than a century of bloodshed, heartache and hard-won legislative victories, they are but a small minority. We have yet to reach this level of societal acceptance with the civil rights of LGBT Americans, but we are on our way.

In your article, you accuse those of us who are defending Micheal Sam of being selectively tolerant, charging that we hold true to the creed that says, “I will tolerate your point of view, as long as it’s in line with mine.” By this reasoning it is in fact we, the supposed champions of acceptance, who are being closed-minded in not tolerating the views of our opposition. The only problem, Mr. Daugherty, is that your sentiment is little more than petulant sophistry from someone who is either unwilling or incapable of acknowledging the existence of prejudice against the LGBT community. You say that Jones didn’t yell fire in a crowded theater, but he did. His ignorant and hateful views are but one part of the vast mosaic of gay, lesbian and transgender discrimination in this country that causes LGBT youth to attempt suicide 4 times as often as their straight peers. It is the Don Jones’s of our nation who perpetuate a culture in which gay men are 3 times as likely to report hate violence to the police than their straight counterparts, and it is columnists like yourself who give that culture the air it needs to breathe.

Like Loading...
‹ Krispy Kremes & Strip Clubs: A Trip To The Id of America
The Family Afterward: West Virginia Four Months After The Freedom Industries Chemical Spill ›