Home › Corrections/Prison News › Watching As He Wastes Away: How a Kentucky Prison Let a Mentally Ill Man Starve to Death

Watching As He Wastes Away: How a Kentucky Prison Let a Mentally Ill Man Starve to Death

As I type this, a delectable, carbohydrate filled pretzel bagel from Servatti’s is busy baking in the convection oven of my favorite coffee shop. Within the next minute or so that bagel will be brought out to my table and I will promptly devour it, at which point the golden brown pretzely bits of bagel will be digested, broken down into glucose, and absorbed into my bloodstream to provide my body with the fuel it needs to function. Whatever unused glucose I gleaned from my now ex-bagel will then be converted into glycogen and stored in my liver and muscles or turned into fat to be drawn on in the event that I get distracted writing this article and forget to eat for 7 or 8 hours. Should that 7 or 8 hours somehow turn into 70 or 80 hours, my body will be forced to switch from glucose to a fat-derived product for cellular metabolism when my glycogen storages inevitably dry up. At this point my body will also begin culling glycogen from muscles (including the heart) to facilitate brain functioning.

If my fasting is allowed to continue for a few more weeks, my muscles will begin wasting away and most of my organs will start atrophying. According to the scientific literature on hunger strikes, I’ll likely shuffle off my mortal coil after anywhere between 45 and 73 days (mean survival date = 62 days) of starvation, although it’s a safe bet that I will fall on the shorter end of that spectrum as I’m of relatively slight build and don’t have a surfeit of fat or muscle stores to keep me going for long. My death will probably be the result of a vast constellation of maladies effecting a large cross section of organs and bodily functions including, but not limited to, cerebral edema (swelling), cardiac dysfunction, a distended and bile-filled gallbladder, swelling of the small intestine, sepsis, and pneumonia. In short, my body will eat itself alive.

One does not need to be a physician or registered nurse to diagnose someone who is suffering from that sort of acute malnutrition, regardless of whether or not it’s the result of starvation or disease. When I interned as a case manager in an HIV Clinic in Baltimore, I had occasion to see several people whose bodies had been whittled down by years of HIV-associated Wasting to the point that I could’ve encircled their upper arm with my hand. With their sunken cheeks and concave stomachs, they seemed so brittle that a stiff wind might knock them to the ground and shatter their bones to rubble. I looked upon these men and women and felt that special sort of pity that one gets when coming face to face with people who have suffered in ways that are unimaginable to those who have not shared in their experience. Even if I was blind and knew these people only by shaking their hands and touching their faces, their suffering would be communicated to me as soon as I had met them. These were deeply sick people and to pretend otherwise or to ignore their plight would require a total disregard for their lives that is almost incomprehensible.

Sadly, the callous dismissal of the suffering of others is the modus operendi for many of America’s federal and state prisons, even amongst those who have sworn an oath to do no harm to those to whom they minister. As the Associated Press first reported earlier today, an inmate at the Kentucky Department of Corrections maximum-security facility in Eddyville managed to commit suicide this past January by starving himself to death under the watchful eye of the prison’s doctors and guards. The inmate, 57-year old James Kenneth Embry, had 3 years left on a 9 year sentence for as-yet undisclosed drug offenses when he began refusing food in early December. For 5 weeks after that, Embry did not eat a single meal, refusing 32 of the 33 trays offered to him by the prison and leaving the lone tray he did accept untouched. 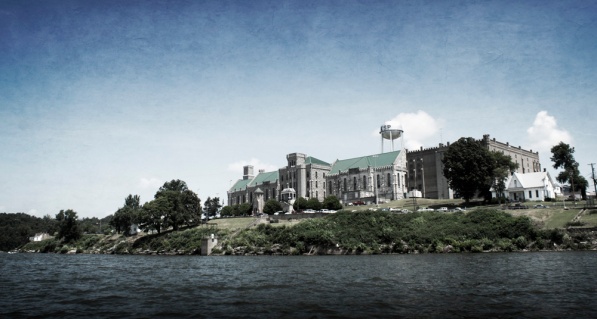 A look at the Kentucky State Penitentiary in Eddyville, KY

As would be expected, Embry began shedding weight rapidly, dropping 32 lbs—roughly 19% of his body weight—from his his 6 foot frame in just 10 days. The prison’s physician, Dr. Steve Hiland, was apparently not phased by Embry’s severe weight loss as he signed off on the inmate’s report without actually visiting him. Soon thereafter, prison officials responded to the news of Embry’s condiition by taking him off of their hunger strike watch list for six days because of the fact that he drank some tea. On January 13th, just two days after being reinstated to hunger strike watch, registered nurse Bruce Bauer realized what dire straits Embry was in and authorized a transfer from his cell to the prison infirmary only to have an advanced practice registered nurse, Bob Wilkinson, override the authorization and take Embry back off of hunger strike watch. A little more than 5 hours later, Embry was found slumped over and unresponsive in his cell by a corrections officer and within half an hour he was dead.

The AP and other media outlets are reporting that James Kenneth Embry’s death was the result of a hunger strike, but I would respectfully disagree. It may seem like semantics, but a true “hunger strike” is an act of protest by an individual or a group of individuals in the service of some larger goal or cause. Hunger strikes, by definition, must be carried out by mentally competent prisoners who realize the ramifications of their actions and don’t have suicide as an end goal. The recent events in the California state prison system where thousands of inmates refused to eat their meals over a 2 month period in protest of the state’s draconian solitary confinement policies, is a great example of a hunger strike, as is the fasting of detainees in Guantanamo Bay. Embry’s refusal to eat for five weeks, on the other hand, had no external motivation and even a cursory look at his psychological well-being over the past year shows that he was not mentally competent.

Less than a week before he began starving himself, Embry met with Kentucky State Prison’s psychologist, Dr. Jean Hinkebein and told her that he had been feeling anxious and paranoid and that he wished to go back on some anti-anxiety medications that he had gone off of seven months earlier. Dr. Hinkebein flatly refused to place Embry on his old medication and claimed that her patient didn’t have any significant mental health issues, despite the fact that he expressed a desire to hurt himself. A week later, when he was moved to an observation cell in the prison, Embry once again verbalized ideations of self-harm, telling Dr. Hinkebein, “I have nothing left to live for.” Hinkebein shrugged off these comments as being too vague to warrant action and, even after Embry tried to carve himself up with a plastic utensil, nothing was done to help him. 10 days later, Embry threatened to hurt himself again and subsequently followed through on his threat by banging his head repeatedly into the door of his cell, causing prison staff to place him in a restraint chair. When asked why he was banging his head into the cell door by Dr. Hinkebein, Embry told her that, “I felt like hurting myself, so I banged my head.”

In the wake of Embry’s death, the Kentucky Department of Corrections has fired Dr. Hiland—who had been making $164,554 as the prison’s physician—and has placed Dr. Hinkebein on administrative leave, stating a desire to fire her in the near future. Hiland and Hinkebein, both of whom ran private practices in addition to their “work” at Kentucky State Pentitentiary, are unlikely to lose their licenses as correctional medical malpractice is usually the rule rather than the exception. Just last month, the Associated Press broke the story of a 56-year old mentally ill veteran James Murdough, who quite literally baked to death inside the stifling heat of his Riker’s Island cell. These are not isolated incidents. Rather, they are the expected result of a prison-industrial complex that views the men and women who walk through their doors more like cattle than people. If their actions are any indication, the medical staff at the Kentucky State Penitentiary saw James Kenneth Embry as little more than window dressing to a paycheck. With the exception one registered nurse, the actions of the men and women working in the prison suggest a complete and utter disregard for the life of another human being and there is little to suggest that their attitudes were any different anyone else under their watch. If Dostoevsky had it right and a society’s degree of civilization truly can be judged by entering its prisons, it would be hard not to conclude that our society is anything less than barbaric.

Like Loading...
‹ “Because The Money’s Too Damn Good to Leave” : A Look Inside North Dakota’s Oil Boom
Following in Potentially Vanishing Footsteps: A Latina’s Journey From LA to an Ivy & Back Again ›