A brief note before we get into content from my book, Bread From The Sweat of Other Men’s Faces:

It has been brought to my attention by several readers that it might be helpful to provide a little background info on the book itself and how I went about writing it so that folks aren’t just thrown into the middle of something with no context, so I’ve put together a few basic notes and facts that should help when reading the excerpts I post on this site: 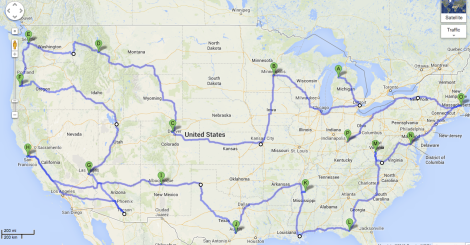 A general outline of the course I ended up taking on my 39-day trip this summer.

Hopefully, that has helped you gain some idea of what my book is all about and will allow you to read the little bits and pieces I post online with more clarity and enjoyment. The excerpt you are about to read comes from a chapter that was built around my visit to The George W Bush Library and Museum in Dallas, TX:

As he was able to during his 8 years in office, George W. Bush and the library that bears his name managed to make me simultaneously furious, despondent and exhausted within a few minutes of my arrival. As opposed LBJ’s Presidential Library, which was located on Texas’s flagship public university, the Bush Library was built on the campus of the Lone Star state’s priciest private school, Southern Methodist University. SMU, which is also referred to as Southern Millionaires University, has long been one of the prime destinations for the young Southern elite and has admission criteria that are part institute of higher education and part country club. When it comes to economic exclusivity, SMU is at the head of the class, clocking in as the the 12th most expensive school in the country based on its net price, a metric which calculates overall cost by taking the fees for tuition, room and board and the like, and subtracting the average grant given out by the university.i At the same time, SMU doesn’t seem too academically discerning considering the fact that they accept more than half of the kids who bother to send in an application.ii It is only fitting that George W. Bush would set up his Presidential Library on the campus of a school that cares more about trust funds than it does transcripts.

Like the private school on whose grounds it stands, the George W. Bush Library and Museum proved to be overpriced and unimpressive. When I arrived at SMU, I was informed by a parking attendant that I would have to pay $7 simply to park their car in one of the museum lots, unless of course I felt like springing for the museum’s valet parking service, in which case I would have to pay $12. The parking garage attendant, a middle-aged white man in beige chinos and an orange reflective vest, must have sensed my dismay at having to shell out so much money just to park my beat-up Toyota Corolla and attempted to cheer me up by exclaiming that the day’s 95 degree heat proved that global warming was a load of horse manure. I was tempted to tell the man about a hundred reasons why the sentiment he just uttered was scientifically invalid until I realized exactly where I was and whose presidential library I was about to visit, at which point I simply smiled, nodded and parked my car.

Fittingly, the architecture of the George W. Bush Center is a mixture of the restrained, genteel Colonial Georgian style that was popularized around the time of our nation’s founding and the sort of blunt power and starkness seen in the architecture of Nazi Germany. When I walked into the main courtyard at the entrance of the George W Bush Library and Museum, it was as if I had stepped into Albert Speer’s Court of Honor at the New Reich Chancellory in Berlin, but without any of the attendant grandeur and spectacle. It is the sort of building one would expect in a dystopian future born of staid aristocratic ideals and autocratic governance. In a word, Bush’s Library is boring. I’d wager a guess that there’s a 50-50 chance that the library at your alma mater or local college is more aesthetically pleasing than the Bush Presidential Library1.

The first thing I saw upon entering the library was an electronic guest book that was labeled as, and I’m not fucking with you here, the “Freedom Registry.” I decided it would be best to keep my freedom unregistered for the time being and began heading towards the welcome desk when I made eye contact with one of two heavily armed guards who were standing against the wall opposite the entryway. The sight caught me a bit off guard as I hadn’t seen so much as a rent-a-cop at the LBJ Library the day before. Once I had turned a corner and passed the first two guards, I met with a line of my fellow tourists waiting to go through a big TSA-style metal detector, which was flanked by several more guards. At the time, I was unnerved by the sudden onslaught of flak jackets and semi-automatic weaponry, mainly because I had never in all my life been to a museum that made such an inconspicuous display of their paramilitary might. I mean, I’m sure there was a police officer or two patrolling the grounds of the National Portrait Gallery or the Art Institute of Chicago, but I wasn’t greeted at the front entrance by a half dozen of the bastards with their hands resting beside the holstered handguns on their hips.

After being emptied of miscellaneous items and thoroughly x-rayed, I waited in another line to get a chance to purchase my ticket. Once I made my way up to the front, I was informed by the rather prissy young lady behind the counter that I would have to pay $16 to be allowed in the museum2 in addition to the $7 I had paid to park my car. I reluctantly bought a ticket and started making muffled Yosemite Sam grumbling noises to myself while the woman was processing my credit card. Eventually, she gave me my ticket and I went over to stand in a third line to let me into the museum itself. As the line crept along through the large atrium known as “Freedom Hall”, I looked up towards the ceiling and saw that all around me there was a sort of uber-patriotic infomercial playing. Roughly 20 feet in the air was an LED display that stretched along all four walls in a seamless band, showing panoramic views of sweeping mountain vistas and bustling cities alongside a stream of marginally diverse actors playing obscenely happy workers from a variety of fields. As a technological feat, its all very impressive. As a piece of propaganda, it is remarkable only for how hackneyed and vapid every aspect of it is.

1I speak from experience. The library at Denison University—the first undergraduate school that I attended and was politely asked not to return to after my sophomore year—was constructed in the mid 1930s in the Georgian style, replete with a brick and limestone facade that could be airlifted to Dallas and placed on the George W. Bush Center campus without looking at all out of place.

2The pricing structure at the The George W. Bush Presidential Library and Museum was downright hostile to visitors. In addition to the $16 general admission, the museum charged teenagers $14, seniors and non-SMU college students $13, and kids aged 5 to 12 along with retired servicemen and women $10. The only people who are allowed in for free are active members of the military, SMU students and staff, and kids up to the age of 4.

Like Loading...
‹ Sneak Peek of My New Book: Bread From the Sweat of Other Men’s Faces
The 1st Inaugural Mountaineer Bad Beard-Off for Clean Water ›