For The Boston Dead & Wounded

Tonight, amidst the hectic sleuthing bustle congregated outside Brigham & Women’s Hospital and in spite of the semantic weariness of 24 hour media outlets debating the difference between crime and terror, my mind wanders towards two of Boston’s favorite sons—two men who certainly would have known what to make of the carnage today better than I. The first is Robert Gould Shaw, a Colonel for the Union Army during The Civil War and the commanding officer of Massachusetts’ famed 54th Infantry, one of America’s first all-black regiments. Shaw’s time in command was as illustrious as it was brief, with the 25 year old Colonel dying alongside 280 of his men in The Battle of Fort Wagner just outside of Charleston, South Carolina in 1863. In a show of support for his fellow soldiers, Shaw took the unusual yet valiant step of leading his men into battle, a step which quickly led to his death when he was shot through his heart while trying to climb the wall of the fort. After his death, Confederate soldiers decided not to return Shaw’s body with the rest of the white officers, choosing instead to bury him in a mass grave alongside the African American soldiers with which he served. Since then, Shaw has been lionized in New England’s memory, with 3 separate memorials to him or the regiment he led scattered around Boston.

By himself, Shaw would seem to have very little to do with the tragic events that unfolded today on Boylston Street. Aside from their shared affiliation with the city of Boston, a 19th century Civil War officer and the victims of a bombing during a major sporting event have little in common. What links the two is a man who memorialized Colonel Shaw in verse nearly fifty years ago and who may well be Boston’s favorite literary son. In 1964, Robert Lowell marked the 100th anniversary of Robert Gould Shaw’s death by writing a poem, For The Union Dead1, in which he chronicles his own experience walking through the Boston Common and reflecting on the transformations that have occurred between Shaw’s day and the present moment. The poem itself is a typically brilliant and evocative snapshot of America at the height of the Civil Rights Movement, but I want to highlight a section that seems eerily apropos in light of the events of the past 24 hours:

The stone statues of the abstract Union Soldier
grow slimmer and younger each year—
wasp-waisted, they doze over muskets,
and muse through their sideburns.

Shaw’s father wanted no monument
except the ditch,
where his son’s body was thrown
and lost with his “niggers.”

The ditch is nearer.
There are no statues for the last war here;
on Boylston Street, a commercial photograph
showed Hiroshima boiling

over a Mosler Safe, “the Rock of Ages,”
that survived the blast. Space is nearer.

At 2:50pm today, two bombs exploded near the finish line of the Boston Marathon. Authorities are currently reporting that over 130 people have been injured and that 3 people, one of them only 8 years old, have died. President Obama released a statement roughly 3 hours after the attacks occurred, stating that The White House and US intelligence officials were investigating the explosions and that whoever was responsible for them would be carried to justice. Speculation has not been in short supply as a number of news outlets and media personalities have been voicing various theories on the motivation and affiliation of the attacker, with CNN showing a particular disregard for public safety and proper journalism by alerting people that “police were looking for a dark-skinned/black man with black backpack, black sweatshirt and a foreign accent,” so I doubt that my expert opinion on who was behind this atrocity is warranted. What I will provide is something that, at first glance, appears to be coincidence bordering on the unbelievable that lies in Lowell’s poetry and the Boston bombings. 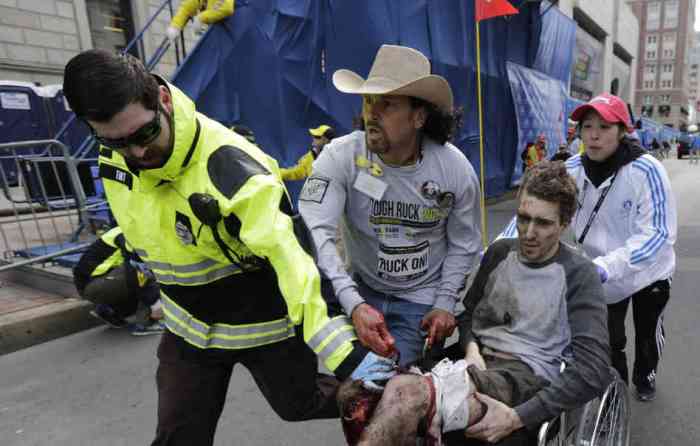 Less than a mile from the finish line of the Boston Marathon, in the heart of Boston Common, is the Robert Gould Shaw Memorial, a bronze sculpture depicting Shaw and the 54th Massachusetts marching down Beacon Street as the left for battle. On the pedestal of the statue is are lines from a poem by James Russell Lowell, great-granduncle to Robert Lowell, describing the nobility of dying for one’s country. It is from this statue that Robert Lowell begins his walk in For The Union Dead, going up Boylston Street where he comes across an ill-conceived ad by Mosler Safes, showing a picture of the mushroom cloud over Hiroshima and boasting of how their safes were so strong not even nuclear bomb could destroy them. Boylston Street. The same Boylston Street where the two bombs exploded this past afternoon, sending plumes of white smoke and shrapnel into the air, shattering storefront windows that may well have once had that Mosler Safe advertisement pasted against them.

You can believe what you want to believe. You can read of this and think it mere chance and happenstance and dismiss it all as another example of inevitability being peddled as profundity. After all, Robert Lowell was a Boston Brahmin and you can’t go to any corner in the bloody city without running into something one of the members of his extended family touched. You can choose to subscribe to the theory that he just happened to write a poem describing a 1.5 mile stretch of an 89.6 square mile city which coincidentally used a piece of imagery involving a bomb explosion on possibly the exact spot where the first bomb attack on America in over a decade occurred. That’s your decision. I’ve already made mine.

Like Loading...
‹ Poetic License With America
No More Bullets: Is This The End of The Line For Senate Gun Control? ›