This Friday will see the release of 42, the latest in what looks to be Hollywood’s cloying habit of turning seminal moments in the racial integration of American sport into hackneyed, overly-sentimental moneymakers. That 42 is the story of Jackie Robinson, the man who first broke the color barrier in Major League Baseball with the Brooklyn Dodgers, seems to be fairly immaterial given the recent history of Disneyfied socio-athletic filmmaking and the underwhelming content offered in the movie’s trailer. Honestly, if you watch the trailer for 42, you won’t find a damn thing that substantively differentiates it from football integration films like The Express & Remember The Titans, basketball flicks like Glory Road or swimming movies like Pride (yes, you read that right, swimming). You can count the hackneyed cinema tropes by the handful in 42′s two and a half minute preview: hero confidently predicting his own greatness? -check- obligatory shot of angry coach slamming doors and destroying inanimate objects while telling players that the only thing that matters on this team is how you play ball? -got it (twice)- Douchebag, crew cut white guy on hero’s own team who tells him how they don’t take kindly to negroes on their team but will eventually come to embrace the hero by the end of the film? -oh yeah- dialogue where the hero’s best white friend on the team predicts seemingly preposterous future tribute to hero’s greatness? -they go there—you couldn’t create a more generic inspirational sports movie trailer if you tried.

Granted, it might seem like I’m jumping the gun with the pessimism considering the fact that I’ve only seen the trailer for the film, but I have my reasons, chief among them being the fact that there are zero advance reviews of the film out so far and the only footage available to critics and the general public is a set of well manicured promotional spots. Almost without fail, anytime a large movie studio—in this case Warner Brothers—makes a point of keeping a film so close to their vest is because they know they have a Grade A piece of schlock on their hands and they want audiences to come pouring into the theaters on opening weekend before they have a time to digest the slew of at best mediocre reviews the movie is sure to garner. 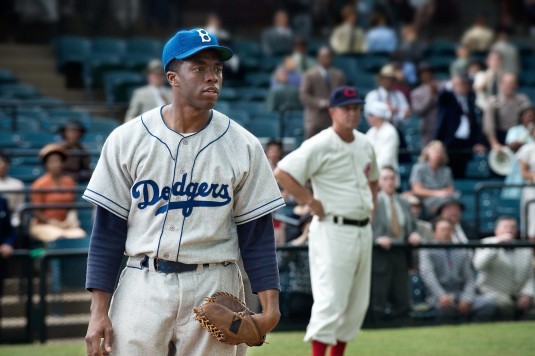 Chadwick Boseman as Jackie Robinson in “42”

Instead of engaging in the highly stylized version of history that 42 seems to be embracing, I encourage you to honor the memory of the late Roger Ebert by watching the captivating 1994 documentary Hoop Dreams, which follows the paths of two young African-American teenagers from the poorest corners of Chicago as they try to parley their skills on the basketball court into college scholarships. Ebert named Hoop Dreams as the best film of the 1990s—not best documentary…best film—calling it, “One of the best films about American life I have ever seen.”1 It is a gorgeous and poetic look into how sports are nestled deep in the heart of socioeconomic and racial struggle in the United States and is a testament to the transformative power of the movies. Of course, if you’re not in the mood for a 171 minute documentary, you can also enjoy brilliant cinema dealing with the intersection of race and sport through the 2008 film Sugar, which follows a young Dominican pitcher as he goes through the ringer of Major League Baseball’s farm system and is faced with the reality of what the American Dream actually looks like for the 99% of Latin American prospects who never make it to The Show.

It’s not that I want 42 to be mediocre, it’s just that I’m fairly confident that it will be. The production company responsible for the film, Legendary Pictures, has a CV filled almost exclusively with superhero films (The Dark Knight Trilogy and The Clash of the Titans movies), films that are 99% eye candy and 1% content (300 and The Watchmen)—and comedies starring Zack Galifianakis (The Hangover movies and Due Date). The only sports movie the studio has ever done is We Are Marshall, a flick that was so sappy that it managed to turn a the genuine tragedy of the 1970 Marshall University football team plane crash into a well-acted Hallmark card. And, if you were expecting a seasoned, imaginative filmmaker with a history of tackling racial issues like Spike Lee or Antoine Fuqua to direct the film, you will be sorely disappointed. In the director’s chair for 42 is Brian Helgeland, an accomplished screenwriter (LA Confidential and Mystic River) who hasn’t been associated in any way shape or form with a good movie in about a decade. Helgeland’s last directorial outing, 2003’s Heath Ledger vehicle The Order, was so godawful that it couldn’t break the double digit barrier for positive reviews on Rotten Tomatoes. As Entertainment Weekly’s Owen Gleiberman said of The Order, “it was so lethargic, I began to think of watching it as some sort of atonement.”2 As for the acting potential in 42, I’d say it’s fair-to-middling at best.

The man pegged to play Jackie Robinson is Chadwick Boseman, an young actor who has bounced around in small-to-medium sized TV roles over the past several years and has never been asked to do anything like carry a big budget film. The task at hand may be daunting, but it certainly isn’t unheard of to see an unknown actor turn in a whiplash-inducing performance on his first time out, even within the relatively narrow confines of sports cinema. Thirteen years ago, a sixteen year old kid named Rob Brown turned in a phenomenal performance in Gus Van Sant’s basketball-themed coming of age drama Finding Forrester. Of course, Brown—now in the cast of the HBO series Treme—had the benefit of being surrounded by an Oscar award winning director in Van Sant along with three actors who had golden statuettes at home—Sean Connery, F. Murray Abraham, and Anna Paquin—Boseman will be joined on screen by former Law & Order: SVU star Christopher Meloni and with Harrison Ford, who seems to have gotten into character for playing Dodgers GM Branch Rickey by gargling Qwikrete every morning for a year.

To be honest, I’m just Jackie Robinsoned out. The release of 42 on Friday will mark the 4th time Jackie’s historical personage has starred in a feature film and after what I can only assume will be a healthy weekend box office draw, Monday will bring about the 10th annual observance of Jackie Robinson Day. As they have for several years now, every single player, manager and umpire will don a jersey sporting Jackie’s number 42 and stadiums across the country will have small ceremonies honoring the legacy of the first man to break the color barrier in baseball. All 30 MLB teams have retired Robinson’s number, making it so no one can wear the number 42 on any occasion, save Jackie Robinson Day3. Robinson has achieved mythic status because he was first, and in America we love firsts. With that being said, we generally don’t give a good goddamn about seconds, and the second black man to integrate Major League Baseball has been unjustly relegated to a historical footnote. 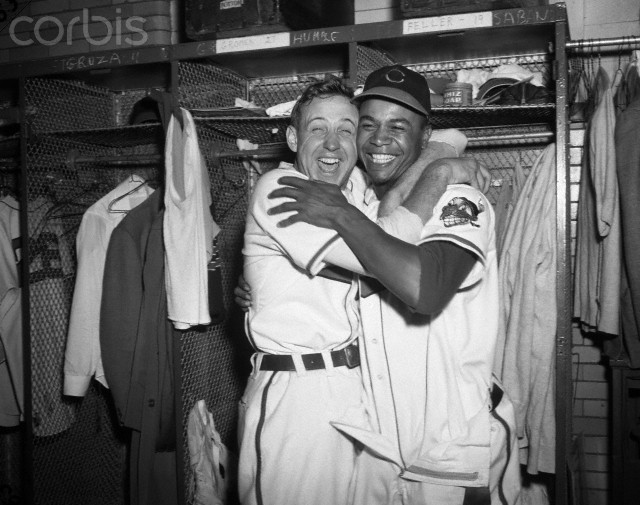 The second man to break baseball’s color barrier and the African-American to play in the American League was Larry Doby, a Hall of Fame Center fielder in his own right and a man who did just what Jackie Robinson did, but without the fanfare. Brought in by Cleveland Indians owner Bill Veeck in July of 1947, Doby played his first game in the majors less than 3 months after Robinson had played his. Unlike Robinson, who was strategically sent to the minor leagues in Montreal before appearing with the Dodgers, Veeck bought the rights to Doby’s contract outright from his previous team, the Newark Eagles, making Doby the first man in baseball history to go directly from the Negro Leagues to Major League Baseball. In fact, Doby did rack up a number of firsts himself, beginning the following year where he became the first African-American to hit a home run in a World Series and, along with the legendary Satchel Paige and Cuban emigre Minnie Miñoso, the first to win a World Series as well. In the clubhouse after Cleveland’s game 4 win in which Doby went yard, a photograph was taken of that day’s starting pitcher, Steve Gromek, joyously hugging Doby. It has been described by some as being a definitive turning point in the integration of baseball, showing a moment of genuine feeling and shared happiness between a black and a white player.

Larry Doby went on to rack up over 250 home runs over his 13 year professional career, but was forced out of the game by a series of ankle injuries that left him unable to perform as he used to. Doby went on to work as a scout and in various coaching capacities in the Majors during the 1970s, eventually being hired by the man who first gave him a shot, Bill Veeck, to manage the Chicago White Sox. Doby, who was once called the Buzz Aldrin of baseball by his former Indians teammate Bob Feller, was the second African-American man to manage a major league club, following in the footsteps of player-manager Frank Robinson. When asked about his status as second man to Jackie, Doby replied, “He was first, but the crap I took was just as bad,” adding, “Nobody said, ‘We’re gonna be nice to the second Black’.” I suppose no one said that they were going to honor the second black either. There’s a reason why14: The Larry Doby Story isn’t going to be playing on movie theater screens this Friday.

3Mariano Rivera is the lone exception to this rule, as he is older than time itself and was wearing the number 42 for the Yankees before the jersey retirement trend began.