Sometimes a body just gets tired with it all. I mean, there’s only so much dysfunction and ignorance a man can take before it starts to weigh on him, even if it’s coming from folks he doesn’t agree with. Every week it’s some fresh hell about the same old shit. One day you’ve got the artist formerly known as John McCain climbing atop his usual perch on the Sunday talk shows to give us the latest installment of Benghazi Kabuki Theater, and the next some corn-fed asshat in Missouri is submitting a state bill that would prohibit a high school biology teacher from failing a student for writing an essay on why the oceans are made of god’s tears1. Yes, there’s humor in it, but it’s the gallows humor of folks watching helplessly as parody effortlessly morphs into reality. For the love of god, the Monkey-Scopes Trial was almost 100 years ago. There is a large hadron collider in Switzerland that is being used to discover the infinitesimally microscopic elemental particles that give the universe’s objects mass and we’re still having the same debate about whether or not it’s kosher to teach the book of Genesis in biology class. Is it so much to ask for a political opposition that doesn’t conflate faith with science? Are there any Republicans who haven’t decided it would be a shrewd life choice to shun rationality and pander to the lowest common denominator of a fearful constituency?

As a matter of fact, there are still a precious few Rockefeller Republicans walking among us; men and women who worship at the altar of Adam Smith and consider “tax” to be a four-letter word, but who believe in gender equality and finding ways to shrink our carbon footprint. These are politicians who believe that conservatism and intellectual development are not mutually exclusive. If they have a dogma, it is one guided by the free market and not fundamentalist Christianity. This slowly dwindling group of moderates and fiscal conservatives are the descendants of Eisenhower and Bill Buckley—they are the solid core of the Republican Party that is revealed when you strip away the mendacity and manipulation of Goldwater and the Reagan Revolution. I may disagree fervently with their laissez-fare attitude towards social welfare and their firm embrace of the inequities inherent to capitalism, but more often than not I can find ways to respect them. I can respect them because, hidden behind the sensationalist prattle of their hyper-partisan colleagues, a select few Republicans understand the importance of remembering that they are the party of Lincoln and aspire to uphold his belief that “those who deny freedom to others deserve it not for themselves.”

Writing this week for The American Conservative, former Utah Governor and 2012 Republican Presidential Candidate Jon Huntsman cemented his place as the voice of right wing reason with a piece entitled, “Marriage Equality is a Conservative Cause.”2 It may seem almost blasphemous to claim the fight for same-sex marriage as a conservative one, but so far as the GOP is concerned, it’s a fairly easy case to make. As Sam Tanenhaus pointed out in The New Republic earlier this month3, the Republican Party as xenophobic cheerleader is a fairly recent development, arising principally during the Nixon years when the GOP realized they could use race relations as a way to poach southern Democratic and rural votes. During the 1950s, the Eisenhower Administration was actually fairly amenable to civil rights issues, ending segregation in the military, improving voting rights for African Americans and federalizing national guardsmen in Arkansas to enable the integration of the state’s education system. As a matter of fact, Ike raked in between 35 and 40 percent of the black vote in the 1956 election, leaving in doubt the question of which major political party was the standard bearer in Washington for Civil Rights. 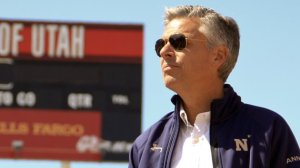 Another Cool Huntsman Fact: The Man Dropped Out of High School to Play in a Prog Rock Band Called “Wizard” …True Story

With that said, over half a century has passed since Eisenhower left office, so it can come as a shock to read a former Republican presidential candidate say that, “conservatives should start to lead again and push their states to join the nine others that allow all their citizens to marry.” In fact, Huntsman’s article is filled with sentiments that make you feel like you’ve been plunged in some parallel dimension where the Republican Party is no longer a bastion of unapologetic discrimination and deceit, but a legitimate participant in civic discourse on the future of social issues in America. Throughout the piece, Huntsman reluctantly takes on the role of the conservative Cassandra, warning his party’s rank and file of their approaching obsolescence. “The marketplace of ideas will render us irrelevant, and soon,” Huntsman writes, “if we are not honest about our time and place in history.” Translation: It’s not 1955 anymore boys. If we want to compete in 21st century elections, we need to modify our platform to fit a 21st century electorate.

Of course, this does smack a bit of John McCain’s recent comment on one of the 8,000 Sunday talk show appearances he’s made since the election, that the GOP needs to change it’s policy on immigration and recruit some more Hispanic voters if they want to stay relevant. It would be easy to take a cynical eye to Huntsman’s inclusive rhetoric, but his record as governor and his service as US ambassador to China during the first 3 years of the Obama administration speak to a genuine desire for bipartisan reform. During his time as Utah’s Governor, Huntsman supported legislation to enable civil unions for same sex couples when 70% of his constituency was opposed to the idea. Huntsman has also been advocating for immigration overhaul since before it was de rigueur to do so, giving his blessing to the DREAM Act and pushing for comprehensive immigration reform with other western governors in 2007. And, in what could be perceived as a dig against the blatant opportunism of McCain and others in the party, Huntsman writes that, “we must be happy warriors who refuse to tolerate those who want Hispanic votes but not Hispanic neighbors.”

Now, despite my gushing, not everything about the man is all buttercups and sunshine. Huntsman did support legislation restricting abortion rights in the state of Utah and he has endorsed the idea of a border fence with Mexico. Going beyond social and foreign policy issues, the man’s fiscal policy is an affront to everything I believe is right and good for the welfare of the American people, as it essentially removes whatever little taxes and restrictions the super-rich and big business are subjected to, but I can deal with that. It’s just more of the usual pseudo-Libertarian claptrap that you get with the Ron Paul crowd minus the nonsense about going back on the gold standard, and it’s actually based in economic theory. I may disagree heartily with said theory, but I can have a discussion with people like Huntsman and walk away feeling like we made progress in finding common ground. Men like Jon Huntsman are operating on the same plane of reality as the rest of the developed world and his views further the public discourse on our direction as a nation. While he is a member of the Church of Jesus Christ of Latter Day Saints, Huntsman doesn’t believe science is incompatible with Christianity and once tweeted, “I believe in evolution and trust scientists on global warming. Call me crazy.” No, Mr. Huntsman, you are not crazy…but pretty much everyone else in your party is.

1For more on the attempted defamation of Missouri’s educational system, check out this article by Mother Jones’ Dana Liebelson: http://www.motherjones.com/mojo/2013/02/intelligent-design-missouri-evolution