Thanksgiving is one of those things in American life that’s good not to think about too hard for fear of ruining the holiday altogether. In a vacuum, and as explained to a 3rd grader, Thanksgiving is a wholesome, historic parable about the value of cooperation and acceptance and charity. There are always cute little Crayola hand-turkeys papering the walls of classrooms, Matt Lauer is on TV introducing a 75 foot inflatable Charlie Brown and folks that normally treat family gatherings like reenactments of The Hunger Games manage to manufacture enough tryptophan-induced goodwill to stand one another’s company for an afternoon. With enough sugar and carbohydrates coursing through their systems to put 75% of the world’s inhabitants into a diabetic coma, families make sure to give thanks for the things they spend the other 364 days of the year taking for granted and then, as their veins turn to gravy, everyone gathers around the TV for that most American of holiday traditions: Thanksgiving Day Football.

It’s a heartwarming scene, to be sure, but present it to someone who wasn’t raised on this steady diet of well-meaning propaganda and a number of questions immediately crop up. Why does your country celebrate a holiday about appreciating one’s blessings by retelling a story in which a bunch of Puritans honored the kindness of the Wampanoag Indians by giving them smallpox and peppering them with musket balls? How does it make any sense to give thanks for the things you have just hours before inciting planned consumer riots to get a newer version of the TV you already own for 50% off? And, why in the name of all things good and decent is there a sports team playing named the Redskins playing a game on Thanksgiving, a holiday meant to supposedly honor the generosity of a people who were the victims of the largest genocide in the history of modern civilization? 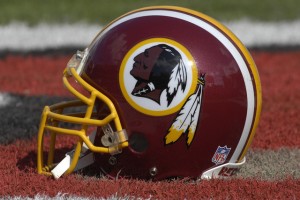 Apparently, this logo is kosher.

I can answer the first two questions fairly easily: we celebrate the story of Thanksgiving to assuage our genocidal guilt and rewrite history, while we stampede though Target in the middle of the night on Black Friday because this is America damnit, and our nation was formed around the idea that you can buy happiness. It ain’t an accident that Jefferson’s ubiquitous Life, Liberty and The Pursuit of Happiness line was taken straight from John Locke’s assertion that all men are entitled to Life, Liberty and Property. We are a country that just straight up loves stuff. But, I can’t offer up any reasonable explanation for why the NFL franchise in our nation’s capital uses an ethnic slur as a team name. Maybe its because we’ve lived with it for so long, but the vast majority of sports fans never give a second thought to the fact that the team they root for or against has a racial epithet for a mascot. If Detroit just decided that they were going to change their NFL team name from the Detroit Lions to the Detroit Negroes, I’d like to think people would immediately flip a collective shit and boycott the team. In the event that Arizona decided to switch their franchise name from the Cardinals to the Beaners, I’d imagine there would be millions of people in the streets of Phoenix setting their season tickets on fire. So, what is there to explain why people aren’t boycotting the Washington Redskins?

Well, if we start anywhere it has to be with that often odious word, tradition. The Redskins have been so named almost from their introduction to the NFL in the 1930’s1 and for the entirety of their stay in the nation’s capital. Once a name gets attached to a team and a city, it can be remarkably difficult to break it loose again. In baseball, the Cleveland Indians and their racial caricature of a logo, “Chief Wahoo”, have remained virtually untouched for almost 100 years, while the Atlanta Braves still have a Tomahawk as their logo and popularized the “Tomahawk Chop” fan celebration in the early 1990s. Despite decades of protestation from the American Indian community and civil rights advocates, nothing has been done to remedy the situation. The only arena in which these groups have had a limited degree of success has been in collegiate athletics, where university funding is usually directly tied to state and federal aid. In 1997, Miami University (OH) voluntarily changed their mascot from the offensive Miami Redskins, to the Miami RedHawks, and the University of Utah has continued naming its sports teams the Utes with the blessing of the Ute Indian Tribal Council, while changing their mascot from “Hoyo” the Ute Indian Boy to “Swoop” the red tailed hawk.

Building on the theme of tradition, the Washington Redskins franchise has a history of being racially insensitive and prejudicial in ways that go beyond their choice of mascot. The teams original owner, George Preston Marshall was vehemently opposed to signing or drafting African-American players and was the last hold out among all NFL owners. While the Cleveland Browns were the first football team in the modern era to sign African-American players in 1946, every single team in the NFL had integrated by 1952 except for the Washington Redskins. Marshall was so insistent that blacks would not play on his team that he held out for a further ten years, finally drafting an African-American player in 1962 after then Attorney General Robert F. Kennedy sent the team an ultimatum saying that the government would revoke the team’s 30-year lease on their stadium unless they integrated. Marshall responded by drafting Syracuse tailback and Heisman Trophy winner Ernie Davis, only to be rebuked by Davis, who said flatly, “I won’t play for that S.O.B.” The team was forced to trade Davis to Cleveland for another black running back, Bobby Mitchell, who only went on to retire with the 2nd most net yards from scrimmage of any player up until that point. It shouldn’t come as a surprise that, in the 16 years between when racial integration began in the NFL and when the Redskins finally joined the party, the team went 69-123-8 and didn’t make the playoffs once.

With Robert Griffin III’s absolutely electric play at quarterback this season it’s a shame that the specter of racism still looms over the franchise. As recently as 1987, then Redskins quarterback Doug Williams found himself becoming a one-man media circus when he was the first African-American quarterback to start (and then win) a Super Bowl. Last week, RG3 was just one of nine NFL quarterbacks of color to start for their team and the only real barrier left for integration in pro football is at head coach and in the owner’s box. It would be nice to think that Redskins owner Daniel Snyder would change the team’s name of his own volition, but until his franchise stands to lose money from the racist logos on their merchandise he won’t so much as give it a thought. Only the fans can effect any real change in this situation and, until people begin to connect the American Indians in their Thanksgiving parables to the ones plastered on players’ helmets, it doesn’t look like that change is going to come anytime soon.

1They were known as the Boston Braves briefly in 1932, before becoming the Boston Redskins when they started playing their games in Fenway Park as second fiddle to the Boston Red Sox. In 1937 the team moved to DC and has kept the name ever since.