It’s no secret that the Ancient Greek gods and goddesses were a sick and twisted bunch of sadistic pricks. Any group of deities that are led by a guy who thinks it’s a good idea to turn himself into a swan and rape a woman aren’t exactly exemplars of morality. Part of what makes Greek mythology so much fun is that their gods were even more depraved and jealous than most human beings are. Half of the stories that we still have about them involve an enraged goddess capsizing some poor bastard’s ship because he didn’t pick her in a beauty contest or a god sneaking down from Olympus while his wife isn’t watching to seduce whatever sweet young thing he happened to have his eye on that day. Most Greek myths are like the Petraeus scandal if President Obama had the power to make an eagle swoop down from the top of the Capitol every morning to eat the General’s liver and if Jill Kelley were actually a Siren whose irresistible song made level-headed FBI agents take their shirts off. I actually wouldn’t discount that last part from being true—the woman did create a charity for adult cancer patients and use all of the money on parties, entertainment and travel expenses for herself and her friends, so she’s clearly evil—but the point is that the Greek Gods were capable of coming up with some forms of torture that make waterboarding look pleasant in comparison.

When someone did something that the gods found particularly heinous, he or she would be relegated to the most dank and miserable corner of their hell known as Tartarus. According to the Greek poet Hesiod, it would take nine days for an anvil dropped from heaven to reach us here on earth and a further nine days to make its way down to Tartarus. I’ll grant you that the physics behind all that is a bit fuzzy, but it would still be another 2400 years before Newton proved the existence of gravity so we can cut the guy a little slack.1 The important thing to take away from all this is that Tartarus is as wretched as heaven is resplendent and that it’s really, really far beneath the earth. It was the Alcatraz of ancient hellscapes and among its inhabitants were 49 of the 50 women known as the Danaides. Despite the fact that their name makes them sound like a 1960’s R&B girl group, the Danaides were so named after their father, Danaus, who was a grandson of the sea god Poseidon and generally thought to be a pretty big deal. According to the myth, Danaus married off his 50 daughters to his brother’s 50 sons and ordered them to kill their husbands/cousins2 on their wedding night. Everyone followed through with daddy’s homicidal plan except for one daughter, Hypermnestra, who decided not kill her new beau Lynceus after he agreed to not sleep with her on their wedding night. Of course, Lynceus ends up killing his wife’s evil father and all the rest of the Danaides were sent down to Tartarus.

A representation of the Danaides by John William Waterhouse

One of the gods’ favorite ways of punishing those who disobeyed them was to provide them with a banal, painful and meaningless task to perform over and over again for all of eternity. You’re probably familiar with some of the Danaides neighbors in Tartarus, like Sisyphus, who is forced to roll a boulder up a hill knowing that as soon as he reaches the top it will roll back down and he’ll have to start over again. There’s also Prometheus, who was chained to a rock and forced to watch as an eagle swooped down and ate his liver every day, only to have it grow back overnight so they can do the whole thing over again. The Danaides punishment mirrored this maddening repetition as they were forced to fill a bathtub with water to wash their sins away. The only problem was that the bathtub had a hole in the bottom of it so that, as the Danaides went out to the river to replenish their urns, the absolving water that they had just dumped into the tub had slowly trickled out onto the ground until by the time they made it back with more water the tub was bone dry. After all of their efforts they were always just as far from salvation as they were when they started.

I only bring up this myth because it seems particularly prescient in light of the recent bloodshed in Israel and the Gaza Strip. Tomorrow will mark the beginning of the second week of hostilities between the Israelis and the Palestinians in the which thousands of rockets have been launched over both sides of the walls surrounding Gaza. This conflict marks the first time in four years that there has been a formal exchange of force in Israel, but sporadic rocket fire and IED detonations have never really stopped. As of right now, 46 Palestinians have been killed by targeted airstrikes from the Israelis, although 15 of those killed were civilians. A further 400 civilians are believed to have been wounded as well as the bulk of the damage to this point has been incurred by the Palestinians who have vastly inferior military power and resources. Only 3 Israelis have been killed in the fighting thus far, but the Palestinians have been able to fire their long range rockets near Tel Aviv and Jerusalem for the first time in decades. Israel has initiated what they are calling Operation Pillar of Defense and, in addition to the coordinated air attack, have called up 75,000 reservists to prepare for the possibility of a ground invasion of Gaza in the coming days.

Even if they “win” this particular conflict, whatever that means, all they gain is a return to an already untenable status quo. In a post-Arab Spring middle east, Israel’s isolation in the region becomes even more pronounced and even more dangerous. Egyptian Prime Minister Hesham Kandil visited Gaza City yesterday to show solidarity with Hamas and the Palestinian people. While there, Kandil was taken to a local hospital along with the territory’s Prime Minister, Ismail Haniyeh, to see some of the victims of the conflict. While they were there a man came towards them screaming and holding up the body of 4-year old boy who had just been killed. Handing the deceased child towards them, Kandil and Haniyeh cradled the boy in their arms, their hand and their clothes becoming stained with blood. 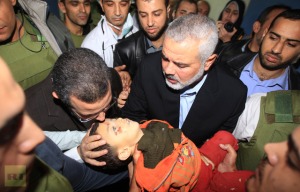 The Palestinians claim that the child was killed by an Israeli airstrike, while Israel is adamant that they had nothing to do with the boy’s death. Ultimately, the factual underpinnings of the child’s death are not nearly as important as the child itself. The images of that poor boy lying limp and lifeless in Palestinian and Egyptian arms are visceral reminders of the senselessness of wars in which Israel is increasingly being seen the aggressor. Whether they are attacking in self-defense is irrelevant. They are the ones who invaded Gaza 4 years ago and may very well invade Gaza again in the coming days. Within this first week of fighting the ratio of casualties between Palestine and Israel has been 15-to-1.

Living in America, we are not privy to the realities of global attitudes towards Israel. This most recent presidential campaign was not used as a platform for having a substantive discussion about dealing with the unrest in the Middle East; it was utilized by both candidates to express the depth and breadth of their love for Israel. There was no mention of the fact that International attitudes towards Israel are souring and that even our closest allies have negative opinions of the country’s influence. A 2012 poll from the BBC showed that at least two-thirds of the population of the United Kingdom, Germany and Spain have negative attitudes towards Israel.3 With each disproportionately bloody attack on Gaza, Israel is alienating itself from the rest of the world and perpetuating a policy on Palestinian and Islamic relations that can only serve to further ostracize themselves from the global community. Israel is trying to fill a bathtub with a hole in the bottom full of water and until they find a way to stop that tub from leaking, all they’re doing is wasting perfectly good water.

1If we assume that it takes 18 days, or 1,555,200 seconds, for a blacksmith’s anvil to get from heaven to hell, physics tells us that, in a vacuum, the anvil would travel 7,369,097,283 miles downward. To give you some idea how far 7.37 trillion miles is, the earth’s average distance from the sun is about 93 million miles, meaning that you could travel from to the sun and back roughly 40 times in the time that Hesiod claimed it took to get from heaven and Tartarus. Take these numbers with a grain of salt as I did get a C+ in high school physics.

2In their defense, it’s kind of hard not to marry someone you’re in some way related to when there are only a couple thousand people in your village. I mean, Adam and Eve’s kids had to sleep with each other and they were siblings. God, creation myths are creepy.