Home › Social Justice › A Nation Divided Against Itself

A Nation Divided Against Itself

November 6th, 2012: It will be a day that marks the 57th time that the American people have come together to elect their President. It’s worth noting that only for the last 12 of these eruptions of democracy have all citizens been guaranteed the right to vote by the constitution and that even these guarantees are frequently rendered moot by the machinations of those who wish to stop certain parties from voting. Anyone who has stood in an early voting line for 7 hours beneath the hot Florida sun can attest to the hollow ring of such a promise, as can anyone who lives in a state that has embraced the draconian voter ID laws that were formed to combat non-existent voter fraud with manufactured voter suppression. All of these things aside, many of us will be participating in the most elemental expression of our democratic republic tomorrow and, by day’s end, we should know whether we have re-elected our nation’s 44th president or begun to inaugurate our 45th.

151 years ago this Tuesday, another briefly sovereign American nation elected its first and only president. On November 6th, 1861, Jefferson Davis was elected unanimously as President of the newly founded Confederate States of America. Running unopposed in the election, Davis and his Vice President, Alexander Stephens of Georgia, won all 109 electoral votes, although the victory was largely symbolic as Davis had already been acting as Provisional President of the CSA since that February. So, in distinctly Southern fashion, the winner of the only election in Confederate history was a man who ran against nobody for a job he already occupied. What was supposed to be a 6-year term was cut mercifully short by the end of The Civil War and the inauguration of Jefferson Davis has been relegated to the cutting room floor of history. 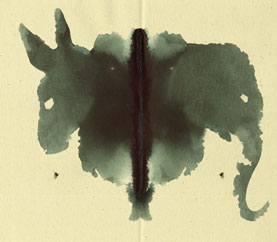 Tell me what you see.

Fast forward a century and a half and not much has changed. The ideological makeup of America has retained its fundamental shape since the days of Lincoln and Davis, with westward expansion only adding more fuel to the partisan fire. The political leanings of the either side of the Rocky Mountains are just as entrenched now as the beliefs of those on opposite ends of the Mason-Dixon. Of the 13 states that were formally or informally considered part of the Confederacy, only two—Virginia and Florida—have a legitimate chance of being won by the liberal incumbent Barack Obama, who is clearly heir to the old Republican mantel of Abraham Lincoln. That’s not to say that Mitt Romney is a 21st century Jeff Davis, but we both know which candidate is a representative of the abolitionists (equal rights advocates) and which one is beholden to the plantation owners (The 1%).

It may sound alarmist and hyperbolic to compare modern day America with its Civil War-era counterpart. Perhaps a more apt and less dated juxtaposition would be with America in the middle of the Civil Rights Era. But, ultimately, it doesn’t matter what century you reach back to for context. It’s all just one big continuum of discord and enmity. There ain’t much difference between the lynching of a black man in rural Mississippi and the shooting of a 17-year old black kid in suburban Florida. Telling an elderly hispanic woman that she can’t vote without a picture ID is the same as when her grandfather was told he couldn’t vote unless he passed a literacy test. Red State vs Blue State is just our new way of saying North vs South now that the two sides aren’t as geographically segregated. I’m always amazed that whenever I drive up I-75 out of Cincinnati I invariably end up seeing more of the Stars and Bars the farther north I go. It doesn’t make damn bit of difference if you’re two hours into Michigan or driving through rural Minnesota. The South isn’t a place anymore; it’s an idea.

Regardless of who ends up winning this thing tomorrow, the divide will still be there. As a matter of fact, it will have grown deeper as half of the country prepares for the coming apocalypse by retreating as far into their partisan cocoon as humanly possible. Please do not kid yourself. There are two Americas now and they are mutually exclusive. The right has realized this for decades now and they have couched their ideals and causes in martial rhetoric. There’s the war on family values and the war on American culture and the war on (Christian) religion. Ever since the gains made by the civil rights movement and the women’s movement, the left—especially the center-left—has acted in a conciliatory vein, inching further and further to the right as the years go by. Bill Clinton is hailed as the new Democratic messiah in many circles, but his “Personal Responsibility and Work Opportunity Act” has done more to disenfranchise impoverished Americans than anything Nixon and Reagan dreamed up. President Obama may be a liberal in name, but his policies on warrantless wiretapping, indefinite detention and unauthorized drone strikes are downright Orwellian. As Yeats once wrote, things fall apart, the center cannot hold.

I will close with the words of the great Langston Hughes, because sometimes you need someone else to describe the way you feel because you’re so consumed with feeling that you barely even know yourself:

I say it plain,

America never was America to me,

And yet I swear this oath—

Out of the rack and ruin of our gangster death,

The rape and rot of graft, and stealth, and lies,

We, the people, must redeem

The land, the mines, the plants, the rivers.

The mountains and the endless plain—

All, all the stretch of these great green states—

Like Loading...
‹ Love is Love & Love is the Law: Same-Sex Marriage in America
Go Too Far to the Right and a Home Run Becomes a Foul Ball ›