Disclaimer: I will not under any circumstances so much as mention Mitt Romney’s recent actions in this article. His comments regarding the attacks in Libya & Egypt were so obscenely mendacious that dignifying them with a cogent and rational response is a waste of my time and yours. I would much rather take up this space discussing things that, I don’t know, have some grounding in what the rest of the world knows as reality

We are not welcome. I don’t care how many foreign policy briefs you’ve read. It doesn’t matter if your retinas have been seared away by a decade’s worth of non-stop cable news “on-the-ground” reports featuring Anderson Cooper playing journalist in some bombed out ex-village. And it most certainly does not make a difference what our President—be he Obama or Bush or whoever may come next—says about our relations there. We are unwanted intruders in the Middle East. To them we are some kind of invasive species, like kudzu or zebra mollusks, that has done nothing be fruitful and multiply ourselves all over everything they hold dear. Surely, there are some folks in the Arab world that have taken a shine to western culture and all its trappings, but that is not the majority. Otherwise, after their first “democratic” election, Egypt wouldn’t have elected a leader of the supremely conservative Muslim Brotherhood as their President. If they wanted us there, the main story coming out of Afghanistan after an 11 year stay wouldn’t be concerning a rash of “green on blue” killings by Afghani security soldiers on their trainers in the US military. Were we accepted within the Muslim world, we wouldn’t be greeted with stories like the one we heard today.

While the details are still hazy, there are several things that we know about the events that have transpired over the past 48 hours, We know that on Tuesday night, riots broke out outside of the American Consulates in Egypt and Libya. We also know that these riots were at least partially caused by outrage over a film from a no-account California filmmaker which refers to Islam as “a cancer” and depicts the Prophet Muhammed as a grotesque caricature of sexual deviance. The riots in Egypt caused the usual amount of chaos and destruction that comes with such things, but it was a different story in Libya. The US Ambassador to Libya and three other Americans were killed in an attack on the American Consulate in Benghazi, Libya’s second largest city. At the time the news was first reported it was thought that the murders were committed spontaneously by participants in the mob, but now administration officials are saying that the attack may have been planned. Given that the embassy killings took place on the 11th anniversary of the September 11th attacks, I somehow doubt that it can be chalked up to coincidence. 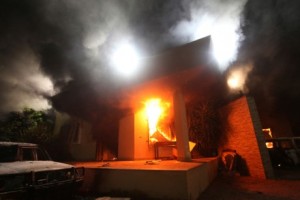 The American Consulate in Benghazi, Libya after the rioting on September 11, 2012

The deaths of Ambassador Stevens and the three other Americans in Benghazi are certainly tragic. The media narratives that will come out over the next few days will emphasize this tragedy and, hopefully, provide us with insight as to what exactly happened in Libya on Tuesday night and investigate the circumstances that surrounded it. What you will not hear, is a legitimate debate about whether or not we belong in the Libyas and Egypts of the world. As is pointed out in the latest issue of The Nation1, taking a political stance that is seen as isolationist or less interventionist is tantamount to political suicide. The driving vehicle of American foreign policy for almost a century now has been the idea that we are the world’s protector and benefactor. Libya—Iraq—Afghanistan—Kosovo—Vietnam; each war a declaration of our patriarchal largesse. With a military presence in just under 150 countries, it’s hard to find a pocket on this earth of ours where Uncle Sam hasn’t sent troops. America’s proven that it’s great at expanding, but the flip side is that we’re god awful at contracting.

In our current political climate it’s impossible for a major party politician to give support to a withdrawal of American presence anywhere without being labeled as a limp-wristed communist. For example, the Romney campaign released a statement preceding President Obama’s nomination speech that criticized him for having “diminished American influence abroad and compromised our interests and values” during his time in office. To the first charge, I say, “great!” America is not the world’s police force nor are we it’s nanny so we need to stop acting like it. We also have to disabuse ourselves of the fact that we “know what’s best” for the countries we occupy. Time after time, we go into some foreign country to remove some despot, rack up hundreds of thousands of casualties, depose the guy who was in power and leave the place such a horrific mess that before we’ve gotten on the plane back home an equally abusive government has already installed itself. Are these the values and interests to which the Romney camp was referring? Where is the morality in a scud missile or a drone strike?

I’m not wide-eyed and bushy-tailed enough to believe that we’ll see a presidential candidate in the near future who openly opposes our peculiar 21st century brand of American Imperialism. At this point, a legitimate reduction in defense spending seems about as likely as the abolition of the electoral college. In our new America, to advocate for peace is to be a pussy. Pardon the language, but there’s no delicate way to put it that conveys the contempt and noxious machismo of our military-industrial complex and the politicians who worship at its altar. At the coming debates there will be no questions about the legitimacy of our foreign policy in the eyes of the world. Never will we ask of ourselves if the people to whom we bring a sad excuse for democracy ever asked for us to be there in the first place, and as long as we leave that question unexamined our embassies will come under fire. There’s little use in a diplomat when he comes to greet you in a tank.