In Burma, Hope & AIDS Medications Hard to Come By

Of the 240,000 people in Burma (Myanmar) living with HIV, roughly half are in desperate need of life saving ART medications. Most of them will never get them and for many of those who do, it will have come too late. Estimated national figures show that in 2010, less than 25% of deathly ill People Living With HIV/AIDS (PLWHA) were receiving lifesaving antiretroviral treatment. This comes as no shock to international observers as Burma has a tragically underfunded and poorly administered health care system. Burma ranked 190th in the World Health Organization’s 2010 ranking of global health systems, good enough to place them dead last among all WHO member states. Yet, there is often little to prepare us for the images and stories that come from such impoverished corners of the world, especially when exemplified by a disease as savage as HIV. 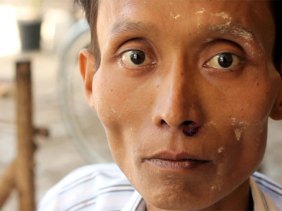 This man, like hundreds of thousands of other HIV+ Burmese, is in dire need of medications that may never come

In the video below, you can see a report from The Guardian on the HIV crisis in Burma. There are numerous interviews with Burmese men and women currently dying from the disease along with HIV advocates within the country. Philanthropic health organizations working in Burma, like Medicines Sans Frontiers, are doing their best with what they have to stem the tide of the epidemic, but they are woefully underfunded and understaffed with little hope for the immediate future as recessionary spending cuts have bled their already meager coffers dry. This short video will give you an idea of how dire the Burmese situation currently is.

Like Loading...
‹ Why is Ernie Trying to eat Rubber Ducky’s Face Off? A PSA About Bath Salts
Out of Sight & Out of Mind at the G20 Summit ›