Keep The Promise 2012: Marching With Wyclef

Wyclef Jean to Perform at the Keep The Promise 2012 March on Washington for HIV/AIDS.

When I think of Wyclef Jean, the first celebrity that comes to mind for comparison is…Paul Newman. Stay with me here. I realize that one is a dead white actor and the other is a very much alive black musician. Technically speaking, there isn’t that much common ground between Cool Hand Luke and Gone Til November, other than them both being awesome. But, to many people of my generation (and certainly those that come after ours), Paul Newman is “The Salad Dressing Guy” who gives all the proceeds of his company to charity. I mean, yeah he was the greatest leading man of his generation and had more Oscar nominations than there are days in a week, but he makes a mean Balsamic Vinaigrette. I have no idea whether Wyclef has any intentions of opening a line of organic foodstuffs, but he may well be remembered more by some as a philanthropist than as a artist in the same way that Newman is. 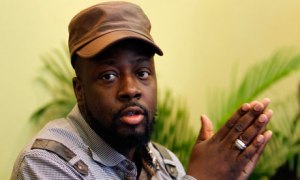 Wyclef Jean will be continuing in his efforts to give back to the global community on July 22 when he will headline the Keep The Promise 2012 March on Washington in an effort to raise awareness and support HIV/AIDS related activism nationally and abroad in places like his native Haiti. This is not the first time Wyclef has participated in an event in support of the HIV community, as he performed at the UNAIDS-sponsored Evening of Remembrance & Hope: Uniting The World Against AIDS in 2006. The cause is one that holds special significance for Wyclef and other Haitian-Americans as Haiti has one of the highest rates of HIV in the Caribbean. A recent study by UNAIDS shows Haiti to have a prevalence rate of around 1.9%, which is quite pervasive, but falls well short of the more the 3% of Washington DC’S population that is living with HIV. If there were ever a statistic to underscore the need for HIV advocacy in America, it is that the most impoverished nation in Latin America only has about 2/3 of the HIV prevalence as the capitol city of the wealthiest nation on the planet.

In 2005, Wyclef established the Yele Haiti Foundation, which provides humanitarian aide and emergency relief to the country. Wyclef, who grew up in Haiti until the age of nine, has been increasingly involved with the welfare and politics of the nation over the past decade, going so far as to run for president during the 2010. However, the candidacy did not go very far as a Haitian electoral commission ruled him ineligible to run as he hadn’t been a resident of the country for five consecutive years. This has not stopped Wyclef’s humanitarian efforts and he continues to not only remain active with Yele Haiti, but has made a number of records that deal with his experiences in and passion for Haitian rights and other causes. That passion will be on display on July 22 as Wyclef marches on Washington with us to support through song the efforts to keep HIV issues on the front burner of global policy.

Like Loading...
‹ Tell Us What You Think
When the Legend Becomes Fact: The Middle Class in America ›