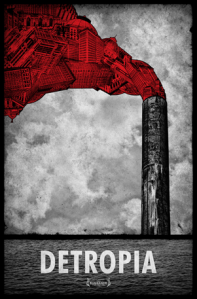 It is just incredible how many talented independent filmmakers we have working today. A week or so ago, we spotlighted Lisa Biagiotti’s documentary about HIV and inequality below the Mason-Dixon line, deepsouth, and today we’d like to turn your attention to a documentary that examines a city that once exemplified everything that America can offer and now represents pretty much everything America can take away: Detroit. The film, Detropia, is by documentary filmmakers Heidi Ewing & Rachel Grady who also made the phenomenal Jesus Camp and The Boys of Baraka. I’ve posted a trailer for the film below and you can reach their webpage on Kickstarter ( http://www.kickstarter.com/projects/detropiathefilm/detropia-were-releasing-our-doc-independently ) if you want to find more about the film and donate to its production/distribution as it is being released independently by the filmmakers themselves. They hope to release the film in about 25 American cities so hopefully it will be coming to a theater near you

I also have to share with you a personal story about my first visit to Detroit that is still unbelievable to me. A couple years ago I went up to Ann Arbor to visit a friend and we decided to make the 45 minute drive to Detroit and catch a Tigers game. However, since neither of us had seen the city before, we figured we would bypass the interstate and drive into the city via state highways and back roads so we could look around. I thought it might be a good idea to stop by at the intersection where the 1967 Detroit Riots started. So, we headed for Rosa Parks Boulevard (formerly 12th st) and Clairmount St. to check it out. I wasn’t prepared for what I saw because what I saw was pretty much…nothing. I had expected some sort of monument or development of some kind. Surely the city of Detroit would want to wipe away the memory of this horrific event by creating something that resembled progress at what was its epicenter.

When we got there, it was like pretty much every other block we passed on the way there: knee-high grass covering empty lots or obscuring the foundations of vacant homes; cracked pavement with life shooting it’s tendrils out from ground where it had no business being. The only thing resembling a monument was a sculpture in a dilapidated park on one of the corners that looked as its best days were behind it, if it ever had any. I don’t even recall seeing a plaque commemorating the lives of the 43 men and women who were killed and hundreds more that were injured during those riots. There may be one there, but if there is it certainly isn’t prominent. It has all but been forgotten, a lot like the city itself.