It is easy to look at the discordant yammerings of the speakers on the first night of the Republican National Convention and lose yourself in the inherent absurdity and grotesqueness of it all. From the attempts to paint undocumented immigrants as homicidal menaces to society who have taken away our jobs and our way of life to the seemingly endless rehashing of the tragedy in Benghazi which has already undergone more scrutiny than the Zapruder film over the past 4 years, many of us may be tempted to dismiss the RNC as little more than a live action version of The O’Reilly Factor—an event that reaffirms our belief that a Trumpified Republican party’s brand of populist conservatism is too far to the right to win a presidential election. However, a consistent pattern of underestimation and derision from his opponents on all sides of the political spectrum are precisely what has allowed Donald Trump to become the standard bearer of America’s oldest political party and his chances at victory in November rely on spectacles like the one that was put on in Cleveland last night.

Over the course of his campaign, Trump has sought to prove that delivery and stagecraft matter far more than facts to the voting public and, thus far, he’s been pretty thoroughly validated. In keeping with the old line from The Man Who Shot Liberty Valance that says, “when the legend becomes fact, print the legend”, Trump and many members of the GOP’s Freedom Caucus have set their energies towards the promulgation of disingenuous narratives through the power of conviction and repetition. Few if any of the themes used by Republican speakers on Monday night were empirically valid, but the facts that underlay them didn’t particularly matter as the audience in the Quicken Loans Arena and many watching at home had already internalized them and accepted them as gospel.

Take for example, the way that the RNC paraded out the family members of three Americans who had been killed by people who were not naturalized US citizens. Of the three speakers, two of them had lost their loved ones to car crashes where the other driver was intoxicated or high and the final one had been shot during what was apparently a gang shooting. With all of these instances—the two cases of vehicular manslaughter in particular—the country of origin of the person responsible for these deaths isn’t a terribly relevant aspect in assessing the crimes that were committed and how to keep them from happening in the future. 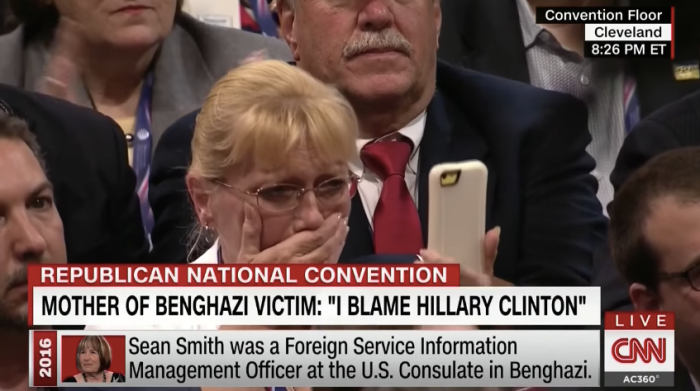 Considering the fact that, depending on the study, increases in undocumented immigrants have been shown to either decrease or have no demonstrable effect on violent crime rates, focusing on the citizenship status of the criminals cited during the RNC is not a productive way to address the issues of drug-related fatalities and gun deaths. But booking those speakers for the Republican National Convention is not about having a dialogue about how to prevent drunk and drugged driving or gun violence so much as it is to burnish their anti-immigration argument in an effort to drive voters to the polls. It’s the same logic—or lack thereof—that drives Trump’s claims that he’ll build a giant wall around our southern border and get Mexico to pay for it. There’s exactly zero chance of the Mexican government paying for the construction of such a wall, but it makes headlines and motivates Trump’s base.

Of course, if Trump is going to win in November, he needs to expand his message beyond his usual conservative comfort zone, something which seems to be a tall order considering the xenophobic chaos of the the convention so far. Given the degree to which he and his backers have doubled down on their brand of right wing populism, Trump will have a hard time winning over many of the Reagan Democrats and independents that the GOP has normally angled for in elections. The good news for Trump—and the bad news for the rest of us—is that he doesn’t have to. All he has to do is convince them that Hillary Clinton is such an unattractive candidate that they’d rather vote for Gary Johnson or Jill Stein or just stay home.

When Patricia Smith, the mother of one of the four Americans killed during the Benghazi attacks, tearfully exclaims, “Hillary for prison! She deserves to be in stripes!”, it does much more than lather the Trump train up into a frenzy. It also reinforces the narrative that Hillary Clinton is too disingenuous to hold higher office and that her political success has come at the expense of a inexhaustible litany of innocents that have left her record permanently tainted. The fact that there have been 7 Congressional investigations of her role in Benghazi and that none of them found anything proving willful wrongdoing on her part or anyone in the State Department is of minimal import. What really matters is pushing the idea of “Crooked Hillary” into the consciousness of the voting public and eroding any trust that they might have in her come November 8th.

If you peruse many left wing blogs, comment sections and Twitter handles, it’s hard to determine much difference in the assessment of Clinton’s fitness for The Oval Office. Generally, the progressive critique of Clinton—especially from the Bernie or Bust crowd, who cultivated a rather visceral distaste for the Secretary of State over the course of a year long campaign—focuses more on her relationship with Wall Street and her overall hawkish foreign policy than specific events like Benghazi, but its tone is remarkably similar to its right wing counterpart. Given that both Bernie and Trump rose to prominence on a populist platform advocating the ouster of corrupt, duplicitous elites, that shouldn’t come as too big of a surprise, but I don’t think I’m speaking out of turn when I say most pundits expected more of the Bernie crowd to come back to the Democratic fold after the primaries were over.

It is still possible that the bulk of Bernie supporters wind up reluctantly backing Clinton after the Democratic National Convention or once they’ve seen Trump do his song and dance on the debate stage and campaign trail for another 3 months, but Democrats and anyone who wants to avoid a Trump presidency can’t just count on that to happen. Between the rising poll numbers of Johnson and Stein, it is entirely possible that we have an election where a candidate can win The White House with less than 40% of the vote and—given that neither the Libertarians or Greens have any legitimate chance at victory—the winning party may well be the one who best stops the hemorrhaging of their support. The potential for a Trump Presidency lies as much with who doesn’t vote for Hillary as it does who does vote for him and the opening night of the RNC may prove to be an effective strategy in making sure that happens.