Home › Book Excerpts/News › A Most Wretched Man: The Vile Legacy of Andrew Johnson

A Most Wretched Man: The Vile Legacy of Andrew Johnson

For much of the 19th century, it was fashionable for academics and historians in the West to subscribe to the “Great Man Theory” of history. The Great Man Theory, as it name implies, contends that the course of human events are controlled by a small group of exceptional and heroic men. As the Scottish writer Thomas Carlyle once remarked, “all things that we see standing accomplished in the world are properly the outer material result, the practical realization and embodiment, of Thoughts that dwelt in the Great Men sent into the world.” Ultimately, the Great Man Theory is little more than the historiography of hero-worship and means of elevating an elite group of upper class, Anglo-Saxon men to the status of demigods. As was pointed out by the turn of the century, these “Great Men” were products of the environments in which they grew up in and that socioeconomic factors just as much, if not more, to do with a person’s success than individual effort. However, if one does buy into the Great Man Theory even a little bit, one must also acknowledge it’s unspoken, yet equally important corollary: the Wretched Man Theory.

If it is possible for men and women of true genius and inspiration to change the course of history for good, it is also equally possible for their imbecilic counterparts to make a mess of history in equal measure. For every Churchill there is a Chamberlain–for every Caesar, a Nero. In American history, there is no better juxtaposition of the great and the god-awful than our nation’s 16th President, Abraham Lincoln, and it’s 17th, Andrew Johnson. It would seem that in politics, as in life itself, water always has a tendency to find its level, so it should not be surprising that the assassination of America’s greatest leader would lead to the inauguration of one of its worst.

Andrew Johnson’s brand of aggressive ineptitude made itself known on the national stage from the day he was sworn in as Vice President, only a short while before Lincoln was to make his Second Inaugural Address. Johnson, who had gotten pretty well liquored up the night before while attending a party given by Secretary of the Senate John Forney, arrived at the Capitol the next day with a vicious hangover and made his way to the office of his vice presidential predecessor Hannibal Hamlin, where he asked for some liquid fortification. Hamlin obliged, giving Johnson a bottle of whiskey from which he subsequently took two very hearty swigs before making his way to the Senate Chamber for his swearing in. What followed was the drunkest, most incoherent inauguration speech in the history of Presidential politics, as Johnson blathered on like someone’s alcoholic uncle giving a toast at Christmas dinner before being sworn in and planting an overzealous kiss on the Bible that was being used. Johnson’s performance was so embarrassing that several Senators advocated for his impeachment, prompting President Lincoln to come to his new Vice President’s defense, writing to a cabinet member that, “I have known Andy Johnson for many years; he made a bad slip the other day, but you need not be scared; Andy ain’t a drunkard.” 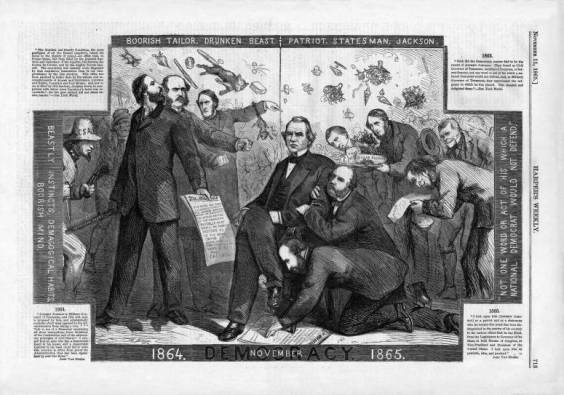 After only half a year in office, Andy had built up quite the fan base.

In point of fact, despite some of the accusations hurled his way during his political career, it would appear from the testimony of friends and colleagues that Johnson was not an alcoholic so much as he was a man who was fond of his drink and could take it or leave it depending on the circumstances. There are no other recorded instances of Johnson getting publicly drunk and it is quite likely that his liquored up oath of office had as much to do with the Typhoid Fever he was allegedly suffering from as it did the drink itself. No, Andrew Johnson was not a drunkard, but he was a bigot, a bombast and a lowdown dirty bastard. It was at this same swearing in that Frederick Douglass divined Johnson’s true character, and he did so without so much as speaking a word to him. As all of those gathered at the Capitol waited that day for the inaugural ceremonies to begin, President Lincoln went over to his running mate and pointed out the well-renowned abolitionist to him. Douglass wrote that upon seeing him, “the first expression which came to his face, and which I think was the true index of his heart, was one of bitter contempt and aversion.” Johnson would soon try to cover his initial reaction to Douglass with a demagogic smile, but the damage was done. At that very moment, Douglass knew that, “whatever Andrew Johnson may be, he certainly is no friend of our race.” Johnson would spend the entirety of his 4 years in office proving that assertion to be true.

From his quick and largely consequence free reinstatement of former Confederate leaders and endorsement of discriminatory Black Codes in many Southern states, to his vetoing of legislation that proposed civil rights increases and an extension for the Freedman’s Bureau, the old Tennessee War Democrat played the part of the white supremacist savior, effectively killing off any hope that the civil rights of blacks in this country would go beyond mere emancipation in the near future. The slaves had been nominally given their freedom, but Johnson was determined that they shouldn’t be given anything else. Under his watch, the rights and opportunities available to white men would not be extended to any other race and the ascendency of a new American hatred would begin. During his Third Address to Congress, Johnson arguably expounded more overt racially-charged ignorance than any President before or since, essentially outlining what would be the go-to talking points of the Post-Civil War and Jim Crow South for the next 100 years:

“The great difference between the two races in physical, mental, and moral characteristics will prevent an amalgamation or fusion of them together in one homogeneous mass. If the inferior obtains the ascendency over the other, it will govern with reference only to its own interests for it will recognize no common interest–and create such a tyranny as this continent has never yet witnessed. Already the Negroes are influenced by promises of confiscation and plunder. They are taught to regard as an enemy every white man who has any respect for the rights of his own race. If this continues it must become worse and worse, until all order will be subverted, all industry cease, and the fertile fields of the South grow up into a wilderness. Of all the dangers which our nation has yet encountered, none are equal to those which must result from the success of the effort now making to Africanize the half of our country.”

In the span of three years, our country went from a President who urged his fellow Americans to have malice towards none and charity towards all to a President who demonized one section of the population for the benefit of another and unironically warned of a future in which blacks treat whites with the same lack of compassion and respect that whites had always treated blacks. In Andrew Johnson’s words you can hear the contempt and revulsion for his fellow man burbling out in a sea of incoherent hatred. You can see his words spurring on the basest nature of the white southern plebians from which he sprang, settling in them a vicious enmity towards their black brothers and sisters that would cause them to ignore the grave injustices being perpetrated against them by their patrician white fellows. Most of all, you can feel that scar tissue that was built up after Gettysburg and Appomatox and Shiloh begin to slowly crack open, exposing those tender wounds of ours to infection and disease and rot. There would be no healing here.

Like Loading...
‹ A Minor Penalty For A Major Infraction: Ignoring The Harassment of American Indian Children in South Dakota
We’re Going To Miss You: Paying Homage To Jon Stewart on GOP Debate Night ›