Editor’s Note: At the present moment a small, but passionate group of community members on Chicago’s South Side are well into their third week of a hunger strike aimed at Mayor Rahm Emanuel in an attempt to get him to keep Walter H. Dyett High School in Bronzeville as a public school and reopen it as The Dyett Global Leadership and Green Technology High School. Dyett, which is the last open enrollment high school in the predominantly black neighborhood that was once the landing pad for tens of thousands of African-Americans during The Great Migration, is representative of the disturbing trend of axing public schools in minority neighborhoods on the city’s South and West sides and replacing them with schools run by private contractors that has emerged with particular vigor during Emanuel’s time in office. I thought that this would be a good opportunity to republish a piece I did on Rahm’s draconian rule last year that deals with many of the same issues that are forcing the Dyett High School hunger strikers to take such drastic measures to try and save the community school. Enjoy.

By the time I got to Chase Park, the first tricklings of a crowd had begun to congregate at the corner of Ashland and Leland Avenues. A small group of men clad almost exclusively in black rucked around in their backpacks, pulling out ghoulish Guy Fawkes masks and placing them atop their heads like actors preparing for a show at a Kabuki theater. On the street corner, a middle-aged Hispanic man wearing an old Army desert camouflage uniform and a floppy beige bucket hat waved around a giant wooden flagpole holding up the stars and stripes and—inexplicably—a portrait of George Washington while a few betatted, Anarcho-punkish women turned off of Clark Street and began walking towards the rally’s meeting point, each one holding a sign saying “ONE TERM MAYOR” by their sides. A few parents watching their children play on the park’s jungle gym disinterestedly watched their arrival, making sure to give the side-eye to one woman with a platinum blonde pixie cut who had the temerity to smoke her American Spirits within 500 ft of their offspring. 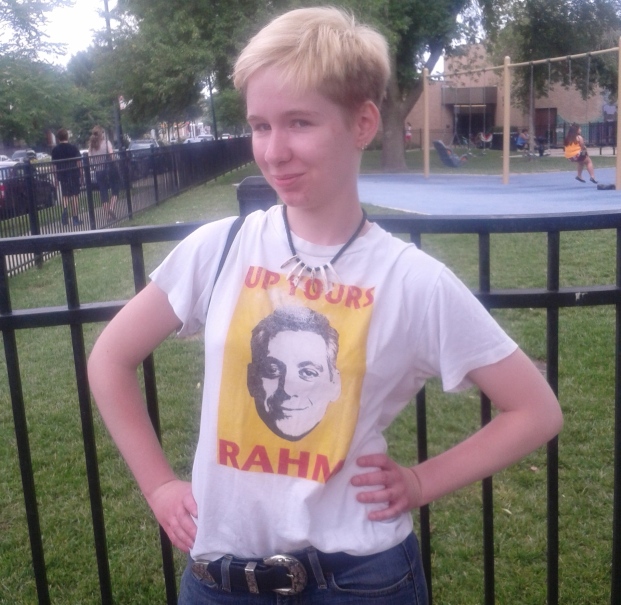 It was the 4th of July in 2013 and Occupy’s Chicago branch had organized what they dubbed, “A Block Party to Fight Austerity at Rahm’s House,” which was not so much a block party as it is a march and mini-rally. The Rahm in question was former White House Chief of Staff for President Barack Obama and current Chicago Mayor Rahm Emanuel, a man who once sent a dead fish in a box to pollster who was late sending back polling results and had a sign on his desk at The White House that read, “Undersecretary for Go Fuck Yourself.” Emanuel is the epitome of the establishment New Democrat: a opportunistic centrist with a background in fundraising and high finance who tries to mask his utter disregard for the poor and disenfranchised by being a vocal supporter of special interests like gun control and gay marriage.

Rahm’s CV is really rather impressive. He served as chief fundraiser for the campaigns of President Bill Clinton and Richard M. Daley, the man whom he would later succeed as Mayor of Chicago, and would take a break from politics in the late 90s to make over $16 million with the investment bank Wasserstein Perella. Emanuel has also been intimately linked with Goldman Sachs for most of his political career, a relationship that began in 1992 when he was on a $3,000 a month retainer from the investment banking firm at the same time he was convincing Goldman Sachs employees to contribute over $100,000 to Clinton’s campaign coffers. Over the ensuing two decades, Rahm’s ties to the financial elite would only strengthen, a development evidenced by the fact that he received more money from hedge funds, private equity firms and the larger securities/investment industry during the 2008 election cycle than any other member of the House of Representatives. A man of the people, he is not.

More than anything else, Mayor Emanuel’s abhorrent neglect of the Chicago Public School system during his brief time in office has galvanized the protesters who have affiliated themselves with the Occupy movement. At the march that day, a couple dozen were wearing their red Chicago Teachers Union t-shirts and many more expressed their dissatisfaction with the way the mayor’s office had been starving CPS of resources with words and placards. The blood feud began in earnest in September of 2012, when the Chicago Teachers Union went on strike for the first time in a quarter-century to protest the city’s proposed plan to, among other things, increase the influence of standardized testing in teacher evaluations, while amending the hiring practices regarding teachers who were laid off due to non- performance-based reasons like school closure. Much of the mainstream media focused on the fact that the union was fighting for pay increases for their members when the average salary of a CPS teacher was around $74,000, citing these supposedly exorbitant salaries as proof positive of the unmitigated bloat endemic to our nation’s underperforming public school system, but teacher pay grades weren’t the principle reason why they were striking. At the heart of the matter was job security, something that would prove to be largely illusory for thousands of CPS teachers and staffers in the coming months.

Two years ago, Emanuel and his administration closed 50 of the city’s public schools, the largest such closure in American history. The closures resulted in the firing of more than 3,000 CPS employees and the displacement of 12,700 students who now have to travel long distances through often dangerous neighborhoods just to reach their new schools. Of the students who attended the schools that were earmarked for destruction by the city in 2013, 88% were black, 10% were Hispanic and 94% came from low-income households. Unsurprisingly, the South and West Sides bore the brunt of the burden under Emanuel’s cuts, as 46 of the 50 shuttered schools were located in those parts of the city. All in all, Mayor Emanuel cut $162 million from the city’s school budget over the 2013-14 school year, citing an estimated $1 billion CPS budget deficit as the cause for his cuts. Meanwhile, while Emanuel claimed to be cash-strapped, the city was sitting on roughly $200 million in non-earmarked Tax Increment Financing funds, which are just gathering dust. And that isn’t even the worst part.

1. Separation of Church and That Other Thing: For those of you who aren’t familiar with Midwest’s collegiate landscape, DePaul University is a private school. In fact, it is a private, Catholic school that charges its 16,000+ undergraduate students over $30,000 a year in tuition and shouldn’t have a any problem raising funds for pet projects without help from a city government hemorrhaging cash. Having a major city provide more than $100 million in funding to a private, Catholic university while cutting over $160 million from it’s own public school system is the budgetary equivalent of a man with prostate cancer cutting back on his chemotherapy treatments so that he could afford to pay for penile enlargement surgery.

3. Nobody Cares: Due in large part to them having sucked so hard, for so long, Chicagoans generally don’t give a damn about Blue Demon basketball and they sure as shit don’t show up for games. According to the ticket records from Allstate Arena, where they’ve been playing for over 3 decades, DePaul averaged 2,900 fans per home game during the 2011, 2012 and 2013 seasons. To give you an idea of how pathetic this is,The University of Kentucky piled over 23,000 fans into Rupp Arena in 2005 for their school’s version of Midnight Madness, a kick-off event held by many universities that is essentially a glorified first practice to celebrate the official beginning of the season. Kentucky pulled in more than half of DePaul’s annual basketball attendance for a team practice session.

4. It’s Nowhere Near Campus: Keeping with the plan’s general theme of impracticality, Emanuel is planning on building the stadium near McCormick Place in the city’s Near South Side, over 6 miles away from the university itself. For a student living on campus, that’s 20 minutes away by car and over an hour away by public transit. I’m don’t have a Ph.D. in urban planning, but I’m pretty sure forcing students to make a 2 hour round trip journey to see a basketball game isn’t going to help out those already dismal attendance figures.

5. The Proposal Was Approved on the DL: In order to make sure his pet project got the green light, Mayor Emanuel snuck the authorization for the use of tens of millions of taxpayer dollars in building the stadium into a random committee report and neglected to tell any of the city aldermen that it was in there. So, when the chairman of the city council’s housing committee asked for the report’s approval, no one was aware that they were actually approving the use of $55 million in Tax Increment Financing funds to buy land for a new basketball arena. Emanuel immediately asked if there were any objections and, hearing none since there had been no time look at the report and debate it, promptly declared it approved. In addition to authorizing the purchase of land for the new stadium, city council members also unwittingly enabled the city to use the powers of eminent domain to purchase land from property owners in the city’s South Loop, regardless of if they want to sell or not.

6. It’s a Trap! Truth be told, DePaul Basketball has next-to-nothing to do with Mayor Emanuel’s infatuation with this stadium project. As The Nation’s Dave Zirin has pointed out, there is a very good chance that the stadium is simply a Trojan Horse for the new casino that Emaunel has his heart set on building beside the massive McCormick Place convention center. And, just in case you think I have some irrational vendetta against casinos and am jumping to erroneous conclusions here, Emanuel actually listed the casino as his number two priority for the state legislature, ahead of marriage equality and behind pension reform.

Ultimately, the march drew somewhere in the neighborhood of 200 people, a number that wouldn’t have been nearly so impressive if it weren’t for the cadre of about 40 of Chicago’s Finest that insisted on monitoring the protesters as if they were planning on storming the mayor’s house at 4228 North Hermitage with pitchforks and torches made out of the severed, flaming limbs of ill-favored city council members. If this were any other major Midwestern city, one could be forgiven for being taken aback by the police’s tremendous overreaction. But this was Chicago, the place where dissent goes to die a thousand gruesome deaths. Chicago is the city where Mayor Daley’s jackbooted thugs maced free speech into oblivion during the 1968 Democratic National Convention, gleefully beating the piss out of unarmed protesters with truncheons and billy clubs in full view of the entire world. It’s where Dan Rather and Mike Wallace, two card-carrying members of journalism’s all-century team, got sucker punched on the convention floor by spineless security guards while America looked on in bewilderment and horror, causing Walter Cronkite to remark in his muffled rage that, “I think we’ve got a bunch of thugs here, if I may be permitted to say so,” words that might not just apply to the events of that night, but to the totality of Chicago politics and to pretty much everything Rahm Emanuel’s done during his time in the mayor’s office.What else would you expect from the Mayor of Go Fuck Yourself?

Like Loading...
‹ Deinstitutionalizing Harry: How America Has Failed Its Severely & Persistently Mentally Ill
You Needn’t Pay Them Any Mind: A Brief Look at the Treatment of American Indians in US History ›