Home › US Politics › This Is Just The Beginning: How The 2014 Midterms Can Be A Clarion Call For The American Left

This Is Just The Beginning: How The 2014 Midterms Can Be A Clarion Call For The American Left

Calm yourselves progressives. Turn off the TV, shut off the iphone, log off of Facebook and try to stay away from the mewling hyperbole of the 24 hour news media. These midterms should be no cause for panic. Concern, perhaps, but not panic. In the end, the surge of conservative politicians to our nation’s capital is little more than a promissory note for future injustices, many of which would have continued unabated regardless of the the election’s outcome. Freedom or bondage has never been determined in ballot boxes with millions of little scribbles in printed rectangles, just as our civil rights were not won in the halls of Congress or the chambers of the Supreme Court. No, freedom was gained and civil rights won by millions of men and women who today have no names and no faces. Men and women who spilled their blood on Gettysburg grass and Selma streets to force our elected representatives in office to relinquish their hold on our humanity and self-determination. We have forced and will always be compelled to force the hand of those in power if we want to achieve anything like equality in this country. All these elections mean is that those hands will be clasped tighter. 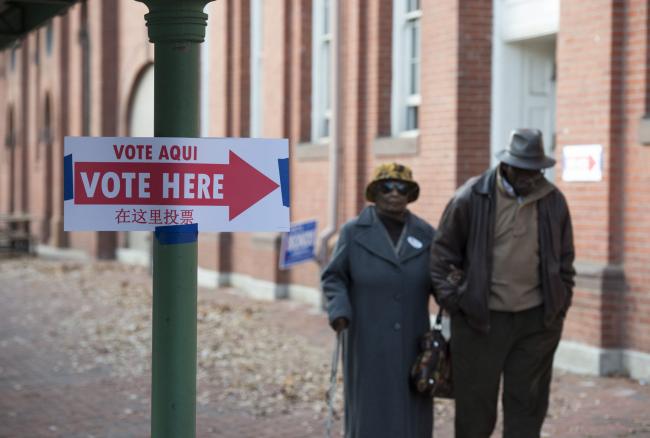 The 2014 Midterms: Disappointing For The Left, But Not Catastrophic (Photo Credit: UPI/Molly Riley)

Alison Lundergan Grimes; Mark Pryor; Mary Landrieu; Mark Begich; these are not the names of men and women who are champions of the disenfranchised and the discriminated. Many of us support them not out of infatuation with their policy positions or promises, but because the prospect of seeing their Republican opponents in Washington is so repugnant. All of the candidates that I mentioned above teeter precariously on the brink of conservative thought, balancing themselves on the thin wire of third way democratic thinking that would have been the province of the GOP before Reagan’s reactionary revolution turned them into a bunch of hysterical zealots. All of them tried their damnedest to distance themselves from that bad black man in The White House. They were all vociferous in their support of big coal and oil, and their vilification of the EPA. And two of them (Begich and Landrieu) were openly opposed to same-sex marriage.

All that being said, it still stings when these candidates are defeated (Landrieu will lose Louisiana’s run off election in December) and if we all had our druthers, we’d want them in the Senate in place of their conservative counterparts. I truly wanted to see Kay Hagan and Michelle Nunn win and I do get nauseous when I think about the fact that Joni Ernst, a woman who legitimately believes a UN sustainable development plan is secretly a conspiracy to destroy American sovereignty and shares her states rights beliefs with John Calhoun, will be in the US Senate. But, the fact is that none of these races will result in any massive systemic change to the way things operate in our nation’s capital. With President Obama’s veto pen at the ready and senate majority of less than 60, the 114th Congress will undoubtedly build upon its predecessor’s record as the least productive in our country’s history. 2016 will be here before you know it and the shifting demographics will make very fertile ground for a Democratic White House and a wave of progressive support for senate and house hopefuls to ride just like Republicans have in 2010 and 2014.

This is not the result we all hoped for and disappointment is to be expected, especially at the state and local levels. Not a single one of the candidates I cast votes for in my home state of Ohio was elected and my frustration at the incompetence of the state’s party leadership has only been furthered by the wins of amoral reprobates like Scott Walker and Rick Scott. These losses hurt, but even if Charlie Crist and Mary Burke had won, most of the fundamental realities of 21st century American inequity would not have changed. The top 0.1% of Americans would still hold a greater percentage of our nation’s wealth than any time since the Great Depression; the murders of black men by law enforcement in every corner of this country would still go untried; the Voting Rights Act would still lie in tatters on the ground before us; our slow, fossil fuel fed desecration of our planet would continue in earnest as it did before. Those fights go beyond the purview of a midterm election.

It is alright to despair today. Progressives can mourn for the loss of the Democratic senate majority and we can grieve the absence of candidates of quality and conviction in our statehouses and city halls. But we cannot despair tomorrow. We cannot wallow in self-pity and look at the world through the cynical, jaundiced eyes of the defeated. We should look not to the stolid halls of congress, but to the bustling, crackling streets of Ouagadougou for inspiration. Democracy does not happen on Tuesdays in November and our influence over the fate our nation is proportional to the amount of blood and sweat we put into it. Now, more than ever, is the time to make our voices heard; to hit the pavement and protest in the face of SWAT vans and phalanxes of armored cops. Now is when we must demand in word, thought and deed that all women in America have the right to choose and to earn an equal wage. Now is the moment we say “enough”.

Like Loading...
‹ Different Shades of Black: A Conversation About Race & Class in America & Abroad
The Last of The Gang to Die: How Democrats Lost the Deep South ›