Home › US Politics › Obama May Have Aimed For Greatness, But He’s Hitting Average

Obama May Have Aimed For Greatness, But He’s Hitting Average

On the evening of the New Hampshire Primary in 2008, after he had come in a close second to the woman who would eventually become his 1st Secretary of State, then-Senator Barack Obama addressed a crowd of his supporters in Nashua to reassure them that sometimes second place is victory and that their drive and determination in bolstering his campaign would bear fruit. This was almost five and a half years ago, a time before the Great Recession, when we thought that the two seemingly endless wars, the erosion of our civil liberties and the greatest natural disaster was the worst of George W. Bush’s legacy to us. It was also the time when the limpid exhaustion of our faith in government was found by the Obama campaign and nursed back to health like a foundling rescued from some Dickensian hovel. Those selfsame Chicago streets that saw the blood of innocents splattered upon them by Daley’s thugs back in ’68 had given us a new candidate who brought with him a Kennedy-esque sense of mission and purpose.

In January of 2008, we cried out for something to latch on to that could make us believe that this time would be different—that this time our voices wouldn’t sputter out into the gloam of the American experiment. Barack Obama knew how we felt and he rose to glory on a wave of hope and change, focus grouping his way to the Presidency of the United States of America. He knew what we wanted and he gave accordingly, which is why in the wee hours of that New Hampshire morning, he turned to his faithful and told them, “We’ve been asked to pause for a reality check. We’ve been warned against offering the people of this nation false hope,” pausing just long enough to let the siren’s song of that replenishing word sink in, before continuing, “But in the unlikely story that is America, there has never been anything false about hope.” And so, in lockstep with that quintessentially American narrative that conflates possibility with reality and glorifies the exception at the expense of the rule, Obama tapped into our need to believe that a man or woman egocentric enough to run for President would also be selfless enough to sacrifice his political capital for the welfare of his people. The first time around, we believed him because he was the agent of change we’d all been waiting for. The second time around, we believed him because we couldn’t bear the thought of believing anything else.

Considering that they were both lanky, oratorically gifted Senators from Illinois, I suppose the comparisons between Obama and Abraham Lincoln, were inevitable. Even before the Iowa Caucuses had officially set off the race for the Democratic nomination in 2008, prominent historians and pundits were already comparing the two men1. The fact that Obama has frequently voiced his admiration of the Illinois Rail-Splitter and used one of his bibles in each of his inaugurals probably didn’t help matters either, but I think it’s safe to say that someone as historically conscious as President Obama certainly aspires to be remembered in the same class of Commanders in Chief as Lincoln. The only problem is that, after a full term and change in office, Lincoln has actually come off looking more like Ulysses S. Grant.

Now, when I say that Obama’s presidency has born a great many similarities to Grant’s, I don’t mean it in terms of the leadership styles or policies, nor do I mean it as an insult. As a native Ohioan, I have soft spot for U.S. Grant on account of his being arguably the greatest President to ever come out of The Buckeye State, a distinction that is both a legitimate and a backhanded compliment. Ohio can claim that it holds the record for having the most Presidents born within its borders than any other state in the union, but it can’t really say that any of them were that great at the job2. What this adds up to is that Grant was a top-flight leader in a sub-par subsection of Presidential history, but was pretty much the definition of mediocrity when you include everybody else. On Nate Silver’s recent meta-analysis of Presidential rankings3, Ulysses S. Grant came as close to the statistical middle of the pack as you get, checking in as the 23rd best President in our nation’s history4. He doesn’t fair as well in the rarified air reserved for two-term Presidents, but he isn’t scraping the bottom by any means either. Grant ranks 16th among the 19 US Presidents to have served two terms, but he manages to avoid inclusion in the triumvirate of shame down at the bottom of the list, which consists of Calvin Coolidge (27th), Richard Nixon (29th), and George W. Bush (38th).

Ultimately, Ulysses S. Grant was a competent President who showed flashes of greatness and occasions for disgrace in equal measure. After a mercifully brief and oppressive interlude with Andrew Johnson after Lincoln’s death, Grant reestablished the federal government’s commitment to civil rights by passing the 15th Amendment, protecting African American suffrage, signing The Civil Rights Act of 1875 and using a combination of legislation and military force to break up the nascent development of the Ku Klux Klan. At the same time, Grant oversaw one of the most corrupt administrations in US history, a dubious distinction that is evidenced by an alarming 11 scandals in the federal government over his eight years in office. Granted, none of the scandals directly involved Grant in any way, but they were indicative of a larger culture of nepotism and under-the-table activity that would cast a pall over some of his accomplishments.

Over the past week or so, the Obama Administration has come under tremendous scrutiny for their association with or involvement in the IRS’s targeting of Tea Party groups and the Department of Justice’s seizure of AP phone records, scrutiny which is not unreasonable. Unlike the GOP’s obsessive-compulsive witch hunt concerning the attack in Benghazi, both of these incidents warrant the public’s outrage and should be remedied in a just and timely matter. No matter how severely you dislike a given group or how much you are appalled by the widespread misuse of the non-profit label for tax purposes, it is still unconscionable to pinpoint a specific ideology for IRS scrutiny while refraining from cranking up the heat on everyone else. Likewise, it’s not constitutional for an administration to steal phone records for more than 20 separate lines from a major news source and neuter the 1st amendment in the process. 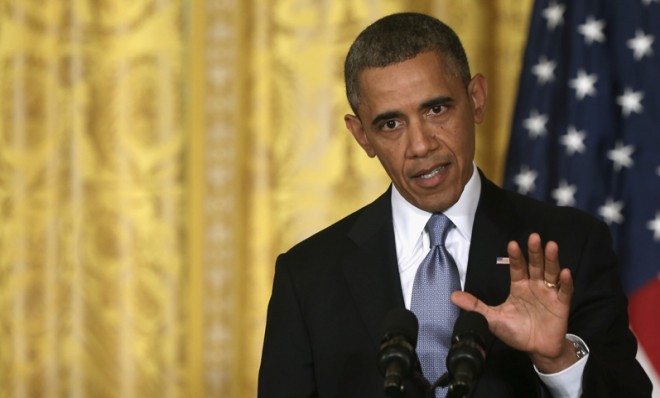 “Hold on now, I’m nowhere near as bad a the last guy. Perspective, please.”

All of that being said, these scandals aren’t earth shattering. The IRS has been used as a political tool for decades and government has tried to encroach on the rights of the press for as long as there has been one. Anyone describing President Obama’s actions as Nixonian needs to sit down and breathe into a brown paper bag until the vein in their foreheads stops throbbing uncontrollably. When Obama starts trying to break into Republican National Headquarters, secretly bugs everything that happens in the Oval Office and gets so knock-down, drag-out drunk that he can’t talk to David Cameron and deal with a crisis in the middle east5, then you can call the man Nixonian.

At this point in his presidency, Barack Obama hasn’t been bad enough to be considered a failure, but he hasn’t been good enough to be labeled a success. 2016 is a long ways away, but if his first term mirrors his second term, then he won’t escape the confines of mediocrity that he so desperately wants to avoid. During the Bush years, I remember telling folks that all I really wanted from my next President is someone who wouldn’t embarrass America on the international stage, someone who possesses competence, and someone who doesn’t make things worse. By and large, President Obama has met these expectations, but I’m not satisfied. I suppose it’s because the Bush years were like being in an abusive relationship that you desperately wanted to get out of, but you didn’t know how, and the Obama years have been like dating somebody who never answers your calls and has the sexual proficiency of a bag of Grape Nuts. When you’re with the abusive partner who makes your life a living hell, you’d give anything just to be with somebody who wasn’t that attentive and bad in bed. But, once you’ve gotten out of the awful relationship and have your life back, you realize that you don’t want a romantically challenged and often absent partner either. Candidate Obama promised us the world. He made us believe that he could transform Washington DC and make it work for the people instead having it work people over. However, President Obama has taken the hope and the change that he campaigned on and turned it into dour acceptance and stasis. We were led to believe we were getting Lincoln and we got Grant. We got average.

2Of the 8 Ohio-born Presidents, 3 died in office during their 1st term (William Henry Harrison, James A. Garfield and Warren G. Harding), 1 died during his 2nd term in office (William McKinley), 1 won The White House without winning the popular vote (Rutherford B. Hayes), 1 left virtually no historical footprint, and 2 are remembered more for positions they held outside of The White House (Ulysses S. Grant and William Howard Taft).

4For what it’s worth, George H.W. Bush was ranked as the 22nd best POTUS in history, securing his place (for now) with Grant as our Nation’s most average President.