A Sunday afternoon sky filled with sizzling fat drops rising up in the sausage smoke air—ballcapped kids half-running around in their kid-sized jerseys with their kid-sized gloves, floppy cargo shorts hanging down at mid-calf like the bottom of a pair of rodeo clown overalls. Ushers stand guard at the tops of aisles like geriatric sentinels keeping a glaucomic eye out for seat poachers and lost, fanny-packed sheep. The outfield grass is cut higher and tighter than a Staff Sergeant’s sunburnt dome and the infield dirt looks like a lifetime’s supply of Ovaltine that’s been spread out and sprayed down with a garden hose. Slowly, the sea of collapsable blue plastic around you fills with your lightly drunk, sugar high fellows, heading down to their seats with boxes of bratwurst, bracketed by $9.00 beer and $6.00 soda in a limited edition souvenir cup. Soon after they sit down, everyone stands back up to face the flag and hold their hats over their hearts while some unknown local singer tries to stretch an extra two seconds out of her rockets red glare and we follow along in an off-key whisper.

Oftentimes, we slog through a Star-Spangled Banner as yet another patriotic piety that we need to observe for observance’s sake, but we also have moments like the one at a Bruins game shortly after the Boston Marathon bombing1 that will raise the arm hair of even the most jaded American. At the very worst, our National Anthem is just another obstacle between me and a ballgame and, at its best, it’s as inspiring as the “Change” speech from Rocky IV2. Honestly, and I’m only half-joking here, if I had my way we’d ditch The Star-Spangled Banner as our anthem and replace it with John Fogerty’s Centerfield. I mean, when you think about it, no really thinks The Star-Spangled Banner is a “great song” and, with an exception for Marvin Gaye’s earth-shatteringly smooth rendition at the 1983 NBA All-Star Game3, I have never listened to the song on purpose. Centerfield, on the other field, is one of the most quintessentially American songs ever by one our favorite musical sons and, it would allow capacity crowds of 70,000 people to sing, “put me in coach…I’m ready to play (clap)(clap)(clap)…today” in unison.4

Regardless of my picayune fantasies about changing our National Anthem, the main thing I’m trying to get across is the fact that the anthem has a certain gravitas and history that render its use at sporting events appropriate. Where is becomes inappropriate is when organizations decide it would be nice to splatter even more jingoistic juice throughout the course of the game to provide us with regular reminders of how awesome America is. I went to Nationals Park a couple of weeks ago to see my Cincinnati Reds put a hurting on the Montreal Washington Expos Nationals and was a little freaked out at the level of forced patriotism on display. For instance, in between innings, the jumbotron zoomed in on a group of in uniform servicemen and women apropos of nothing in particular, and told the crowd to give them a hand for their service. Naturally, pretty much everyone in attendance began clapping for a minute or so and thought nothing of it, despite the fact that it’s a bizarre ritual with little foundation in each individual clapper’s personal reality. The fact of the matter is that almost no one in the stadium had any direct knowledge of the servicemen and women in question and were applauding them based solely  on their vocation. We know nothing about these men and women beyond the uniforms they wear on their backs, so really, we’re applauding an abstraction of a soldier rather than the actual soldiers themselves, ritualistically providing an entire sector of society with blind appreciation–an approach which seems a bit dubious. Yes, 417 US soldiers were killed in Afghanistan in 2011, but in that same year, 738 construction workers and 749 transportation and warehousing workers were killed as well5. Clearly, it’s important that we let the men and women of our armed forces know that we appreciate what they do for us, but the same should hold true for truck driver or a pipefitter. 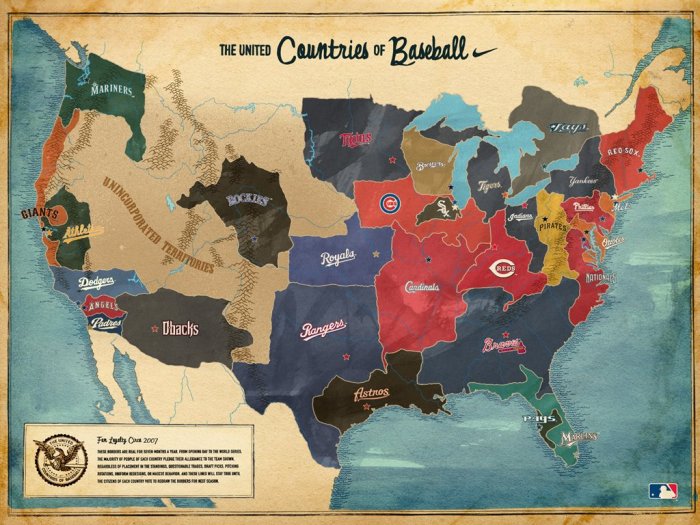 Why was I never shown this map in 7th grade geography

Had the military shout-out been the only thing beyond the pale of traditional sporting nationalism, then I wouldn’t be writing about it. However, when the last out had been recorded in the top of the 7th and I readied my voice for a raucous and off-key rendition of Take Me Out To The Ball Game, I noticed some folks taking their hats off and turning towards the American flag out in left-centerfield. The next thing I know, some disembodied voice comes over the PA system in a reverent and slightly somber tone, singing, “O beautiful, for spacious skies, For amber waves of grain…”. And I just sat there. I sat there in my seat and said, “son of a bitch,” to no one in particular, resolved not to get up and placate this self-indulgent, propagandistic bullshit—but then my friend looked over at me and said we’d make a scene if we didn’t get up and that it wasn’t worth the trouble, so I got up.

I don’t know when this became a custom in baseball stadiums and it could be something peculiar to Nationals Park—though I doubt it—but telling folks to sing America The Beautiful during the 7th Inning Stretch is some low down dirty shit. What, were you afraid I forgot what country I was in during the half hour that passed since the Pringles can-shaped George Washington mascot won the President’s Race6? Did I fall into a coma for 15 years and wake up in The People’s Republic of America? What fresh Soviet hell is going on here? Is Take Me Out The Ballgame by its lonesome not American enough all of the sudden? Maybe next time we can have a hologram of Marilyn Monroe blowing Jack Kennedy on the pitcher’s mound while B-52s airdrop thousands of piping hot apple pies into the stands. That would beat the piss out of peanuts and cracker jacks, much less fruited plains and pilgrim’s feet.

Or, we could just sit back and watch a baseball game. I suppose that’s always an option.

4Other songs I will accept as replacement anthems: “Born to Run” by Springsteen, “America” by Simon & Garfunkel, “Freedom” by Richie Havens and “Coming to America” by Neil Diamond.

6 My problem with the President’s Race (of course I have a problem with it) doesn’t have anything to do patriotic guilt tripping so I couldn’t find a place for it in the article, but in case you were curious, here it is: For those unfamiliar with the race, it happens in-between innings at every Nationals game and features 5 stadium employees dressed up as exaggerated and cylindrical representations of George Washington, Thomas Jefferson, Abraham Lincoln, Teddy Roosevelt and (new this year) William Howard Taft who have a race around the outfield wall. This, in and of itself, isn’t terrible, except for the fact where the blatantly and unapologetically rip off The Sausage Race that Milwaukee Brewers have been having since 1991. And, yes, I realize the Brewers didn’t invent the costumed footrace, but what other explanation is there besides mimicry is there for having all of the Presidents be shaped like elongated Pez dispensers or, I don’t know, A SAUSAGE!