Home › International Affairs › America and Israel: Partners Who Deserve Each Other

America and Israel: Partners Who Deserve Each Other

I will be the first to admit that I am woefully ignorant when it comes to the intricacies and day-to-day developments of the conflict in Israel and the Palestinian Territories. With the exception of major events like the recent hostilities and flexing of military muscle in Gaza this past November, the Israel-Palestine conflict exists to me only as a ubiquitous and inflexible presence in the international political climate. Israel has become an abstraction in the American subconscious, more often than not manifesting itself as a maelstrom of jingoistic anti-arab sentiment. The Obama Administration might talk of supporting a “two-state solution”, but it is exceedingly rare to see any American political figure or commentator discuss what exactly that solution would look like and what specific role the US government would play in helping it come to fruition. We are very keen to support the idea of Israel while being reluctant to acknowledge her reality.

For those of you reading this who are not American citizens or, at the very least, are not attuned to our nation’s peculiar brand of political rhetoric, it is very hard to overstate how much Americans by-and-large grant a blank check of appreciation and support to the Israeli people. If it is possible, the vast majority of our political leaders actually exceed the volume of general US reverence for the state of Israel, doing everything short of burning Khaled Mashal in effigy to show their support. Any discussion of Israel during our recent presidential elections quickly devolved into geopolitical version of The Dating Game, with President Obama and Mitt Romney vying for Bibi Netanyahu’s affections while showering the voting public with the same platitudes we’ve heard for decades now.

The irony of modern American relations with Israel is that much of this sycophantic attitude towards the Jewish state is motivated in large part by the belief structure of evangelical Christians who hold that, among other things, the existence of the state of Israel is necessary for the Second Coming of Christ. This is not to say that Evangelical Christians are in any way disingenuous in their support of Israel, but rather to point out that the motivations behind that support have very little to do with Israelis themselves. Thus, you are left with an extremely philo-semitic group of people who have very little personal interaction with the Jewish population in their own country and believe that all Jews need to be converted to Christianity.

A map outlining Israeli settlements in the West Bank

As a result of the byzantine reasoning underpinning much of the pro-Israel movement in this country, there are few members of that movement who actually care about Israeli-Palestinian relations beyond the dichotomous and overly-simplistic question of, “are we winning or are we losing?” And, in case you were still in any doubt, winning primarily consists of ensuring Israeli dominance in the region while losing involves any manner of progress towards the creation of a legitimate Palestinian state. There is little room for nuance and sober discussion concerning the issue and our reticence for compromise has only been emboldened by the explosion of Islamic terrorist groups in the Middle East and Africa. Since the attacks on September 11th, the degree of polarization in America on the question of Israel has grown wildly and in direct proportion to the rise of anti-muslim sentiment. For the majority of Americans, the possibility of objectively assessing relations between Israel and Palestine has been eliminated in ways dissimilar from that of any other Western nation. A recent BBC poll on international attitudes towards Israel showed that the US was the only country in the West with a mainly positive view of Israel and the only nation to see its general opinion of Israel rise in the past year.1

In light of the recent developments in the stretch of highly controversial land known as E-1, I think it’s important to note two points, the first of which being that Prime Minister Netanyahu’s settlement plans in the area have not been extensively covered in the mainstream US media and, secondly, that I don’t believe it would affect public sentiment at all if they were. For those of you unfamiliar with the situation, E-1 is a small but crucial piece of real estate that lies between East Jerusalem and the Israeli settlement of Ma’ale Adumim in the West Bank. While only 4.6 square miles in size, roughly equivalent to the Mall of America, E-1 is an extremely valuable plot of land whose fate could put a severe, and possibly fatal, damper on relations between Israel and Palestine. About six weeks ago, Prime Minister Netanyahu authorized the construction of around 3,000 additional housing units for Israeli settlement in the E-1 area, a move widely considered to be retribution for Palestine’s admission by the United Nations as a “non-member observer state” the day before. What makes E-1 so crucial is that an Israeli settlement there would link East Jerusalem to the Ma’ale Adumim settlement, effectively dividing the West Bank in half. This West Bank bifurcation would cut the Palestinians off from Jerusalem and all but render the creation of a contiguous Palestinian state. 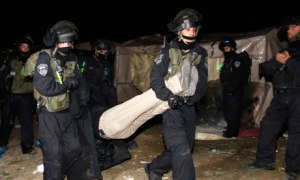 That the international community has decried Prime Minister Netanyahu’s autocratic machinations in E-1 is to be expected, but this latest action was so unconscionable that even the US openly condemned it. Of course, condemnation is all well and good, but is perfectly useless if even the threat of sanctions remains off the table. There was a great deal of talk about where the United States and the international community would draw a line in the sand regarding Iran’s nuclear ambitions, but there has been no discussion, at least in the US, about where we draw the line concerning Israeli violations of international law and efforts antagonizing the peace process in the region. According to international law, the 100+ Israeli settlements in the West Bank are illegal and, while the Obama administration has openly criticized Israel’s expansion efforts in East Jerusalem and the West Bank, they have still failed to provide any evidence that such criticisms aren’t simply hollow posturing.

Early on Sunday morning, Israeli border patrol officers stormed into a Palestinian encampment in the E-1 zone and forcibly removed all of its inhabitants. The 200 or so Palestinian activists living there had created a small tent city which they named Bab al-Shams (“gate of the sun”) in protest of Prime Minister Netanyahu’s plans for expansion. The tents were erected on Palestinian-owned land with the full permission of the landowners and the inhabitants of Bab al-Shams were there as non-violent protesters, armed with cups of coffee and blankets rather than assault rifles and grenades. On Saturday night, Prime Minister Netanyahu demanded that the Israeli Supreme Court overturn an injunction granting the protesters permission to stay settled while a thorough investigation was conducted, and ordered the area to be declared a closed military zone. Within hours the tent city of Bab al-Shams was shut down, with several protesters sustaining injuries as they were taken away during the early-morning raid.

Before I go, let me leave you with a general rule of thumb that will serve you in good stead when it comes to evaluating political crises. In any struggle, irrespective of all other circumstances, if you find yourself supporting a side that uses their military or law enforcement to forcibly remove civilian activists from engaging in acts of non-violent protest, then you’re supporting the side of injustice and censorship. Non-violent protest is the medium of the oppressed and the righteous. Suppression of those protests is the desperate resort of the despotic and tyrannical.