It is my sincere hope that when Secretary of State Hillary Clinton said on Thursday that an AIDS-free generation is within our sight, she was simply engaging in a bit of rose-tinted rhetoric to raise enthusiasm for World AIDS Day and portray the Obama administration as being an ardent advocate for the HIV+ community. This may seem an odd thing to hope for, but eliminating the possibility of the realpolitik leaves us with a scenario in which Secretary of State Clinton truly believes that we are on the cusp of an AIDS-free generation. Such a sentiment is certainly laudable, but it is also so thoroughly divorced from anything like reality that it suggests Madam Secretary has inadvertently conflated the meanings of the words belief and hope. You see, we all hope for a great many things, regardless of their likelihood of occurring. This is because hopes don’t have to be grounded in fact: I can hope that I win the Powerball lottery and there’s nothing inappropriate about that. However, if I buy a Powerball lottery ticket and believe I’m going to win, then I have crossed from optimism over into full blown delusion. To hope that we are closing in on a generation who will never experience the ravages of AIDS is a normal reaction to the suffering involved in such a horrific pandemic. To believe that AIDS is close to being eradicated when there is no evidence or resources to support that claim is irresponsible.

I think it is fitting that the PEPFAR Blueprint for Creating an AIDS-free Generation is divided into chapters that focus on a set of “road maps” to affecting change in the fight against AIDS. The last time I can remember a road map to anything that was widely publicized by the State Department, President George W. Bush was heralding the Road Map for Peace between Israel and Palestine as a framework for achieving a stable Middle East. Fast forward to today and much of Gaza looks like Stalingrad after the Luftwaffe used it for target practice, while the increasingly unreasonable Prime Minister Netanyahu has begun moving forward with plans to expand Jewish settlements into East Jerusalem, a move that would separate the West Bank cities of Ramallah and Jerusalem and effectively end any hope for a two-state solution. If I were one of the writers of the PEPFAR Blueprint, I would have suggested using imagery that wasn’t so closely connected to the world’s most intractable and divisive conflict.

All semantics aside, there is nothing in Secretary Of State Clinton’s plan that tells us anything that we didn’t already know or that essentially changes the dynamics of the fight against AIDS in 2013 and beyond. The blueprint calls for a) increases in HIV treatment and prevention efforts, b) working with other nations and private/faith-based organizations to expand those treatment and prevention efforts quickly, c) providing gender equitable HIV services, d) ending the stigma associated with HIV/AIDS while increasing access to care and e) encouraging research into new scientific advances while creating measurable benchmarks for outcomes to monitor progress in fighting the disease. I will now encourage you to join me in a rousing chorus of “no shit!” 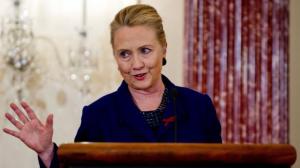 Did HIV advocates and providers really need Secretary of State Clinton and the State Department to come out with a 54-page document telling them that they need to provide more HIV treatment and prevention services while getting rid of stigma? We already have the foundations for effective HIV treatment and prevention efforts being put into practice on the ground right now. This is supposed to be a blueprint for getting to an AIDS-free generation and all the US government has given us is a foundation that we have already begun implementing. We don’t need a foundation; we need mortar and bricks and load-bearing walls. I don’t want to hear about how an AIDS-free generation is in sight when the Obama administration has actually decreased Global Health Initiative funding over the past four years while letting overall fiscal support for HIV-related programs stagnate1.

Please don’t mistake my displeasure with the actions of the Obama administration and Secretary of State Clinton for pessimism regarding the future of the HIV+ community and the prevention of further infection over the coming years. The pharmaceutical treatments and testing programs that have been implemented in the US and abroad were all-but-unimaginable two decades ago and they have given millions of positive men, women and transgender individuals the ability to live the lives they were meant to live. Through high-profile advocates like Magic Johnson, Elton John and the Clintons, awareness and acceptance of AIDS has certainly increased on a global scale. This is progress, but it is slow, hard-won progress that doesn’t lend itself to hyperbolic statements about seeing the end of AIDS on the horizon. In football terms, we don’t have a rocket-armed quarterback to launch a bomb 2/3 the length of the field for a quick score. The fight against AIDS is nothing but 3 yards and a cloud of dust; it’s not pretty and it sure ain’t quick, but it wears the defense out until it doubled over, covered in bruises and gasping for breath.

Let’s look at Sub-Saharan Africa for a moment. HIV is no longer a certain death sentence in that region of the world hardest hit by the epidemic and AIDS-related mortality has declined by 31% since its peak in 2005. Beyond that, prevention measures have been working very well in the region, which has seen a 22% drop in new infections over the past decade. This is tremendous progress, but it is certainly not cause for the kind of feckless optimism proffered by the State Department. In 2011, there were 2.5 million new HIV infections worldwide with a further 1.7 million AIDS-related deaths. Among the 16 Sub-Saharan African countries provided by the PEPFAR Blueprint to show the growth of HIV treatment in the area, nearly 500,000 more people were infected with HIV in 2011 than were put on treatment. For every 2 Sub-Saharan Africans that were introduced into treatment, another 3 were newly infected.

Clinton has said that “the tipping point” in the epidemic will be when we manage to get the number of new infections below the number of HIV+ individuals put on treatment. However, anyone proficient enough to complete your average SAT Math word problem should be able to see that such a statement is simply not true. Currently, there are 34 million HIV+ people living on this planet and around 15 million of those people know that they’re positive. Of those 15 million positive individuals, 8 million are currently on antiretroviral therapy (ART)—an amazing number considering only around 400,00 people were receiving ART when PEPFAR was created in 2003. But, since HIV is currently a chronic condition, the numbers of people on ART will have to continually skyrocket upwards with the hope that no one who is currently in treatment drops out while adding previously untreated patients. If we simply reverse the current figures in Sub-Saharan Africa and say that we can get around 1.3 million new people on ART while reducing new infections to 800,000, it will still be many decades before we could start thinking about “an AIDS-free generation”.

The amount of money and time and infrastructure that it requires to provide antiretroviral therapy for 34 million people is simply untenable. I’ve mentioned this before, but Jonas Salk discovered the vaccine for Polio 60 years ago and that disease is still with us. That was a vaccine that only had to be administered in 4-5 doses. HIV+ individuals have to take their medication every day for the rest of their lives. The hope for anything like an AIDS-free generation lies in prevention and vaccination, not treatment. How do you suppose we can make that happen when much of the world (including America) still teaches abstinence-based sex education and our federal HIV budget only allocates 3% of its funding for prevention? Antiretroviral treatment represents nothing less than the gift of life to someone infected with HIV, but it can’t provide the same thing to those generations still to come unless they get infected themselves. You can’t build much with a blueprint like that.

1In President Obama’s first budget request for FY 2010, HIV-related spending was at $26.2 billion while his latest request for FY 2013 was only $28.4 billion. When inflation is taken into account, this amounts to an increase of just over $150,000 in four years. Compare this with the first four years of the Bush administration when, after accounting for inflation, federal HIV funding was raised around $4.5 billion.

Like Loading...
‹ It’s Time to Sell the Straight Talk Express for Parts
The Deep South: Geography as a Risk Factor ›