“A rat in a maze is free to go anywhere, as long as it stays inside the maze.” – Margaret Atwood

Every couple of months it seems as if some superbug pops up in the news as the latest evidence of mankind’s impending and messy destruction. At the start of the summer, every major news outlet appeared contractually obligated to have a story rhetorically asking if the parasitic infection Chagas was, “the next HIV/AIDS?” Of course, journalists reporting on the insect-borne disease knew that it wasn’t in the same league as HIV in terms of being a public health risk, which they inevitably told you after you had clicked on the link and gotten halfway through the first paragraph. Most recently, 32 deaths resulting from the Ebola virus in the Democratic Republic of the Congo set off a mini media firestorm with the typical catastrophizing about the disease rampaging through major cities and towns. I remember in my Freshman year of high school we were required to read the non-fiction scientific thriller The Hot Zone about the origins and contagion risks of Ebola and all that accomplished was making an entire classroom of 15-year olds develop an OCD about hand washing that would have done Lady Macbeth proud.

It’s not my intention to be flippant or downplay the seriousness of Ebola, but I don’t think we should be trembling in our booties at the prospect of the whole world bleeding out from this particular demon super-virus. The reason I say that is because Ebola is really, really stupid. It’s like an overeager dog who eats an entire ice cream cone in two bites and then has to puke it back up because his body wasn’t ready for that much frozen dairy goodness all at once. The mean incubation period for Ebola is about 13 days, which is (hopefully) entirely too fast for a virus that lethal to spread itself. It’s so damned set on killing its host that Ebola never bothers to keep to host alive long enough to effectively transmit the virus to the rest of the population.

HIV is a different story though, because HIV is patient and HIV is plodding. It is a virus that has infected approximately 34 million people worldwide and killed 30 million more through dint of being quiet and unassuming. After all, it’s rarely HIV that actually kills a person. It merely creates the biological conditions whereby some disease that has no earthly right to can kill you. HIV is like a Mexican drug lord who is always 5 or 10 people away from the poor runner who gets caught by the DEA on I-95 with a truck full of horse. We know how to treat thrush and pneumonia and cryptococcal infections, but we’ve never truly gotten to virus that makes all those things possible.

When someone is infected with HIV, the virus doesn’t stand at attention and announce it’s arrival to the world. At worst you get what seems like a hellacious bout of the flu and then you’re right as rain in a week or two. It could be up to 15 years before the HIV in a person’s body develops in AIDS. Then again, it could happen within a year. Regardless of whether it’s progression is fast or slow, there is always that window of time where someone could be transmitting HIV to their partner—that space where the disease has yet to make itself known to our bodies, but has already begun hijacking our cells.

In India, there has been a great deal of talk about how to shut this window of transmission time and stop HIV from running roughshod through their country. There are currently 2.4 million Indians living with HIV, which is a staggering number, even if it makes up a smaller percentage of their population than many nations. Just under half of all the HIV+ people of Asia live on the Indian subcontinent and it has resulted in a public health disaster for many regions of the country. 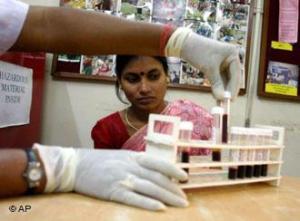 Waiting is always the hardest part

A solution which has been debated widely in India and other nations with swelling HIV epidemics is the institution of mandatory HIV testing. In the case of India, such testing would be required of all couples who wished to be married. The central idea behind such a policy is that HIV is spread predominantly through the either uninformed or disingenuous actions of one person upon another. In such a scenario one or both of the people involved are unaware of their HIV statuses and, so the reasoning goes, transmission can be avoided through testing and education.

One massive problem with this approach, at least in regard to engaged couples, is that it doesn’t seem to take into account the fact that the HIV antibodies which conventional HIV tests look for can take 3-6 months to show up in the results from an oral swab or blood draw. That is why all HIV testers strongly recommend that people abstain from sex or use protection and return for a follow-up test in 3-6 months to make sure that the initial test wasn’t a “false negative.” If mandatory HIV testing before marriage was instituted, you’d have to make them wait at least 3 months to get married so as to account for the possibility that one of them was newly infected.

However, this time lag issue isn’t nearly as troublesome as the cadre of civil liberties and human rights violations caused by such a policy. I understand the intent behind proponents of mandatory testing, I do. For the most part, everyone just wants to make us safe. But, that’s not how it works. Without free will, taking an HIV test becomes a profoundly stigmatizing tool that inevitably increases HIV prevalence through it’s power to shame and destroy.

If you don’t believe me, then just walk through this hypothetical example. Say, you’re a 24 year old Indian man who has been set up in an arranged marriage to a beautiful woman who you’ve known your entire life. You slept with a few women in your teens and early twenties and, since only 27% of Indian men report ever using using a rubber during premarital sex, odds are that you forgot to wrap it up a couple times too. Before your wedding day, you have to go down to a local health clinic and get your mandatory HIV test. After a waiting about half an hour, a nurse comes out and informs you that your fiance is negative and that you’re positive.

The wedding’s already been paid for and planned out. Every member of your close family and all your friends have known about it for months. What happens then? It almost goes without saying that in a buttoned-up culture like India’s that your fiance ain’t marrying you now. And, even if she agrees not to tell anyone in her family, people will be quick to figure out what went down. You go down to get your marital HIV test and later that day the wedding’s called off? It doesn’t take a Rhodes Scholar to figure out what happened there and now you can rest assured that you will likely never find a wife as you have now been marked as HIV+ in front of the whole community.

I know I might sound pessimistic and devoid of faith in the redemptive capabilities of man, but to create a mandatory HIV testing system is to create state-sponsored prejudice. When I elect to get an HIV test taken I am saying to myself that I want to take ownership over my body and gain knowledge about myself. If somebody makes me take an HIV test it suddenly becomes a pass/fail affair. There are consequences now beyond having to manage a chronic and potentially fatal disease. Suddenly, my self-worth is being tested along with my saliva and blood.

In and of itself, knowledge of one’s HIV status does nothing to stop HIV from spreading. There are millions of people across the world who are positive and who know they are positive, but who continue to engage in harmful, high-risk behaviors because of denial and guilt and self-loathing. In order to give someone the chance to live well with HIV, we must give them the opportunity to accept themselves and their status first. With mandatory testing I can guarantee that those opportunities will be few and far-between.

Like Loading...
‹ They Have To Take You: Mitt Romney and ER Healthcare
Ruthless, Heartless & Running for Office ›