“Take a shot, go for it, take a risk, get the education, borrow money if you have to from your parents, start a business…” – Republican Presidential Candidate Mitt Romney, May 2012

There is one fundamental difference between the two hopelessly out of touch remarks that are printed above, and that is that only one of them actually happened. If you’re wondering which of these nuggets of wisdom slipped passed it’s doltish creator’s lips, I’ll give you a hint: you can find the footage of it taking place on YouTube. And, last time I checked, the Bourbon Monarchy had yet to invent the moving picture or the internet, although they were setting now-broken records for unconscionable decadence. Poor Queenie got a particularly bad wrap on account of history’s seeming disregard for things that took place in the past and has since been canonized as the Patron Saint of Wealthy Bimbos, paving the way for generations of hopelessly out-of-touch monied women to act like aristocratic douchebags and not have their heads lopped off in the middle of Times Square.

As those of you who are Western European and/or socialist already know, today is July 14th, which means that Bastille Day is once again upon us. If you were high during your high school European History course or simply didn’t give a damn, Bastille Day is a celebration in commemoration of the most symbolic act of The French Revolution, when a bunch of hungry, impoverished and pissed off Parisians stormed the Bastille Prison and began shouting about having rights and wanting equality or some such thing whilst beating the crap out of the French Guards. Marie Antoinette’s non-quote is often seen as a prime symbol of the blatant disregard for the livelihood of the people of France that was held by the ruling classes of the day.

In those ancient times, only 2% of the French population was part of the nobility or 2nd estate and had a received preferential treatment in every aspect of life in addition to being in total control of all legislative action in concert with the King. For instance, in those days, noble families were exempt from many different forms of taxation. They did not have to participate in forced road labor like the middle and lower classes did, and they weren’t subject to the Taille, the most basic tax in France based on land holdings. This last tax exemption was especially crucial to the French nobility because, while they only made up 2% of the population, they held about 20% of all French land, which was the principle source of wealth in the 18th century. Thank God we don’t live in a place like that anymore.

America, on the other hand, is a land of freedom and opportunity and flaming Bald Eagles shooting M-16s at Yemeni terrorists. Things have evolved greatly over the past 223 years. Today, the top 1% of Americans own a mere 42% of the country’s wealth and it’s not like they get preferential tax treatment or anything, right? That whole bit about not having to do manual labor for the government is gone too. It’s not like our nation’s wealthier classes can buy their way out of a draft or avoid military service during wartime anymore. And our government has to be more representative of the median American income now. Wait…what was that? 58 percent of all members of congress of are millionaires? Well, it’s better than 100%. Take that 18th century France!

So what have we established thus far? Well in terms of wealth disparities between the uber-rich and the rest of society, the United States in 2012 is more than two times more unequal than 1789 France. And, if Mitt Romney is any indication, today’s uber-rich are even more ignorant and bombastic than their laced and powdered compatriots. At least Marie Antoinette had the common sense to not open her painted mouth and profess her ignorance to the plight of her people in public. She had to wait for Jean-Jacques Rousseau to write a fallacious auto-biography and over two centuries of promoted misinformation for that to become the “truth”. And what happened to her? She and her squat, socially maladjusted hubby got de-domed by a giant straight razor and some gravity. On the flip side, Romney’s got a very legitimate chance at becoming the 44th President of the United States in five months time and isn’t lying on the Washington Mall with blue blood spurting out of the place where his head used to be. 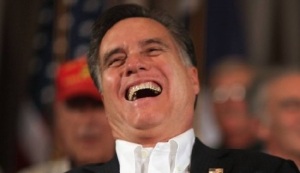 “Ha! He bought his wife a Lexus? What a cheap-ass!”

People think Marie Antoinette was decadent, but that Austrian tart had only scratched the surface of what opulence was. Much has been made of her lavish spending on jewels and clothing and the “gift” of her own little bucolic chateau on the grounds of Versailles, Le Petit Trianon, but ultimately it was just child’s play. Le Petite Trianon, was in fact built for Louis XV’s mistress and was re-gifted to Marie when she wanted a place to garden and play rural peasant for a day. The Romney’s may have found Versailles to be a little to restrictive. They currently own six properties all across the country: one by Dick Nixon’s old stomping grounds in La Jolla (which he was going to triple in size until campaign advisors nixed the plans), two in the Boston area, two lakeside residences in New Hampshire and a ski lodge in Utah.

As it turns out, Romney would be far and away our nation’s richest commander-in-chief, with an estimate net worth by Forbes of $230 million ($330 million if you count the money set aside in trust funds for his 5 boys). The Obamas are no slouches with an estimated worth of around $6 million, but the fact that $6 million is being considered modest in this context is a tribute to just how filthy rich Mitt is. Yet, instead of gathering up pitchforks and bayonets and charging through the streets of La Jolla to batter down his reinforced security fence and demand appropriate representation in government, around half of the country is prepared to make him our President. I’ve always understood why the French chopped off Marie Antoinette’s head. What I don’t understand is why so many of us want to put a crown on Mitt Romney’s instead.

Like Loading...
‹ deepsouth review in latest issue of A&U Magazine
Imprison & Invest: Private Prisons in The Age of Incarceration ›